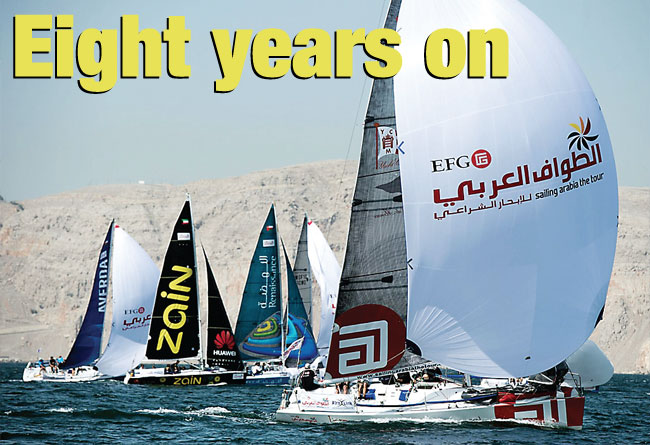 In 2008 Sultan Qaboos bin Said gave the green light to set up a groundbreaking initiative to reinvigorate Oman’s maritime heritage and introduce sailing to a new generation of youngsters. Eight years on, things couldn’t be going better for Oman Sail.

From its humble beginnings Oman Sail has grown into one of the Sultanate’s – and the sailing world’s – great success stories, helping more than 20,000 Omani men, women and children to discover the sport. The programme’s goal? To develop homegrown talent good enough to compete at the top of sailing, be that an Olympic Games, an America’s Cup or in a Volvo Ocean Race. It’s a mission well on the way to fulfilment, with its sailors regularly representing Oman in international regattas and top campaigns.

But Oman Sail’s beating heart is its flagship Youth Programme, getting youngsters out on the water for the first time and nurturing talented junior sailors. Four sailing schools (with three more to come) dotted round the country are abuzz with children taking their first steps in the sport or developing their racing skills. Through its Performance Pathway, Oman Sail identifies the most talented young sailors, then provides top training from expert coaches to advance high performers to a level where they are ready to be selected for the Oman National Sailing Squad.

The Youth Programme supported by Omantel has been such a success it has drawn praise from the international sailing community, including from Sir Russell Coutts himself. The five-time winner of the Auld Mug, and now CEO of the America’s Cup Event Authority, spent time watching Omani youngsters race their Optimists in Muscat during the recent Louis Vuitton AC World Series Oman.

‘Oman Sail’s Youth Programme is a wonderful initiative for these young sailors and to bring back the rich nautical heritage that Oman has,’ Sir Russell told crowds at the race village.

‘More than 20,000 young sailors have been put through the programme and that’s a fantastic achievement. I had the chance to see these junior sailors racing and I’ve got to say I was very impressed. It’s my hope that we will see one of these young sailors go forward and win an Olympic gold medal and even one day be at the helm of an America’s Cup boat. I think that would be fantastic for sailing and fantastic for the area.’

As well as encouraging development in sailing Oman Sail has helped foster industry through the building of schools and marinas and set countless Omanis on new career paths. Oman Sail’s wide programme encourages training across a range of vocations from sport instructing to building boats and cutting sails, from skippering charter boats to event management and public relations.

Main picture: our admiration for the all-round excellence of the Farr née Mumm 30 is undimmed even 18 years on. An outstanding choice for the EFG Sailing Arabia – The Tour. Sir Russell Coutts in Oman (below) doing one of the things he really does do best 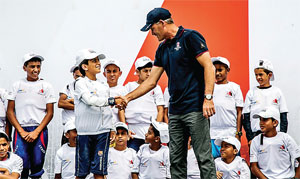 for the opening round of the 2016 Louis Vuitton America’s Cup World Series. With the world’s best sailors flying their AC45 foilers, it was Sir Ben Ainslie’s Land Rover BAR team that emerged triumphant after two days of intense racing.

Oman Sail also recently staged a sixth edition of EFG Sailing Arabia – The Tour, the flagship sailing event of the Gulf region, while March saw the return to Muscat of the Extreme Sailing Series with its new generation of foiling GC32 catamarans.

‘I love Oman – I’ve been here twice now and it’s a great country,’ Ainslie said following his World Series victory. ‘Conditions were great for racing. There is such fantastic support for sailing too and in particular youth sailing and getting youngsters out on the water.’ One of Oman Sail’s biggest proponents is French yachting star Sidney Gavignet, who has worked closely with the national initiative for the past five years to develop offshore talent. As the skipper of MOD 70 trimaran Musandam-Oman Sail, Gavignet has helped raise Oman Sail’s profile in key markets while providing vital offshore experience to his Omani crewmembers, along the way breaking a number of major speed records.

Gavignet recently returned to Oman to defend his title in EFG Sailing Arabia – The Tour, a 730nm race in Farr 30s around the Arabian Gulf. Such is the level of development of Oman Sail’s offshore talent that Gavignet found himself going toe to toe with Omani sailors Fahad Al Hasni and Sami Al Shukaili, his protégés and members of his MOD 70 crew.

‘The Tour really is becoming a classic event in itself, there’s nothing else like it in the world right now,’ says Gavignet.