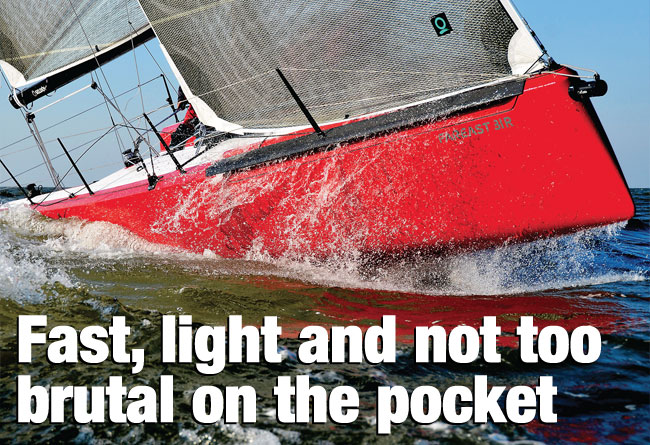 In 2009 we were introduced to Chinese manufacturer Fareast Boats, at that time one of the main suppliers of smaller dinghies such as the Optimist and 420. As Fareast Boats already enjoyed a 30 per cent worldwide market share in this sector – 1,500 boats were built and sold in 2015 alone – they decided the time was right to branch out into other areas.

The first project we did with them was the cruiser-racer Fareast 26. That boat introduced us to some interesting building techniques that the Chinese had long regarded as standard but which elsewhere might be considered as state of the art for the sector in which we are operating. After the 26 came the Fareast 18 and within three years more than 100 of each of these boats had been sold – mainly to China but with about 10 per cent going to Europe. However, these boats are both relatively conventional, so it was difficult for Fareast to make much of an impact in the wider international market.

Fareast 31R
By the end of 2012 Fareast were asking us to think about designing a more radical raceboat, approximately 30ft long but now built to a genuine no-expense-spared specification.

Over the past 20 years we have done a fair number of boats in the 25-40ft range, all performance but not necessarily rating oriented. However, here was the chance to design something completely unencumbered by any rating considerations at all. Even subconsciously it can be challenging as a designer to avoid slowing up a boat so as not to escalate the final rating; but with the Fareast 31R we consciously worked to buck the trend and optimise everything 100 per cent towards maximum speed.

Main picture: no two ways about it, the Fareast 31R is a beast of a boat, with carbon fin bulb keel, lots of sail, a very clean shape and these innovative aero-deflectors mounted on the foredeck sheer to help to optimise fore-and-aft airflow in the foot area.
Below: the 28R is a nice clean design with an asymmetric pit plus a simple cost-efficient J/Boat-style three-winch layout. Keel fin and rudder are in carbon like the 31R but the hull and deck lay-up is now E-glass/polyester. A lift keel and detachable rudder make for easy towing. But the real killer… a fast, modern 28ft dayracer that is yours for circa US$38,000 ex-factory. No wonder that Fareast Boats have sold nearly 180 boats in just 18 months 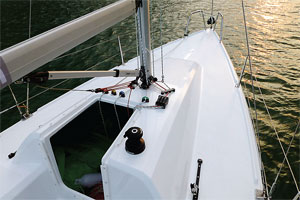 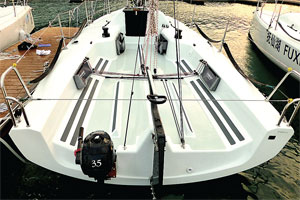 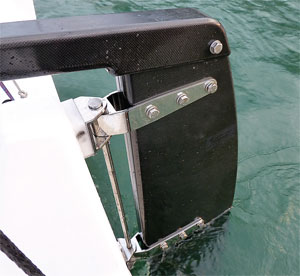 Stability and sail area were maximised, allied with a clean modern hull shape with low wetted surface and minimum drag; our philosophy is that for general inshore racing an all-round boat is still the best solution in terms of balancing upwind and downwind capability. One-track wonders always have their day, but sometimes that day can be a long time coming.

With the Fareast 31R we created a boat that hangs in with typical 40-45 footers upwind while leaving them for dust after the weather mark. This is achieved using a moderate beam/length ratio but with very high SA/DSPL and a 66 per cent ballast ratio. So lots of power balanced mainly with mechanical stability. To preserve sailing balance when pressed there is also little change in waterplane with heel, which means hydro drag stays relatively constant. Even in light air the run off the transom is clean, leaving very little wake.

The first Fareast 31R was shipped to the Netherlands and in late 2013 we began testing the boat in earnest. We soon discovered that it had an impressive turn of speed but that initially this did not always translate into the all-round performance we were seeking. However, after some hard work we unravelled the problem, an intense process of sail design optimisation producing a dramatic step-up in performance. A learning process.

So did the Fareast 31R have potential as a new international class? Sadly the answer is no, it did not. We had to be realistic; with Fareast we had come to the market with a flat-out carbon racer, no expense spared… and we were tapping into the wrong market. But what we had achieved was a new level of worldwide awareness, helped by the Ferrari red of our first boat plus the shiny clearcoat carbon aerofoils on the forward part of the hull designed to deflect airflow positively onto the jib.

On the water the Fareast 31R was hard to miss, but a price tag of €130,000 ex-sails and ex-factory proved similarly hard to digest.

Fareast 28R
Things move fast in China nowadays and in April 2014 the yard came to us with a request for a slightly smaller version of the Fareast 31R but built in conventional materials. This became the Fareast 28R, which really can be regarded as marking the company’s breakthrough into the mainstream keelboat market.

The Fareast 28R was introduced with a bang during the China Cup in October 2014 with its own class of 16 boats, on the back of a design-to-production cycle of just six months. As of March 2016, more than 175 units had been produced and sold, of which 30 per cent have gone outside China.

So how do we explain this success? Personally, I think the boating market is going through a big transition. As people spend less time practising one specific hobby, ease of maintenance, handling and low operating costs have become of paramount importance.

What we are now creating with Fareast is by no means new, but the package is attractive. Modern performance designs, without grand prix complexity and cost but still capable of grand prix speeds. And at a very much more accessible price point than many ‘more sophisticated’ rivals. So, you’re thinking… well, the answer is US$38,000 ex-factory.

Aimed primarily at inshore racing, the big open cockpit on the Fareast 28R features a TP52-style asymmetric companionway and pit for windward-leeward courses; much better for spinnaker retrieval than using the (leaky) front hatch we had on the Fareast 31R. There is also a lifting keel and transom-hung rudder to make handling ashore and towing much easier than with a similar sized fixed-keel design.

For the Fareast 28R the carbon hull and deck of the Fareast 31R are replaced by polyester resin/E-glass construction. Keel fin and rudder are, however, still built using a carbon/epoxy lay-up. All of Fareast’s keelboat hulls are built using vacuum infusion.

Lastly, the carbon rig of the Fareast 31R is traded for a simple double-spreader aluminium mast and boom from Selden.

For the appendages and other smaller composite items Fareast make good use of the resin transfer (RTM) technique they perfected with their Optimist production, using CNC-milled aluminium tooling. The foam core for the keel and rudder is similarly milled to exact size and then inserted into the dry laminate stack. After closing the mould the resin is injected and the completed structure post-cured in an oven. Using this process high-quality identical components are produced – essential to a modern one-design product.

The Fareast 28R was awarded ISAF one-design status on 1 January 2016.

Fareast 23R
Not a company to rest on its laurels, in 2015 Fareast Boats commissioned us for the design of a new Fareast 23R, aimed to further widen the appeal of the Fareast range of fast, light and affordable offerings.

The Fareast 31R is a very technical boat that needs to be sailed with six people, while the 28R is a simpler concept, designed to be raced by a crew of five with a more friendly deck layout and a pinhead mainsail in place of the 31’s big fathead main.

The Fareast 23R sits somewhere in between these two concepts, with the overriding requirement to fit within a 2.55m beam limit for road transport – something that has posed some problems with the Fareast 28R in Europe in particular.

On the water the most obvious difference between the Fareast 28R and 23R is the loss of the permanent backstay to allow the reintroduction of a square-top mainsail. While a backstay is important for sail trim, we were keener to create an affordable club racer that sailors would still identify with larger grand prix raceboats.

Where next?
The ambitions of Fareast do not stop at the R-range of yachts. The company’s next line of boats that we are already working on is a range of high-performance cruiser-racers. The focus for these boats will be on comfortable but fast cruising plus taking in the occasional weekend regatta.

Over the past 20 years there has been an unfortunate trend for cruiser-racers to put on weight to such an extent that sailing characteristics have really suffered (a trend partly mirrored in the automotive industry). Our objective is to buck the trend with a new line of comfortable boats that also sail really well. Surely that is something worth pursuing?