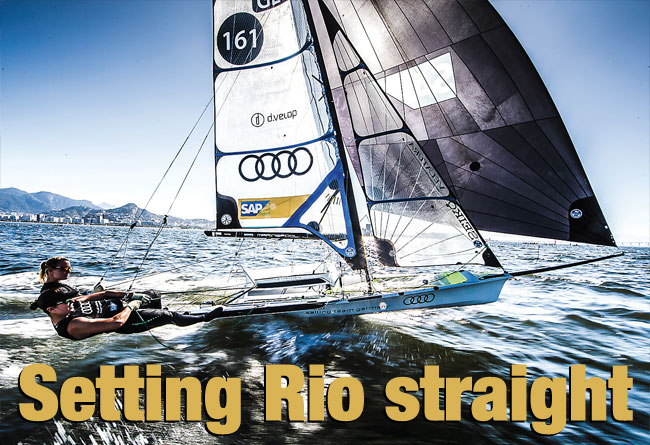 Work in progress and the clock’s ticking. SARAH GOSLING tours the beaches of Rio

The Olympic Games is the biggest sporting event on the planet. It’s an event unlike any other in that it’s unique, compelling and evokes raw emotions. Sydney 2000 was the last time an Olympic sailing regatta was held in the heart of a city, benefiting from stunning backdrops and sailing conditions that challenged each and every sailor. The Sydney Games were spectacular.

Sixteen years on and Rio de Janeiro, with Sugarloaf Mountain, Christ the Redeemer and Copacabana Beach, will provide a picture postcard background that is unrivalled. Some tricky wind and tide conditions will also be added into the picture come competition time, which should help make for compulsive viewing… with the perfect end result being that the world’s best all-round sailors take home Olympic gold.

Rio’s water quality has obviously been hotly discussed at World Sailing and on many occasions both the organisation and in turn myself have come in for criticism on the subject… we have also been regularly misquoted. I can take criticism, but not being attributed with comments that are entirely fabricated.

During the Aquece Rio International Sailing Regatta 2015, the Olympic Test Event, sailors had no interest in talking about water quality. They were there to compete, focused on the task at hand, and were only really happy to discuss sailing and the competition.

While they are not talking about it, it is part of my responsibility as chair of the World Sailing Athletes’ Commission to ensure that all that can be done to improve the water quality is being done. I would greatly like to see an improved situation for the Rio locals themselves, but my first responsibility is towards the sailors. The Rio city government made a clear promise in their host bid document that they would indeed take comprehensive steps to resolve water quality issues, but the truth is that any improvements that have been seen have been painfully slow in being delivered.

At World Sailing’s executive committee meeting last month I visited Marina da Gloria and Flamengo Beach, two venues that the Rio 2016 Regatta will utilise. The situation is far from perfect, but the progress made since my previous visit in 2013 is staggering.

The Rio Test Event, with the 49erFX (main picture) and Nacra 17, plus the 49er the average speed of the Olympic fleet is gently rising. Meanwhile, photographers at Rio 2016 are going to be looking for one backdrop only (below)… while local boy Robert Scheidt (who actually lives on Lake Garda) will have plenty of fans urging him on to an unprecedented sixth Olympic medal 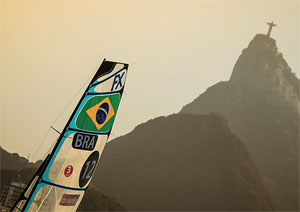 The anti-sewage ‘belt’ that is being built off the marina is due to be completed shortly, the dredging of Marina da Gloria has begun and when combined these two programmes are expected to deliver dramatic improvements in water quality within 10 days of completion.

There is little to be done around Flamengo Beach, which is a better situation – aside from installing good showers and more comprehensive hygiene facilities for the athletes. But if the locals are anything to go by, then there really seem to be few concerns at this venue – there were at least 100 people swimming there during my latest visit.

Floating objects and rubbish on the field of play, the racing areas, is a big concern to me as this could influence finishing positions. This issue will be strictly managed during the Olympic Regatta by international technical official Pedro Rodrigues; he will act as the link between the Rio 2016 sustainability manager, the State Environment Agency and the World Sailing race management team to ensure that the racing areas remain as free of debris as is possible.

I will continue to work hard to ensure that World Sailing and the IOC are together doing all that they can with the Rio 2016 organisers between now and the end of the Games so that 2016’s big event is remembered for all of the right reasons.

Athletes at the core
At the heart of the Olympic movement are the athletes, and their opinions on the big subjects are the only opinions that really count. This fact was reiterated by International Olympic Committee President Thomas Bach when he introduced Agenda 2020 in 2014.

Rio 2016 gives us the opportunity to vote new members onto the IOC Athletes’ Commission and there are some great sailors who have put their names in the ring. It will then be up to the sailors competing in Rio to use their votes to confirm the next sailing representative on the IOC commission. It’s then down to that person, with the appropriate support, to work hard to protect sailing’s position within the Olympic movement.

The period of Rio 2016 is also the time that sailors will vote their peers onto World Sailing’s own Athletes’ Commission. I have been on the commission since 2012 and we are a mixture of current and recently retired Olympians. We will have five places up for election this year and it is hugely important that the sailors continue to play their part in the decision making.