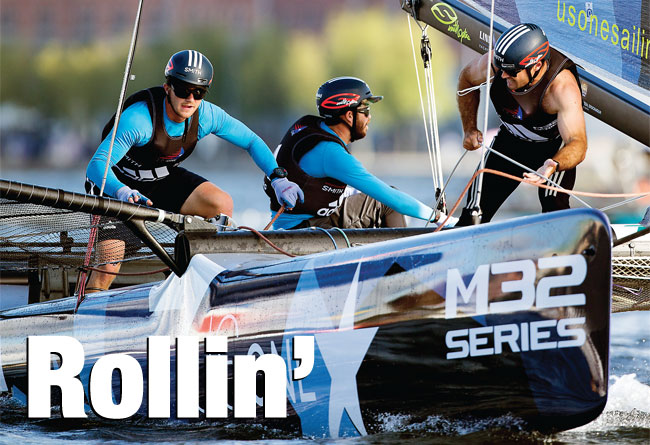 Russell Coutts’ decision to take the America’s Cup away from its roots in traditional monohull keelboats and into high-speed multihulls has had a dramatic trickledown effect on the rest of the sailing world. Lifelong monohull sailors have started to sit up and take notice, and some are beginning to wonder what life is like in a faster lane.

The M32 catamaran was designed to satisfy this growing curiosity with cats, and to offer a practical, affordable route into the world of high-speed multihull sailing. The ‘M’ in the name refers to Marström, Göran Marström, whose beautiful Tornado catamarans became the only weapon of choice for aspiring medal winners in the former Olympic multihull class. The Swedish builder has been responsible for some of the finest small hi-tech multihulls of modern times, as well as the not-so-small SeaCart 30 tri and the Extreme 40 cat, which until this year was the mainstay of the Extreme Sailing Series.

But Marström wanted a boat that he could blast around on with his friends at home on the west coast of Sweden. It had to be easy to rig, easy to maintain, not too hard to sail, yet still delivering blistering performance. Working with longterm design partner Kåre Ljung, the duo settled on 32ft (9.75m) as a good length for accommodating four large or five small adults, yet still manageable on the shore without the need for a crane.

‘The M32 was designed to be strong, to be able to do coastal racing,’ says Ljung. ‘It had to be reliable. You don’t want the boat to break when you’re out at sea. The M32 was Göran’s dream boat. He designed it for himself, the ultimate boat for his own use.

‘Göran and I had the knowledge from designing and building the Extreme 40s. We tried to address what was missing on the Extreme 40s, and also we were not constricted by the demands of stadium sailing. The Extreme 40s were good boats, but too hard to handle and too expensive. We wanted something easier to handle, but that was just as fast – yet much cheaper to operate.’ 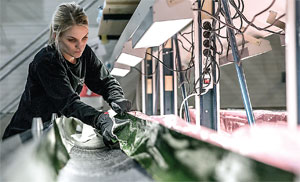 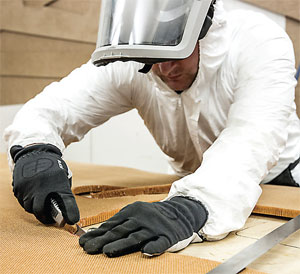 Main picture: the M32 got going in anger last year but the whole project takes a giant leap ahead in 2016 as the class of choice for the World Match Racing Tour. The use of a rig that combines main and gennaker, but no jib, should boost manoeuvrability and ease the match racers’ path from heavy monohulls to fast-accelerating cats. Above: lots of skilled people, excellent resources and this large autoclave (below) will keep the M32s rolling out the factory 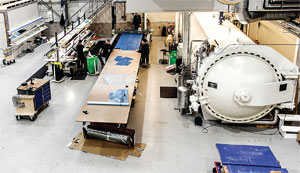 All-carbon construction for the hulls, beams and rig makes for an all-up weight of just 510kg, less than half the Extreme 40 weight. Coupled with a powerful 8.35m beam (including hiking racks that extend from the hulls), this means an immense power-to-weight ratio.

The C-shaped foils provide about 50% lift, reducing wetted drag significantly. This enables the M32 to accelerate very quickly, to about 14kt upwind in moderate airs and sometimes in excess of 30kt downwind.

To some the lack of a jib can look strange, but Ljung says that an upwind headsail will only slow the boat down. ‘Do you see a land yacht or an ice yacht with a jib? Do you see an A-Class cat with a jib, even though their class rules permit one?

‘No, and there’s a reason for that. When the M32 is sailing faster than windspeed, which is much of the time, the apparent angle becomes so small that a jib would just slow you down, plus it requires extra structure and fittings which all make the boat heavier and more expensive.’

But what about the added manoeuvrability of a jib, for faster tacking and easier bearing away in downspeed manoeuvres, particularly important for match racing on the World Match Racing Tour?

‘Where is the jib… That was the first question I asked myself when I first sailed a M32,’ says ex-professional sailor Martin Krite, who now oversees production at the M32 facility on the island of Hönö near Gothenburg.

Krite has a glowing CV from the America’s Cup and the Volvo Ocean Race, which he won as part of Franck Cammas’s Groupama crew on the 2011-12 circumnavigation. But he had never raced multihulls before. ‘I put my question to Kåre and he said the boat was too fast for a jib. I still wasn’t fully convinced, so I made a jib for the M32 and went sailing with it in Gothenburg.

‘Speed-wise we didn’t see any difference, it wasn’t any faster. And in terms of manoeuvres, it’s 100% better to unfurl the first 1.5m of the gennaker. It’s much further forward than the jib would be, so its turning force is greater. Through a tack, you unfurl it, back the gennaker, then furl it again when you are on the new tack.’

Lars Linger, who has been running three-day licensing courses in Lanzarote, helping sailors get up to speed with how to rig, handle and race the M32 safely and effectively, says that most of the time you can tack the boat easily without unfurling the gennaker at all. ‘It’s in waves and strong wind that a brief moment of unfurling helps, just to stop the boat stalling and getting you through the eye of the wind faster,’ he says.

With 20 teams set to be on the startline for the first World Match Racing Tour event of 2016 in Fremantle, Australia, it’s important that everyone is comfortable with handling the M32 at close quarters, explains Linger. ‘It goes without saying that everyone on the Tour is going to be a good sailor, but some of them won’t have done much multihull sailing.

‘They are about to enter a match racing environment where they are travelling at about five times the speed of what they have been used to in a typical keelboat.

‘The less experienced multihull sailors might be operating at 20 per cent, but by the end of an intensive three days with us we’ll have them up to 80 per cent. To find the last 20 per cent of performance, learning the details and subtleties, that’s the bit that will take the most time and practice. But at least they will have a good understanding of the basics by the end of the three-day clinic.’

So far the mainsails have been constructed of North Sails 3DL, although the class is now switching to 3Di for greater longevity. The sails also carry two reef points, with the no1 reef reducing area by about 25% and the no2 reef cutting area to around just 50% of maximum. So far the highest speeds have been achieved on the no1 reef, but such is the light weight and efficiency of the M32 we could yet see the fastest speeds achieved with two reefs.

Meanwhile, production is full steam ahead in Hönö, with plans to accelerate output further, says Krite. ‘We are now aiming to build at least two boats per week, so we need to look at how we can speed up the production. It’s important to have Kåre and Göran overseeing how we build the boat to ensure that all the boats come out exactly the same.’

It also helps that Killian Bushe, best known for building the winning hulls in successive editions of the Volvo Ocean Race, heads up the build team. Each hull comes out close to 127kg, with all the hulls within just 1 to 2kg of each other. It’s as one-design as one-design gets.

Ljung is also confident that every M32 will remain competitive for many, many years. ‘It’s one of the benefits of using composite materials and the autoclave process in construction. When we were building Tornado catamarans there were sailors winning Olympic medals in boats that were 10 years old or more. There was no drop-off in performance. The same will be true with the M32.’