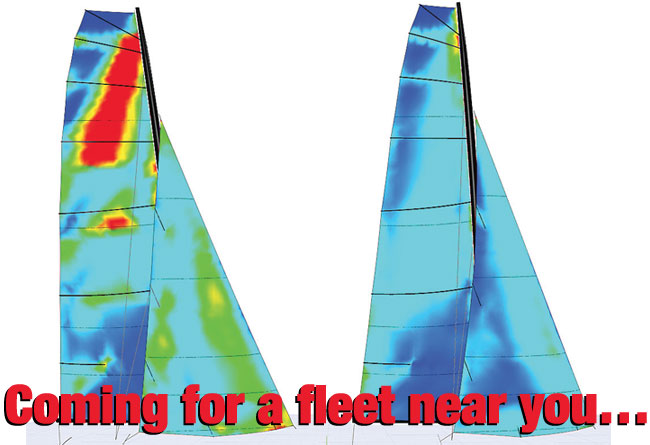 Incidence Sails has been a leading name in long-distance offshore racing sails for decades, often leading many of the world’s other sailmakers in this tough genre due to their experience and success in the classes that compete in trans-oceanic events, such as the Imoca 60s, Mini 6.50s and Class40s, and of course some of the most famous giant multihulls that ever howled their way into the oceanic record books. The combination of intense racing in often gruelling offshore conditions has steered Incidence in identifying the crucial balance between innovation and durability that has allowed so many of their customers to stand on the podium at some of the world’s toughest ocean racing events.

And while Incidence has been making steady progress in its evolution of sail cloth and design, to steadily produce impressive results over the years, the development of their latest product, DFi, has just been recognised as another significant leap forward.

The High Technology Prize given by the Nautical Industries’ Federation (FIN) is a prestigious recognition in the field of offshore racing innovation; it is judged by a distinguished panel, composed of specialist journalists, representatives of Eurolarge Innovation, the Nautical Certification Institute (ICNN) and FIN itself. It was Incidence’s DFi product that took the award for 2015.

‘We would like to thank the FIN and the jury of the High Technology prize. We are very proud of this award,’ said Yannick Richomme, development director at Incidence. ‘DFi is Incidence’s current filament solution, which emerged from the development of D4 membrane. It is characterised by its lightness, its strength and its shape-holding properties.

‘We launched DFi at the Paris Boat Show after a rigorous validation programme: technical, legal and also to ensure that we can consistently produce to the standard required and at the price wanted. The final process, a full-scale sailing test, took place during last November’s Transat Jacques Vabre, where three boats were equipped with DFi sails. This test proved convincing because of the tough weather conditions encountered on the way to a podium finish in the Imoca class.’

The process that led to this award-winning product started two years ago with the formation of Incidence’s own integrated design department to analyse, test and produce what became DFi.

‘We started with D4,’ said Pierre-Antoine Morvan, R&D engineer at Incidence and an experienced match-racer.

‘We then had to change software and build our own materials laboratory in which we are developing new material-testing techniques and customised production machinery. The result is a material of unprecedented durability and shape-holding properties.

Main picture: digital simulations of sail deformation. A current Imoca 60 with D4 sails (left) and (right) with a similar sailplan but using DFi. Red and yellow represent greater deformation, green and blue represent less deformation.
Below: the Wally 77 Genie of the Lamp trials her DFi wardrobe 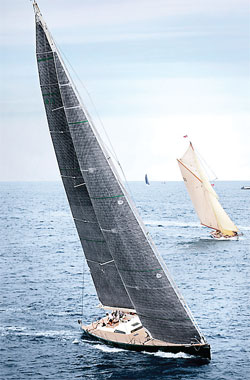 ‘Being free of any Mylar film or taffeta, this material is also extremely light. Variations of DFi are currently also being developed for gennakers on some of the biggest cruising boats.’

To achieve these characteristics in DFi, Incidence controls all aspects of the fabrication, design and assembly process. The membrane material is composed of pre-impregnated composite tapes laid out along precise but non-parallel lines in order to resolve the primary and secondary loads exerted on a sail. The orientation of the tapes is controlled by in-house sail engineering software called SailPack developed by BSG Developements and K-Epsilon to achieve the most efficient distribution of material possible.

The pre-impregnated tapes are laid and laminated on a highly polished marble table. Here they are vacuum bagged, heated and compressed using a minimum six bars of pressure, then bonded with a recyclable, solvent-free thermoplastic resin. As with Incidence’s D4 Premium fabric, the membrane is manufactured in a single operation. It is then shaped on the floors of the Incidence sail lofts. Of course, the real proof of a new material is in real-world application – where the reviews have been convincing…

Michel Desjoyeaux, co-skipper on the Imoca 60 SMA, equipped with a DFi J2 since the start of 2015: ‘Our DFi J2 has impressive shape-holding properties, particularly in big waves. That’s a measurable performance advantage.’ Michel’s co-skipper Paul Meilhat agrees: ‘I chose to work with Incidence after my good experience racing Figaro one-designs. DFi precisely matches our requirements: good shape holding, reliability and great accuracy in working to our weight parameters.’

And it’s not just those crazy oceanic racers… Manager of Wally 77 Genie of the Lamp, Nicolas Marchand says: ‘To celebrate our 20th anniversary, Genie of the Lamp treated itself to a new DFi sail wardrobe. The result lived up to all our expectations. Our successful collaboration is based upon a positive five-year partnership working closely alongside each other.’

So, with a new award-winning material in DFi, a new management and R&D team, and a market ripe for improvements in superyacht and offshore sail inventories, the team at Incidence, once best known among French offshore racers, today stand poised and hungry for even greater success at the highest international level.