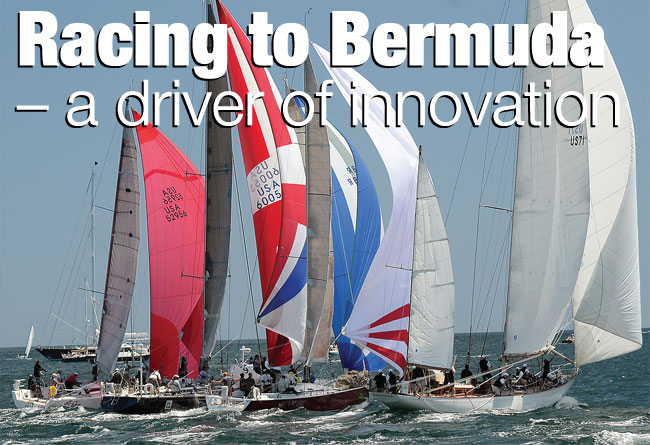 Few tests of blue water seamanship are as iconic as the 635nm Newport Bermuda Race. The next start, on 17 June 2016, will be the race’s 50th and will also mark the 90th anniversary of the partnership of the organisers, the Cruising Club of America and Royal Bermuda Yacht Club.

Sailed almost entirely out of sight of land, the Bermuda Race was created in 1906 by Thomas Fleming Day, an American yachting writer who believed in the then radical idea that amateur sailors in small yachts could sail safely in blue water. After English yachting writer Weston Martyr sailed in the seventh Bermuda Race in 1924, his and others’ enthusiasm for ocean racing prompted the founding of both the Fastnet Race and the Royal Ocean Racing Club. Fast forward 48 years and in 1972 the RORC entry Noryema won one of the roughest Bermuda Races ever.

George Sakellaris’s Maxi 72 Shockwave makes a dawn approach to the finish off Bermuda’s St David’s Lighthouse in the 2014 race. After 635nm of sailing she took line honours by 7 minutes over the Maxi 72 Bella Mente. In 2012 they had finished 2 minutes apart

The 100th Anniversary race in 2006 had the largest fleet in the event’s history, 265 boats. Today international fleets of more than 160 boats compete in the biennial race as the key component of the Onion Patch Series, a parallel inter-club and international team race event

In a typical race a chilly first night brings the fleet out into the Atlantic. Then, as the sailors enter the realm of their new lord and master, the Gulf Stream, the race often makes good on its nickname, ‘The Thrash to the Onion Patch’. Once across the rough Stream, the sailors press on to the finish off St David’s Lighthouse. Inhaling the sweet smell of oleander, they motor up the winding channel to Hamilton, where the Dark ’n Stormies flow until the prize ceremony on Government House’s spectacular hilltop. Prize or not, any crew can glory in the satisfaction of having raced to Bermuda.

The fleet
The 2016 Newport Bermuda Race will have seven divisions, each with its divisional and class prizes. The race has no single winner. Except for the Superyachts, each division is rated under the Offshore Racing Rule (ORR)


The rating rule
The Bermuda Race is dedicated to the principles of safe sailing and fair racing. ‘The Newport Bermuda Race is not a race for novices’ says the Notice of Race. All boats are inspected, all crew lists are reviewed, and a portion of each crew is required to attend a safety at sea seminar.

The Cruising Club of America has asserted strong leadership in rating rules for nearly 90 years. From the 1930s to 1970 the Bermuda Race fleet was handicapped using the CCA Rating Rule. The CCA then supported a body of research at the Massachusetts Institute of Technology that led to a new Velocity Prediction Program (VPP) – using the entire boat and not just a few measurements to more accurately predict velocity on all points of sail across a range of conditions.

Newport Bermuda has used VPPs since 1978. Today’s system is the Offshore Racing Rule. The race prefers the ORR because it does the best job in fairly handicapping different boats in a diverse fleet without unduly favouring one type of boat in any one condition. ORR does not favour old designs, new designs, classics or hightech downwind flyers.

ORR encourages a well-prepared boat with a capable crew. ORR says to boat owners, ‘Get the boat in good shape, set good sails, muster up your best crew, and come racing. If you sail fast, make the right decisions and don’t make too many mistakes, you have a shot at collecting some silverware.’ Other organisers across the US and around the world appear to concur with the Bermuda Race organiser’s choice and also use the ORR system.
John Rousmaniere
A.J. Evans 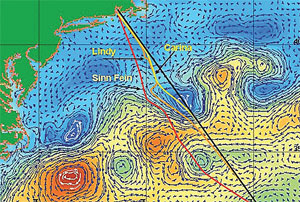 Developing a winning Bermuda Race strategy that accommodates the variabilities in weather, ocean current and sea state requires skippers and navigators to consider a number of factors. Among them are Gulf Stream conditions. The point at which the Stream is encountered is often considered a juncture as important as the start or finish of the race itself. The location, structure and variability of this major ocean current and its effects all present a particular challenge for every navigator and tactician.

The Gulf Stream follows a reasonably well-defined northerly track along the outer limits of the US continental shelf. Beyond Cape Hatteras currents turn to the northeast, and flow trajectories in this area (which covers the rhumbline to Bermuda) become increasingly non-linear and wavelike, with characteristics similar to those observed in clouds of smoke trailing downwind from a chimney. On occasion these meanders will become so large that they will ‘pinch off’, forming independent rotating rings or eddies in the areas to the north and south of the main body of the Stream.

All of these features may significantly affect set and drift. Efforts to locate the Stream and map its location and structure typically begin months before the race with the collection of satellite sea surface temperature (SST) images available at a number of websites. In the past the most competitive teams have also chartered aircraft to double-check the precise juncture of the Stream for themselves shortly before the race start.

The Gulf Stream also exerts significant influence on weather and sea state. This favours cloud formation and intensification of advancing pressure systems over a large portion of the North Atlantic. Intensification is particularly pronounced in fast-moving cold fronts. When these fronts encounter the warm waters of the Stream, the rate at which moisture-laden warm air moves aloft accelerates, favouring formation of intense thunderstorms replete with wind, rain and sometimes hail.

These features illustrate the care required when developing a race strategy, and the need to consider much more than simple analytical data describing Gulf Stream or wind and wave conditions. The boat’s type, condition and crew also matter. The successful integration of all of these factors is the challenge that represents the particular attraction of the Newport Bermuda Race.

Click here for more information on the Newport Bermuda Race »