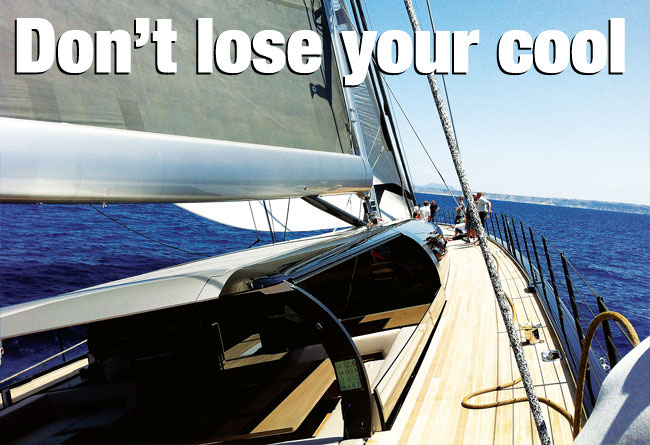 Marlow take the heat out of superyacht running rigging

Ropes manufactured using UHMPE, such as Dyneema, have been widely accepted in grand prix yacht racing and sailing superyachts for many years now. The strength, weight and elongation benefits of Dyneema are widely known and understood; however, as loads increase through larger and more powerful boats, the demands on the ropes grow ever higher. Nowhere is this more keenly seen than with superyacht running rigging.

Counteracting forces and frequent cyclic bending from superyacht captive winches can have serious implication for the lines used. Cover slip, resulting in excess and baggy covers, damages ropes as well as hampering the smooth running of the winches; plus the heat that is generated through internal and external forces can have serious implications for rope integrity. In addition, the very high loads demanded by the enormous pulling power now available and the necessarily high factors of safety can often be at odds with rope diameter limitations dictated by the drums and deck gear.

Our engineering teams developed Oceanus specifically to tackle these challenges. Oceanus uses Dyneema SK99 within a special low-stretch core construction to maximise strength for diameter without compromising flexibility. The cores are specially coated to improve core/cover interaction and eliminate coverslip, while a Dyneema and Technora blended cover provides the ideal compromise of grip and abrasion resistance to ensure smooth and efficient running on and off the winches and through line pre-feeders. Finally, a machine-finished factory splice improves connection strength as well as aesthetics while helping to minimise the diameter increase at the neck and along the tail. 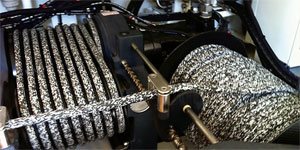 Main picture: the 66m sloop Ahimsa (formerly Aglaia) was one of the first very large yachts to be rigged using Marlow’s innovative new Oceanus cordage system, seen here in more detail (above) on one of the boat’s many powerful captive winches. The graph (below) visually demonstrates the way that the colour exhibited by a line treated with Marlow Thermacoat varies depending upon the temperature to which that line has been exposed

The result is a diameter-specific, high-strength, abrasion and heat-resistant rope designed specifically to work seamlessly with modern captive winches. The Oceanus captive winch rope range starts at 24mm and goes up to 80mm diameter – and an average break load of 464 tonnes when specified with Dyneema SK99…

However, that isn’t the whole story. The ability to protect a Dyneema load-bearing core with blended heat-resistant covers is well documented – a path forged by Marlow’s Grand Prix Series. However, the effect of internal heat generation within a running rigging system remains less well documented, but no less fundamental to a rope’s performance and longevity. Internal heat build-up in a rope can be caused through a number of factors, such as elongation, yarn on yarn friction and cyclic bending. Add these factors to the high loads and hot captive winch rooms on modern superyachts and you can be faced with an ideal recipe for premature rope failure.

Naturally, Oceanus provides options to address these factors. Key among these is the use of Marlow’s own proprietary SiliconCoat, which can be applied to SK99 yarn during manufacture to reduce internal heat build-up within the load-bearing Dyneema core. DSM Dyneema’s ICO-DYN 10 performs a similar function and in addition DSM also produce XBO versions of their SK75 and SK78 yarns which also help to limit damaging internal heat generation.

While the coatings detailed above are able to reduce heat buildup and limit its effects on the fibre, heat generation will still occur, with the potential to cause permanent and irrevocable damage if it is ignored or poorly managed.

Prolonged exposure to temperatures over 80°C (176°F) will alter the crystalline structure of UHMPE fibre at a molecular level, permanently reducing the strength of the rope and crucially without any visible indication of damage. Elevated temperatures can also significantly increase the rate of creep experienced by the rope.

With this in mind, and in an attempt to offer riggers, project managers and captains the tools required to monitor and manage the invisible damage caused through heat generation, Marlow’s technical team developed ThermoCoat.

Marlow’s ThermoCoat System provides an easy but accurate means of inspection for the real-time assessment of deterioration; it is now incorporated into the core of all the lines in the Oceanus range. This patent pending technology provides a visible indicator that not only signals when a rope has been exposed to excessive heat, but also provides a simple scale to indicate the degree of exposure that has occurred.

Retired superyacht ropes are often returned to the factory for inspection and residual testing. Now a simple visual inspection can identify potentially harmful heat exposure and the intensity of that exposure, at which point further investigation can take place to determine how to proceed. Factors such as time of exposure, percentage of safe working load seen, working conditions and condition of rope can be used to determine how the heat build-up may have occurred within the system, whether or not the retirement schedule is valid, or indeed whether procedural or system change is needed.

This new generation of ‘smart ropes’ is intended to allow the operators of high-powered sailing superyachts to better understand and react to the potential damaging effect of heat on large ropes, which will in turn help to deliver increased safety and reliability.