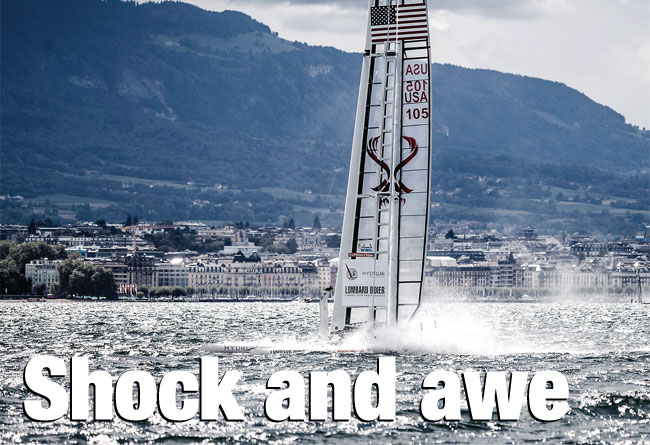 In 2013 in Falmouth the Groupama Sailing Team opened a can of fancy Dijon Whoop-ass on the C-Class. In 2015 the beating

The sports reporting is that easy. It is an oft-stated truism that the team that works harder should win. In this case that is exactly what happened. It wasn’t in doubt for more than a few moments. On Lake Geneva last summer there was not a single area where Groupama was not superior to all other teams.

Second-place finisher Axon Racing was sailing the 1995 MacLane-designed Cogito which will be referred to as SUI-104 in this article. SUI-104 has been updated and is probably faster than she was in 2007 when she lost to the Canadians, but she should not have been the second-fastest C-Class on Lake Geneva.

This is not to take anything away from Axon’s Benoît Marie and Benoît Morelle, but rather to state that Groupama were far more motivated than the other teams and that no one among the other teams had made a concerted effort to match the French effort. There should have been most of a fleet in between Groupama C and SUI-104 no matter how well she was sailed. It is worth noting too that this event was two years after Falmouth instead of the usual three years between C-Class Little Cups. This reduced what teams could do to compete with Groupama and certainly affected the outcome.