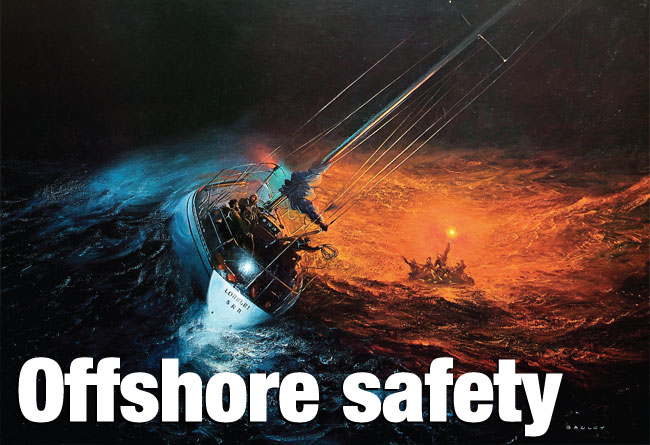 To quote Alan Green: ‘The first international Special Regulations in 1968-70 were an amalgam of those applied by the clubs (including the RORC and the Cruising Club of America) that had run offshore races since the early part of the 20th century. The early regulations were very basic compared with those of today. Liferafts were unknown and a typical requirement was for a yacht’s tender or dinghy “capable of laying out a kedge anchor”. For buoyancy a dinghy could have empty petrol tins lashed under the thwarts.’

The purpose of the Offshore Special Regulations (OSR) is to establish uniform minimum equipment, accommodation and training standards for safety at sea for small to large sailing boats that are transferable between countries.

The Offshore Special Regulations were administered by the Offshore Racing Council (ORC) until 2002 when the administration of the OSR was transferred to the International Sailing Federation (ISAF). The OSR are developed and maintained by an international group of interested sailors selected by their ISAF Member National Authority. The Special Regulations sub-committee meets once a year at the ISAF annual conference under the chairmanship of Will Apold (Canada). Final approval of the sub-committee’s recommendations is then considered by the ISAF Oceanic and Offshore Committee chaired by Stan Honey (USA).

The overall safety programme consists of the Offshore Special Regulations, a training manual for personal safety at sea, and a series of training sessions at locations around the world.

The regulations are currently being redrafted to make them more user-friendly with web-based tools. Over the years the regulations have become mandatory requirements interspersed with recommendations and advice, which not only makes for a larger document but often leads to misunderstandings.

In addition to separating the regulations from the recommendations and guidance, future presentation of the OSR on the website will be enhanced. The website will enable a skipper to answer a few questions about the boat of interest such as overall length, whether it is a monohull or multihull, fixed or canting keel and boat age and category of event, after which a specific, tailored report of relevant requirements will be generated for downloading.

The OSR aim of improving safety at sea developed into programmes to have new yacht designs reviewed by independent certifying agencies (Design Plan Review). Following the 1979 Fastnet, ORC commissioned the American Bureau of Shipping (ABS) to publish the Guide to the Design and Build of Offshore Yachts. At the same time a system of plan approval was also established with plans approved by ABS.

Following the withdrawal of ABS from the scheme, this was replaced in January 2010 by a requirement for Category 2 races (like the Fastnet) for yachts to have been designed, built and maintained in accordance with the requirements of ISO 12215 Category A (International Standards Organisation, Small Craft – Hull Construction and Scantlings) or classification society rules, depending on size. Yachts shall carry onboard a certificate of building plan review from a notified body recognised by ISAF. Since this scheme began in 2010, 110 Plan Review certificates have been issued including 36 Production Series Plan Review certificates.

The main bodies conducting the plan reviews are DNV-GL (the merged Det Norske Veritas (Norway) and Germanischer Lloyd (Germany), Institut Certification et Normalisation pour Nautisme (ICNN), HPi Verification Services (HPI) and the International Marine Certificate Institute (IMCI). The failure of two Class 40 keels in last November’s Route du Rhum was the first such incident involving boats certified under the scheme. An investigation by Jean Sans into the reasons for the failure of these two non-standard fins – fabricated from sheet steel and connected by 6mm bolts – will be considered at the next meeting.

The special regulations review investigates loss of life at sea in sailing vessels, to see if our regulations were being used, if they were effective and if the regulations need improving.

Crew training was recognised as a vital aid to survival and adopted into the ORC/ISAF Special Regulations around 2001 with the concept of ISAF National Authority approved training courses, with the aim of providing an internationally accepted Model Training Course in Offshore Personal Survival.

In 2012 the first edition of the ISAF Guide to Offshore Personal Safety was published, written by ISAF in collaboration with Simon Jinks, who among other roles was in charge of the safety training courses for the 2014-15 Volvo Ocean Race. So far this 170-page book has also been translated into French and Chinese.

Returning to the introduction, for the avoidance of doubt, the use of empty petrol tins is no longer advocated in the OSR as a method for providing buoyancy to a liferaft.
Stan Honey, Will Apold, Simon Forbes