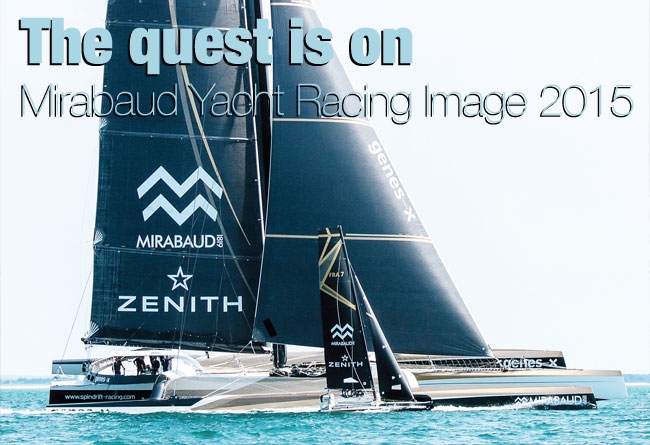 The 2015 edition of the Mirabaud Yacht Racing Image Award has begun! Submissions are open and yacht racing photographers from all around the world are invited to select and send in their photos up until 25 October.

The Mirabaud Yacht Racing Image is now the world’s premier photography competition dedicated to the sport of sailing, celebrating the very best yacht racing image taken over the previous 12 months. Since its debut in 2010 this prestigious Trophy has been awarded to four world-class photographers: Thierry Martinez, France (2010 and 2011), Kurt Arrigo, Malta (2012), Abner Kingman, USA (2013) and Alfred Farré, Spain (2014).

A new standard was set with the amazing 2014 competition. Indeed, the last edition of the event revealed a stunning collection of images submitted by 108 professional photographers spanning 25 countries. More than one million people saw their pictures across various social networks, while the event’s dedicated website received more than 150,000 unique visitors.

‘I have been involved in this contest since day one as both a partner and member of the jury,’ says Antonio Palma, CEO of Mirabaud & Cie SA. ‘In my opinion the last edition of the contest in 2014 was the best. I was truly amazed by the quality of the pictures we received and the whole process was simply a great pleasure – it was also a real challenge to try to select the images that best represented the essence and excitement of the sport.’

In 2015 the top 20 pictures selected by the public will once again be displayed during the Yacht Racing Forum, on 7-8 December, in Geneva, Switzerland, where the winning photographers will each be called on stage to collect their prizes and share their experience with the Forum delegates. The overall winner will receive the Mirabaud Yacht Racing Image Award and a precious Zenith El Primero Chronomaster 1969, while the Public Award trophy will also be presented along with additional prizes from event partner Nespresso.

The Mirabaud Yacht Racing Image award is organised by MaxComm Communication and is open to professional yacht racing photographers from all over the world. Its purpose is to pay tribute to their work, to provide them with a promotional platform and to help promote the sport of sailing to a wider audience.

A member of the jury in 2015, America’s Cup and Volvo Ocean Race skipper Ken Read paid tribute to the quality of the photographs and the importance of yachting photographers to the development of the sport: ‘One of sailing’s enduring qualities is the fact that a single photograph can tell more about our sport than a book of words. Power, grace, modern and old-fashioned beauty, athleticism, variety. The beauty certainly lies in the eye of the beholder.’

International financial services group Mirabaud is the title sponsor of the Mirabaud Yacht Racing Image award. Mirabaud’s association with sailing is built on its alignment with local and global initiatives that convey professionalism, ethics and performance. The company has been involved in international yacht racing for many years, notably through its sponsorship of the Bol d’Or Mirabaud, the world’s biggest regatta held on a lake, its support of offshore sailor Dominique Wavre (Vendée Globe 2012-13 and Barcelona World Race 2010-11), and its current ongoing partnership with Yann Guichard and Dona Bertarelli’s Spindrift Racing as Gold Partner.

Top: definitely the team to join… not only are Mirabaud backed Spindrift Racing about to set off on a Jules Verne Trophy attempt with the mighty VPLP-design Spindrift 2, but the team’s inshore prowess was amply demonstrated with a win in the 2015 Tour Voiles on their Diam 24 – seen here flirting with the idea of a quick luff… Meanwhile, the Mirabaud Yacht Racing Image award will be a highlight (below) of the 2015 Yacht Racing Forum in Geneva 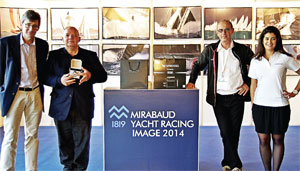 It was a victory that didn’t surprise the Swiss Diam 24’s coskipper Revil: ‘We were racing consistently at the top of the fleet, with only a couple of weaker performances during the entire Tour.

‘Groupama did the same but the other way around; they started very well but had two bad races at the end. Altogether, our results are fairly comparable… just a little bit better for us!’

There were some concerns ahead of the event about the inshore programme, the format and even the new trimaran platforms chosen for the 2015 Tour. ‘But this was a great event,’ summarised Revil.

‘The blend of stadium events and coastal courses was perfect, and the boats were ideal for the job. What we observed is that virtually every team could perform well in light air, but the same five or six teams usually led once the wind increased. For us the lighter races proved to be the most challenging.’

It was a long and tiring month for all of the teams, and Spindrift’s co-skipper is sure endurance, health and fitness management were key ingredients of the team’s success. ‘It was also efficient for me to be able to share helming duties with François [Morvan]. This type of event is draining and it is essential – but far from easy – to find a way to maintain maximum performance all the way through.’

Spindrift’s management hasn’t announced yet if the Tour de France à la Voile will be part of the team’s programme in 2016. ‘Our current priority is the Jules Verne Trophy. The Tour de France helped us to get closer to each other within our squad, which is also of course positive for the future: three out of the five team members involved in the TdF will sail onboard the maxi trimaran this winter and we’ve now learnt how to both live and sail together over a long period,’ says Yann Guichard, skipper of Spindrift 2.

Jules Verne Trophy
The maxi trimaran Spindrift 2 and its crew go on standby on 19 October, ready to set off around the world the moment the weather allows. ‘The standby period is not easy to handle,’ explains Yann Guichard, ‘as other oceanic record attempts have also discovered.

‘Team members need to be prepared to go at any time. They have to be ready both mentally and physically during a period that can really drag out. To keep the team’s spirits up we currently all meet up at least once a week and compete together but in different sports – soccer, running, tennis and so on.’

Spindrift 2 herself has been updated for the round-the-world trip, with a new mast that is 3m shorter than the original but with the use of new techniques and materials is at least 500kg lighter. There are also new sails, plus a new daggerboard and revised deck layout. ‘We have worked very hard at saving weight; the boat is now approximately 1.5 tonnes lighter overall than it was during its previous Jules Verne-winning round-the-world voyage.

‘Our objective is to set sail as soon as the right weather window appears. And if there is a long delay we are prepared to remain on standby until at least early February, after which weather conditions in the Southern Hemisphere deteriorate too rapidly.’
Bernard Schopfer