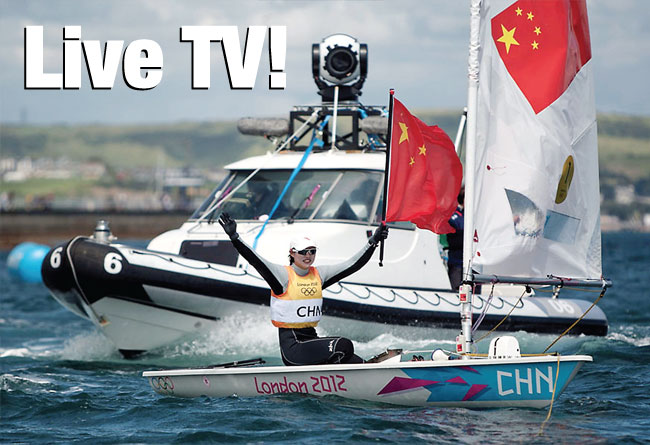 As the fleet of Olympic-class raceboats approaches the starting line every competitor is working hard to accelerate to full speed, at the favoured end of the line and with clear wind. Anticipation is running high. The seconds count down. A clean start can make the difference between a good race and a disappointing finish. There is a lot at stake.

At this very moment several gyro-stabilised TV cameras are being directed by a team of production experts in a truck onshore. The director wants the high camera right on the line at the gun. From the water another camera needs to capture the speed of the boats, and the determination on the faces of the competitors. Viewers want to see every vantage point to understand which teams are gaining an edge.

Unlike most sports, which use cameras plugged into the wall or on rails or cables, sailing takes place out on the water. Signals must be transmitted via radio frequencies. The waves and wind make it difficult to get a steady picture, but with the use of the latest stabilised camera systems the images are remarkably good. The top camera operators have also fine-tuned their craft over many years – though the camera systems deployed to keep the boats in focus and the picture steady remain very expensive.

Helping make sense of the action is a commentating team that interprets what we are seeing. The general routine is to explain what is going on, give a brief technical comment, and then add an emotional element to the narrative. An experienced commentary crew will not talk about the obvious picture on screen, but instead find something unique to talk about. Sailing is a difficult sport for many non-sailors to understand. Compelling graphics and the use of GPS technology give the viewer an overhead view of which boats are leading, gaining distance on the fleet or losing ground.

All these images must be shot without disturbing the wind or water for the boats that are racing. The producer, director and commentators work together during the live broadcast. The viewer does not hear the interplay on talkback microphones. While one commentator is explaining a topic, the director will position the cameras for the next topic based on an observation by the other commentator or the producer. It is essential that the commentary team only talk about the pictures that are on screen. There is a broad range of sailing ability of viewers ranging from Olympic champions to people who have never been on a boat. It is a tricky balance to keep everyone who is watching engaged.

The field of play in many sports is relatively small, but sailing is different. Turning marks can be one mile apart and sometimes even more depending on the class of boat. Knowing which boats to follow is important. Often the finish between two boats back several places can determine the winner of the regatta. The medal race adds to the interest level, because only the top 10 boats in the standings compete. Points are doubled so there is plenty of opportunity to move up the leader board. 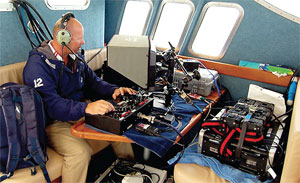 Top: China’s Lijia Xu celebrates in front of a gyro-stabilised camera platform at the London 2012 Olympic Regatta. Operators control these cameras using joystick controls inside the vessel while staying in constant contact with the TV director onshore

Immediately before heading out onto the racecourse, or right after the race, sideline reports interview the contestants. These are unscripted moments. There is considerable emotion around the waterfront. As a viewer, we want to cheer for our favourite team, and learn what the sailors were thinking out on the course. These spontaneous interviews make great theatre.

Over the past year the International Sailing Federation (ISAF) has presented four live telecasts of Sailing World Cup competitions from Santander, Spain; Abu Dhabi, UAE; Hyères, France; and Weymouth, England. ISAF is committed to providing live coverage of future events. Viewers from all time zones want to see the action as it takes place. During the combined Olympic Classes World Championships in September, 23 broadcasters from around the world took the live feed. In territories without a host broadcaster ISAF distributed the programmes on our own World Sailing Television network using the internet.

Sunset & Vine is currently the leading production group broadcasting sailing. ISAF engaged Sunset & Vine, based in Oxford, England, to produce our live feeds and assist in lining up global broadcasters. At Weymouth in June BBC Red Button, ESPN3 (USA), Canal+ (France), NEO Sports and SKY were among the live broadcasters. In addition dozens of other media outlets took daily news reports on the racing throughout the entire regatta. The medal races were broadcast live.

ISAF plans to broadcast more live sailing events leading up to the Olympic Games in Rio de Janeiro in August 2016. In the past two summer Olympic Games, in Qingdao, China in 2008 and Weymouth, England in 2012 our television broadcast received the award for best production by any sport from the International Olympic Committee. At the next Olympics onboard cameras will be added in several of the classes. At this writing, 15 days of live coverage of sailing are scheduled for worldwide broadcast. Tune in to our next programmes to watch your favourite sailors go for gold.
Gary Jobson, vice-president