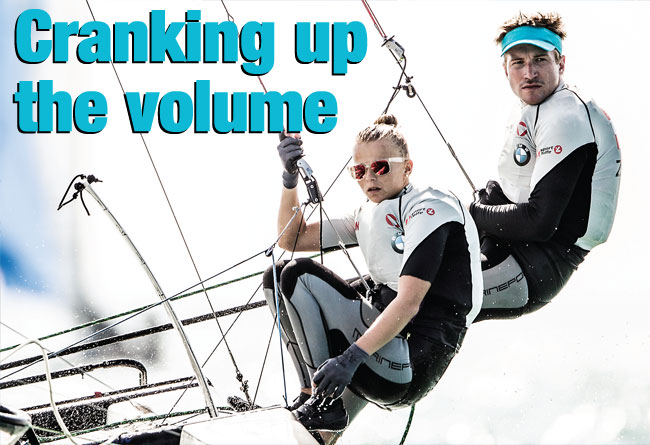 JOHN CRAIG and continuing improvements to the Sailing World Cup

At the 2014 International Sailing Federation mid-year meeting in May, driven by the vision of ISAF president Carlo Croce, it was decided that the ISAF Sailing World Cup should be reinvigorated.

The goal was to change the five ISAF Sailing World Cup regattas and refocus, highlighting the elite athletes of Olympic sailing and steering the series towards a more commercially viable platform. This vision also included adding an additional regatta to the schedule, to take place in November 2014 in Abu Dhabi and be named the ISAF Sailing World Cup Final.

Above: the Morrelli & Melvin-designed Nacra 17, which must be raced with a mixed-gender crew, has brought another breath of fresh air to Olympic and ISAF World Cup competition. Only the Finn remains as an Olympic class for the bigger sailor; however, the degree of athleticism and sheer strength demanded by the Finn’s move to free-pumping ahead of London 2012 totally refute any claims of the Finn as a ‘fat man’s’ class

To achieve these goals a new format was adopted by the ISAF Sailing World Cup Series. Host venues rebid based upon a new structure to deliver smaller, elite-level fleets with the best of the best competing internationally. Changes include revised entry quotas, shortening the racing schedule by one day, qualification rounds being removed, live television, prizemoney, increased logistical support and a greater onshore presence. These quickly became the buzz phrases prevalent throughout the regattas, enhancing excitement among sailors, media and public.

The delivery of 270 of the world’s best Olympic sailors from 38 nations across the 10 Olympic disciplines, plus an Open Kiteboarding demonstration event in Abu Dhabi, was no small undertaking. This was all compounded by having just five months in which to get it done. The support of the organising authority in Abu Dhabi, coupled with the desire from the athletes, team leaders and classes to see the regatta succeed, was impressive. The World Cup Final ended up delivering four days of incredible racing with an amazing backdrop and a strong proof of concept to build on.

The next stage was the implementation of a qualification system that would grant invitations to 40 individual teams across each Olympic discipline. Hyères would be the first to implement this limited entry of 40, utilising a new centralised registration system within the ISAF Secretariat. The first round of Hyères invitations went out to the top 30 teams based on the ISAF World Sailing Ranking release on 2 February 2015, immediately after ISAF Sailing World Cup Miami.

The second round was based on the results from the qualification regatta, Trofeo Princesa Sofía Regatta in Palma de Mallorca, Spain, with the top 10 teams on the leaderboard who had not yet qualified receiving invitations. This system was also implemented for ISAF Sailing World Cup Weymouth & Portland, using the ISAF World Sailing Rankings following Hyères and the results from Delta Lloyd Regatta in Medemblik for qualification.

This system has resulted in several positive outcomes. Scrutiny of the ISAF World Sailing Rankings has increased, which will result in positive refinements. Entry numbers at the identified qualification regattas, Princesa Sofía Regatta and Delta Lloyd, have seen a great improvement. Palma de Mallorca welcomed 1,200 sailors while Medemblik saw 700 sailors compete with record numbers recorded in several of the classes.

ISAF Sailing World Cup Hyères was a good indicator that we are heading down the right path but there is still a lot of work to be done. We continue to refine our commercial product, with increased branding and the development of the onshore facilities that will be present at all the Sailing World Cup events from now on. Refinements and discussions on race management and measurement are ongoing as we look to optimise these key parts of the regatta experience for the athletes as well as those watching. On the water, racing was tight in Hyères with high-quality fleets, live TV for the Medal Race day, prizemoney and some interesting conversations with potential partners.

Additionally venues are more engaged as we try to develop a more cohesive circuit – a single event guide highlighting all stops and partners is one example of this. The next ISAF Sailing World Cup stops on the 2015 series are Weymouth and Portland, Great Britain, Qingdao, China and then the World Cup Final in Abu Dhabi, UAE.

The 2016 series commences once again in Melbourne, Australia in December 2015 at a new venue in the bustling hub of St Kilda before stopping off at Miami, Hyères, Weymouth, Qingdao and Abu Dhabi once again.