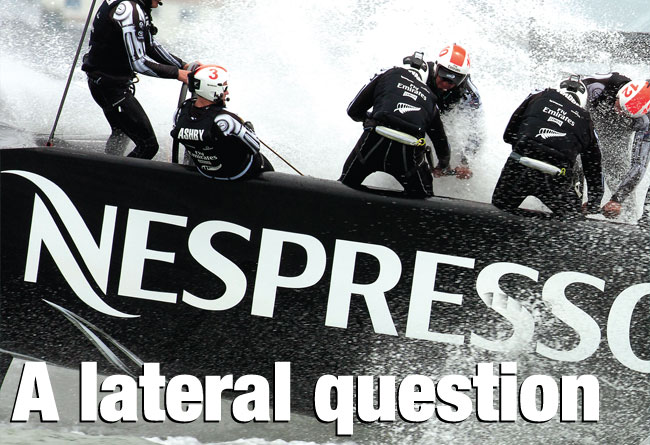 If you could design and build the fastest foiling machine possible, what would it look like? Has anyone truly addressed this fundamental question in the sailing world? At least on a practical level.

For a number of years a few novel hydrofoiling projects have been bubbling away in the background, largely unnoticed and of little interest to the wider sailing community. Perhaps the best known is Hydroptère, the experimental foiled trimaran creation of French yachtsman Alain Thébault. But it wasn’t until the foiling AC72s set San Francisco Bay alight in the America’s Cup summer of 2013 that the sailing world really started to sit up and take notice of technology and performance possibilities that had lain dormant for many years.

Since then we have seen a proliferation of foiling designs hit the market, from GC32s, to the smaller Phantom and Nacra doublehanders, to the spectacular Gunboat cruiser Timbalero III, which has been blowing up the internet with its breathtaking videos from the Caribbean, not least its slow-mo capsize during Les Voiles de St Barths.

But is the foiling technology that we’re seeing now still going to be the foiling technology of 10 years’ time? No doubt the developments at America’s Cup level will help inform the R&D process, but one has to wonder if Cup technology really holds the answer, particularly the 2013- generation 72-footers. After all, the AC72 rule was originally written to prevent foiling, and it was only the fact that the Kiwi design team (which included one of the authors of the AC72 rule, Pete Melvin) worked out a clever loophole that they managed to get their Emirates Team New Zealand boat flying above the water.

The C-Class community hastily started exploring foiling technology for the Little America’s Cup in Falmouth, which took place just a few weeks after the America’s Cup concluded in San Francisco. Longtime Tornado Olympic campaigner and veteran of many long-distance races in small multihulls, Will Sunnucks drove over from Essex on the other side of England to take a look at what the C-Class catamarans were up to.