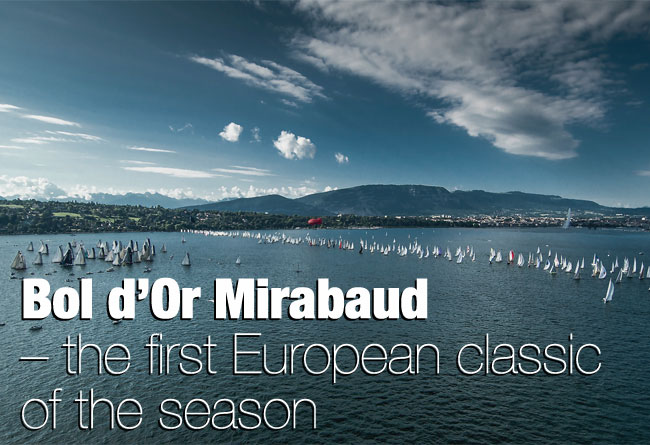 Cowes Week, Centomiglia (Lake Garda), the Blue Ribbon (Balaton) or the Barcolana (Trieste, Italy) share the same philosophy: they are big and popular events, yet they manage to attract some of yacht racing’s greatest names thanks to their prestige

They share many things: they are open to true amateurs yet they attract some of the world’s best professionals, for most participants they represent a personal challenge and they all take place in beautiful surroundings.

On 13 June the 77th edition of the Bol d’Or Mirabaud will be the first of those European classics, gathering a mixture of high-tech carbon multihulls skippered by professional sailors alongside true amateurs sailing on all sorts of boats, ranging from classic wooden designs to one-designs and cruising boats.

‘It’s what makes the beauty of this event,’ says Antonio Palma, CEO of Mirabaud & Cie SA, the event’s title sponsor, whose team won their class in last year’s event. ‘It is open to every sailor, no matter if he is competitive or not. I personally try to participate every year, onboard a 7.5m Surprise onedesign; I always find it very special to be on the same starting line as some of the best sailors in the world. Ten minutes after the start they have already disappeared over the horizon, but we are still competing in the same race and that’s what makes it so special.’

Rodolphe Gautier, the new president of the Bol d’Or Mirabaud organising committee, is determined to further enhance this mix and also to make it more international.

‘There is a degree of tourism in yacht racing,’ he observes. ‘Some people put their boat on a trailer and are ready to drive 1,000km to discover a new race. I think it’s a great way to spend your holidays and to discover new sailing grounds, and I hope more people will follow the trend.’

Gautier accepted the role of president of the Bol d’Or Mirabaud under one condition: that he could still participate in the event. Skipper of the high-tech Ventilo M1 catamaran Safram (SUI 50), which won the 2013 Bol d’Or Mirabaud (then skippered by Jean-Philippe Bucher), he is determined to show the way. ‘After this summer’s Bol d’Or Mirabaud we will travel to Lake Balaton and then Lake Garda with Safram. I really look forward to competing in those events, and I hope that many others – with whatever boats – will do the same!’

Spindrift racing in the Tour de France – a good team-building exercise
Dona Bertarelli, Yann Guichard and their team Spindrift Racing will compete in this summer’s Tour de France à la Voile to enhance their competitiveness and keep working away on the water – a choice that might sound surprising considering the team’s intense programme (Jules Verne Trophy, defence of the Bol d’Or Mirabaud, GC32 circuit…). Yann Guichard explains the reasons behind the decision.

‘The DM 24 platform chosen for the Tour de France à la Voile is based on a pretty basic concept that is quite the opposite to today’s usual style, employing simple trimarans that still mainly sail on the central hull… no foils and no wings. However, I see many benefits in racing the TdF; first of all, it will keep us competing throughout the summer on interesting courses – a mix of coastal raids and windwardleeward courses. And most importantly, there are no fewer than 30 teams including most of the big names, so the boats might not be very exciting but the racing will definitely be intense and spectacular.’

The fleet for the next Tour de France will indeed be hugely competitive, with names such as Cammas, Desjoyeaux, Beyou, Riou, Lemonchois, Coville… Guichard and his team’s goal is nevertheless clear and ambitious: ‘We are here to win.’

The one-design aspect of the fleet has undoubtedly set the bar high: ‘It’s quite simple, we are not allowed to do anything to the boats. Even the sails, built by EuropSails, are one-design. It’s therefore really the teams who will make the difference.’

And perhaps the reliability of the boats? ‘It’s true, this is a new class,’ admits Guichard. ‘These boats have been designed to ease access to multihull sailing for amateur sailors. We will sail completely differently, and push quite hard. It will be interesting to see how the boats stand up to a month of intense racing.’ 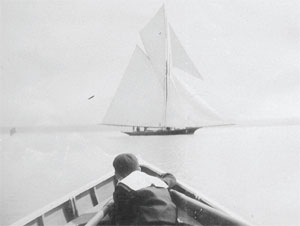 Yann Guichard plans to rotate his crew through the summer to give everyone a chance to race. ‘We want as many team members as possible to be involved. For us it is a good teambuilding exercise. We can’t just take the maxi trimaran Spindrift 2 for a spin; it’s a pretty complex operation… On the other hand, we can go out and train on the Diam 24 for a couple of hours at any time of day. It’s very practical.’

Parallel to the Tour de France à la Voile, Spindrift Racing carry on preparing their monster trimaran for the round-theworld attempt. The team will also compete on Lake Geneva’s Décision 35 circuit, as well as on the GC32 circuit. ‘Sailing in so many different classes will obviously be demanding from a technical point of view, but we believe that the future of yacht racing is in flying multihulls and we want to get up to speed.’

A century-old passion
Mirabaud’s brand is already well known on the pontoons throughout the world, among other things for the banking and financial group’s support of Yann Guichard’s Spindrift offshore maxi trimaran (second in the latest Route du Rhum), sailor Dominique Wavre (seventh in the last Vendée Globe), the Mirabaud LX foiler or the Mirabaud Yacht Racing Image award.

However, it is a less known fact that the group – and its founding family – have been involved in yacht racing for over a century. Since 1888, according to the archives, where you can find a picture of the Seven-Tonner Squaw... (pictured above) the property of Ivan Mirabaud. Squaw was arguably one of Lake Geneva’s first real racing boats.

Born in 1850, Ivan Mirabaud was the great-grandfather of Yves Mirabaud, one of today’s five managing partners of the group that bears the family name and current chairman of the board. He is probably the key figure in terms of generating this long passion for yacht racing. 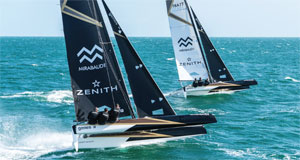 Ivan’s direct descendants were well known on the shores of the lake for their beautiful raceboats all bearing the name Fly – no fewer than six examples of which were raced actively. Further down the family tree, one also discovers typical lake boats such as the 6.5m Hoccos, the 15m SNS as well as a Two Tonner.

Today Mirabaud perpetuates the family tradition by supporting some of the world’s best sailors and most exciting projects such as Spindrift Racing, alongside the popular Bol d’Or Mirabaud. Indeed a century-old tradition.