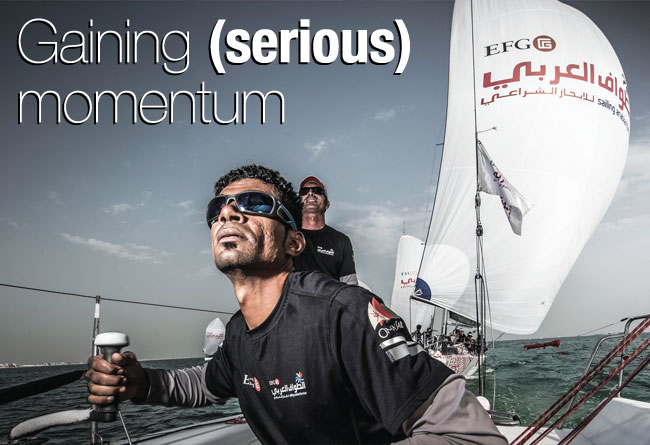 EFG Sailing Arabia – The Tour (EFG SATT), Arabia’s no1 offshore race organised by Oman Sail, had it all at the fifth edition this year: an epic new course, some of offshore sailing’s big names, young up-and-coming youth teams giving the pro crews a run for their money and a lively mix of hard-core competition and cultural diversity with sailors hailing from 21 different nations.

The two-week 760nm race saw the 11-strong fleet start in Muscat, Oman, for the first time and race to Sohar, around the Musandam Peninsula – one of the most beautiful sights in the Sultanate, east into the Gulf of Arabia, stopping at Ras Al Khaimah, Dubai, Abu Dhabi, Doha and culminating in Manama, Bahrain… where overall victory went to EFG Bank (Monaco), skippered by roundthe- world sailor Sidney Gavignet and crewed by a mixed Omani and European team.

The standard of competition among the pro-am teams from Switzerland, the UK, Kuwait, Oman, Holland and China was at an all-time high. Oman Sail’s vision to promote the Gulf region as an alternative international race destination is firmly on track.

One of the interesting links with this edition was the connection with the Volvo Ocean Race – with several professional teams identifying EFG SATT as a high-profile and challenging winter training option. The intensity of the 14-day, six-leg race, peppered with a series of in-port competitions, is a challenge that clearly appeals to many professional teams.

Onboard GAC-Dongfeng, skippered by Nick Moloney, three Chinese Dongfeng VO65 crewmembers were using EFG SATT to continue the offshore learning. ‘The Tour is part of our VOR training programme and is a good foundation for the VOR because the Farr 30 is just a smaller one-design – as is the new VO65,’ said Kit Cheng.

EFG Bank (Monaco) crewman, Ireland’s Damian Foxall, fresh from victory, headed straight from the finish to Auckland to compete in Leg 5 of the VOR with Charles Caudrelier on Dongfeng. Commenting on the Tour as a vehicle to prepare professional teams, Foxall added: ‘It is a good format, a bit like a mini Volvo Ocean Race in a way, except the overall event is somewhat shorter! But you still need to pace yourself along the way, and the racing is extremely close.’

Recognising EFG Sailing Arabia – The Tour as a development race for young offshore sailors, VOR organisers launched the Volvo Ocean Race Rookie Award for the two best under-30 sailors in the event. The prize of a return trip to Newport for the full VOR experience during the stopover there went to Omani Ali Al Balushi (on all-Omani crewed Team Renaissance) and British sailor Richard Mason (Team Averda).

Gavignet and his champion crew – Damian Foxall, Alex Pella, Nicolas Lunven, Fabien Delahaye, Mohammed Al Mujaini, Abdull Rahman Al Mashari and Abdallah Al Shukaili – won all but two of the six legs and finished the event 9.25pt clear of second- placed Marcel Herrera and his mostly British crew on Team Averda. On the course change to east-west, Gavignet said: ‘It was more difficult, but the harder it is the better it is for us. I also believe that the tougher it is, the more the event’s reputation will grow.’

Tough it may have been but this didn’t seem to affect amateur teams including Marcel Herrera and his young, mainly British student team. Although they didn’t win a race, they were consistent and finished second overall for the second year running. The only teams to break EFG Bank (Monaco)’s hegemony were the Dutch team of skipper Wouter Sonnema and a student crew from Delft University of Technology, onboard Delft Challenge, and the Zain Sailing Team from Kuwait.

Zain, headed by seasoned French Tour competitor Cédric Pouligny with Gérald Véniard on navigation, and his crew of enthusiastic novices made up of employees of Zain – one of the Middle East’s leading mobile telecoms operators – won the final, windy leg from Doha to Bahrain. This was enough to lift them up the rankings to the final podium position, leaving Delft Challenge in fourth.

David Graham, CEO of Oman Sail, concluded: ‘I am delighted that this year we had 11 commercially funded teams with a strong mix of youth, women, high-calibre professionals and regional sailors. It’s rewarding to have such a diverse line-up as that is absolutely what we are about. The course change from east to west made it exceptionally tough at times; couple this with the highly competitive nature of the event and the Tour is steadily evolving as a “mustdo” event on the global calendar.’