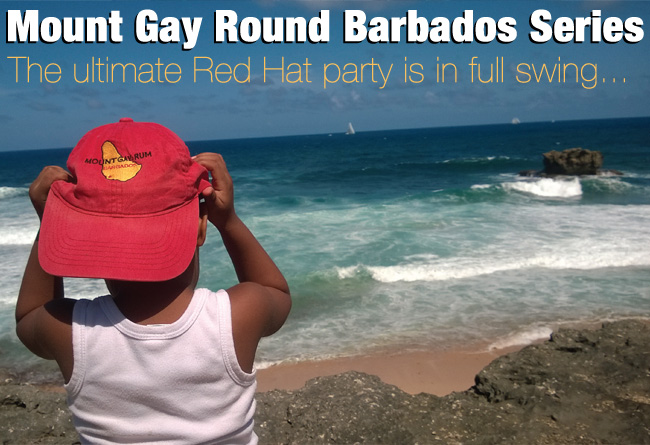 Since its relaunch five years ago the Mount Gay Round Barbados Race Series has developed into an event that offers golden opportunities for teams looking for top class but seriously fun racing...

There can be few sailing venues to beat Barbados… host to the ultimate Mount Gay Rum Red Hat Crew Party. Barbados, the home of Mount Gay Rum, and affectionately dubbed as the seafarers’ Mecca, continues to attract those who enjoy a fun element along with the serious side of sailing. The Mount Gay series, which incorporates three days of coastal racing, the headline event – the Mount Gay Rum Round Barbados Race – and a final 300- mile ocean race to Antigua to tie up with the Superyacht Challenge, is organised by Barbados Cruising Club in association with Barbados Tourism Marketing and Mount Gay.

Next year the event, which runs from 16 to 24 January 2016, celebrates its 80th anniversary, which means there’ll be even more of an excuse for a week of hot sailing and rum-fuelled partying.

By the nature of its date, which always falls in mid-January, this annual regatta marks the opening of each Caribbean race season. It not only serves as a warm-up for teams competing on the Caribbean circuit, but also acts as the perfect post- Christmas winter escape for crews from the Northern Hemisphere.

The Mount Gay Rum Round Barbados Race, which traditionally takes place on a public holiday (21 January) to celebrate Errol Barrow Day (birthday of the first Prime Minister of Barbados and ‘father’ of independence… and also keen member of the Barbados Cruising Club), is one of the key attractions of the annual series.

While big boat racing teams from around the world are beginning to recognise the event as a strong component of the Caribbean race circuit there are also more and more charter and blue water cruising yachts taking part. Overseas competitors, who made up a large part of the 49-strong fleet in 2015, represented 11 countries including a strong contingent from the UK, plus teams from Canada, New Zealand, the USA, Lithuania, Slovakia, France, Poland, Germany, Argentina, plus of course many neighbouring islands.

Event manager Alene Krimholtz commented: ‘We are delighted that this event has re-established itself not only as a major island attraction, but also as a key regatta on the Caribbean circuit. One of the main incentives, other than the warm Caribbean waters, miles of gold sandy beaches and generally constant 12-18kt east to east-north-east trade winds… is the opportunity to break records in the 60-mile Round Barbados Race. We hope the 2016 event, which celebrates 80 years for the series, will encourage even more teams to join the fun.’

The teams on British charter company yachts were notable for their impressive performances in 2015. The Bénéteau 40 Lancelot II – a Britannia corporate charter yacht sailed by Chris Jackson and a team from Slovakia – won the CSA Racing division, while the British Stormforce Coaching charter yacht Palpatine (Stimson 42) skippered by Doug Innes took line honours in the Round the Island Race and in doing so also won the 50ft-and-under class. 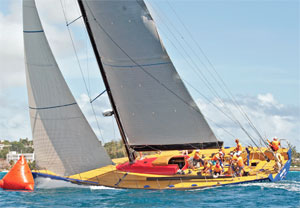 Although the potentially challenging upwind passage to Barbados can act as a deterrent to some overseas visitors, those who do make the journey generally all agree that once they arrive in Bridgetown it is one of the most logistically friendly Caribbean regatta venues. The host club – Barbados Cruising Club – sits conveniently at the hub of the regatta, on the beach at the southern end of Carlisle Bay, which means most activities take place there or just a few strides along the beach at Barbados Yacht Club. For charter guests there is a reliable taxi service from Grantley Adams International Airport. And the most convenient hotel, the Radisson Aquatica Beach Resort, is sandwiched between the two clubs. Bridgetown, the capital, is just a short taxi ride along the coast.

Peter Anthony, owner of the Ondeck Farr 65 charter yacht Spirit of Juno, said: ‘For us the event is a tasty Bajan cocktail with a strong appeal for our clients. To be able to visit Barbados and experience the island’s warmth and hospitality mixed with a good measure of sailing and a generous splash of Mount Gay Rum works extremely well. Why wouldn’t it! Many of our clients also sign up for the passage to and from the regatta to clock up experience and build sea miles.’

The event is also seeing something of a classic revival with several notable yachts on the startline in 2015, including the 55m racing schooner Elena of London, the 33m brigantine Tres Hombres and the locally built 30m schooner Ruth. It is hoped that more classics on the circuit will see this event not only as an opportunity for an early-season shakedown but also to help uphold a tradition that dates back 80 years. The first race in 1936 was based upon bragging rights for the fastest trading schooner round Barbados. In that first race a total of five trading schooners (Sea Fox, Mona Marie, Marion B Wolfe, Lucille Smith and Rhode Island) took up the challenge. Sea Fox (Captain Lou Kenedy) was the overall winner with a time of 10 hours 20 minutes.

Interestingly, and not surprisingly, however, the consolation prize of a barrel of Mount Gay Rum for the slowest yacht was discontinued several years later following the discovery that many competitors purposely remained out at sea for days to ensure that they won the prize… Now, of course, it is possible to win the skipper’s weight in rum as a prize for the fastest times – if any of 14 Round Barbados Race records are broken. This year three teams managed to scoop the top prizes which amassed a total of 78 cases of Mount Gay Rum.

Dave Staples on Hallucine (Pogo 40) took the Doublehanded Monohull record (25 cases of rum) with a time of 7:29:51. Paul Johnson on Conviction, the local TP52 sailed by Clint Brooks and representing the Barbados Offshore Sailing Syndicate, took the 60ft-and-under monohull record with a time of 6:07:06 – and in doing so won 32 cases of rum. The one-design J/24 record and 21 cases of rum went to Jason Tindale and team on College Fund$, who recorded an impressive time of 9:6:38. 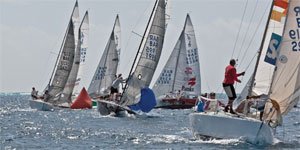 Although the outright course record remains in the hands of Andy Budgen and team on the British VO70 Monster Project (with a time of 4:42:28 set in 2014) it was good to see some serious challengers this year including Conviction (TP52), two VO60s Cuba Libre and Ambersail, and a Farr 72 – Maximizer – chartered by none other than the American Embassy in Bridgetown.

The impressive standard of sailing in the local J/24 fleet will hopefully attract bigger numbers in the future, particularly with the opportunity for visitors to charter local boats. Although most of the eight-race, closely fought J/24 Coastal Series takes place in the beautiful setting of Carlisle Bay on windward-leeward courses, for the first time in 2015 the J/24s were granted fleet status in the Round Barbados Race.

Robert Povey, overall winning skipper of the J/24 Coastal Series sailing Hawkeye, commented: ‘I think Barbados as a sailing venue is one of, if not the, most incredible places to go sailing in the world. I am hoping that next year we’ll be able to encourage more international J/24 teams to participate, particularly from the USA and of course Europe.’

Peter Gilkes, yachting consultant to Barbados Tourism Marketing, who has been involved in the organisation of the event for many years, believes the future looks bright: ‘Our event has grown with each passing year and this has not gone unnoticed by those who are charged with making key decisions within the tourism arena. As the event continues to grow our product can only get better with each passing year.’
Sue Pelling