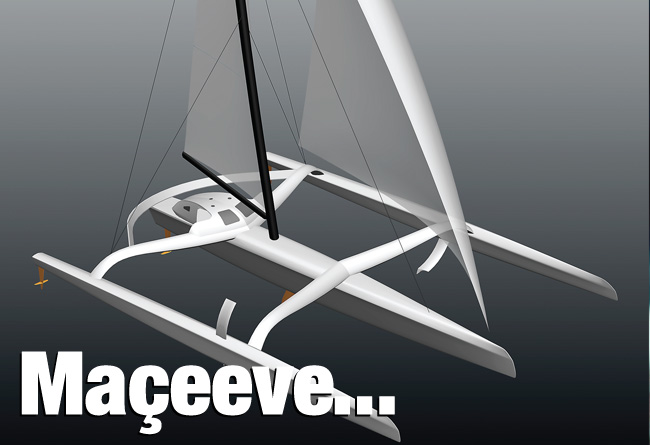 Or is it really? Before the 2010 Route du Rhum the latest VPLP creation would have created quite a sensation, but the truth is that in less than five years things have moved on considerably as far as our perception of ‘big’ multis handled by soloists is concerned. Joyon, MacArthur and Coville opened up a new dimension in singlehanded multihulled circumnavigations in the early 2000s, and subsequently (really) big tris handled by lone sailors have become a more and more usual sight on the transat circuit… Nevertheless, to think that a handful of pioneers are now already imagining and building a new generation of multis with the intention of racing them solo around the globe is somewhat staggering. Leading the charge is the all-conquering François Gabart, who had started to dream up his latest project while still on his way to the Sables d’Olonne finish line of the last Vendée Globe.

‘He was thinking about what he could do next,’ says Xavier Guilbaud who oversees the Macif 100 dossier at designers VPLP’s Vannes office. ‘He came to talk to us about the idea in June 2013, and we came up with a blueprint at the end of that summer.’

In September 2013 Macif both gave the programme the thumbs-up and appointed VPLP, after reviewing various rival submissions. François Gabart gathered around him a team of experts who have worked together for more than 20 years, and who incidentally also constitute the core of Artemis’s design team for the next America’s Cup – Vincent Lauriot Prévost for the naval architecture, Hervé Devaux of HDS for the structure of the platform and Michel Kermarec, responsible for the design of the Artemis appendages.

The build phase then ensued swiftly, with mould production underway in February 2014, after four-and-a-half months of research work on hull shapes. ‘The design brief was specifically geared towards an offshore multihull for a singlehander,’ notes Xavier, ‘with a round-theworld campaign on the list of objectives. François’ main questions to us revolved around the amount of power that he would be able to fully exploit.’