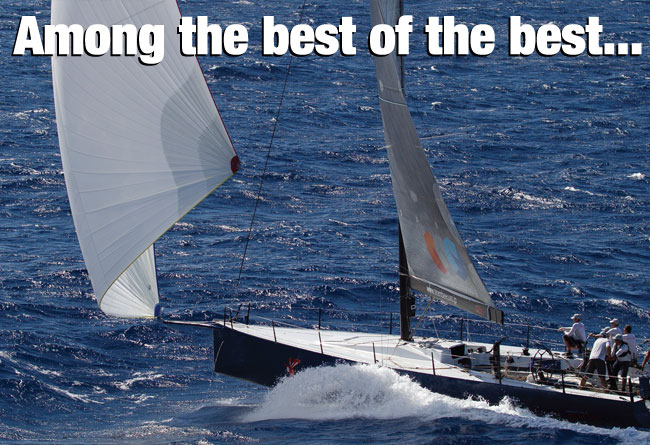 ‘This is one of the best offshore races I have done, definitely a race not to be missed’.

So said Russell Coutts after sailing the 2005 edition of the Transpacific YC’s race from Los Angeles to Honolulu, known the world over as the Transpac. This iconic ‘race to paradise’ is known well by all those who have dreamt of sailing west over the horizon to a warm, palm-fronded tropical isle. It’s no wonder the race has enjoyed and grown its universal appeal to the world’s best sailors to test themselves and their boats in this 2,225-mile ocean racing classic.

The idea of a yacht race to Hawaii started back in 1886 when King Kalakaua invited yachtsmen on the mainland to come to his 50th birthday party and to bring their boats to Hawaii to enjoy the culture’s legendary hospitality. He proposed an ocean race from San Francisco to Honolulu, for which he even offered prizes, with first place to win $US1,000… a great deal of money back then.

It took another 20 years, but this new race was finally organised for 1906 with three boats interested in starting, when the devastation of the San Francisco earthquake prompted a rapid relocation to Los Angeles. In this race another new concept was tried: time allowances, where 30 minutes per foot LOA was used for this race, based on a study of the system used in the previous year’s Emperor’s Cup race from Sandy Hook to Lizard Light, won by the now legendary schooner Atlantic.

Ever since, the Transpac has been at the forefront of encouraging fair racing among fast, seaworthy yachts, with the new trends developed to win this race being exported to the rest of the offshore yachting world. In 1977, for example, Jim Kilroy’s S&S 78ft ketch Kialoa was routinely winning races around the world, and had an early lead in that year’s Transpac, when she was passed once the wind went aft by Bill Lee’s Merlin, a new breed of Ultra Light Displacement Boat (ULDB) that would dominate the Transpac for another two decades until the next generation of fast offshore boats were developed: the TP 52s, a class developed by and for the Transpac.

The stellar performance of these boats is also now well known, a testament to the ideas first generated in this race for what has gone on to become one of the world’s most exciting classes of offshore race yachts. 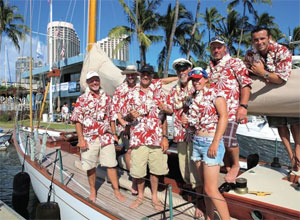 Top: TP 52 Beecom close to the finish line at Diamond Head
Above: 1936 and 2013 overall winner Dorade Inset: the winning crew of Dorade

The Transpac itself has evolved to embrace other new trends and technologies in design, such as water ballast, canting keels and the like, all of which have contributed to shortening the course records down to the current mark of 5d 14h 36m 20s set in 2009 by Neville Crichton’s Alfa Romeo. Multihulls are also embraced by the Transpac, which is fitting since their history after all started in Polynesian culture.

But these elite first-to-finish contenders, whether they are eligible for the legendary Barn Door Trophy in not having stored energy, or the Merlin Trophy if they do, are only a small part of the long history of the Transpac story: hundreds of sailors do this race on boats of many sizes and types, all for the fun, the adventure and the lifelong camaraderie that comes from being on a sailboat at sea for up to two weeks – and sometimes more.

They come for the classic course that skirts the southern edges of the North Pacific High, starting in the cool, foggy waters of coastal California, then becoming gradually warmer and sunnier as the wind goes from beating to reaching to running, to finally end in a spectacular few days of spinnaker running to the finish line off Oahu’s Diamond Head, just east of the regatta’s shoreside venue at Waikiki. Here the exhausted but elated sailors return to terra firma to reconnect with their loved ones, receive their traditional Hawaiian leis, and enjoy a warm Aloha welcome party held for every finisher, regardless of the time of day or night and their position in the race.

Come and experience the Transpac and find out why so many have also said this is ‘definitely a race not to be missed’.