Carl Ryves is one of Australia's most highly respected sailors. Jim Hardy calls him 'the complete yachtsman – he built his own boats and made his own sails, and if you beat him you knew you had sailed a good race.' Blue Robinson caught up with Carl at his Lane Cove home in Sydney

It was Gretel I's success in taking a race off US defender Weatherly in 1962 that prompted the New York YC to tighten the country of origin rules to stop challengers gaining access to American technology.

Carl Ryves is the oldest teenager I know. Just turned 70, he has the energy and drive of a man a third his age, but it is the sheer enthusiasm and fun of the guy that bubbles over every time you meet him. His broad grin and infectious laugh are a delight to his friends around the world. Two things distracted me as we sat chatting on the veranda outside Carl's Sydney waterfront home. Firstly, in Carl's animated excitement at telling a story, he constantly veers off at a right angle to tell an even funnier story. And secondly, the tame, brightly coloured lorikeet birds that perched on the top of my head during the interview, looking for their evening feed from one of Australia's finest and most modest sailors.

Carl was born in 1940 and his first sailing experience was on the American designed 25ft yawl-rigged Sea Bird that his father built after World War II. Dad then built Carl a VJ (Vaucluse Junior), an unsinkable junior boat, when the young Ryves was 11, which Carl sailed but never raced, instead enjoying the delights of growing up in Sydney.

'When builders were repairing roofs in our street, we would grab a sheet of tin and use that for a canoe, bend up the ends, jam a stick across the middle and go off and paddle it on the river. We would get the tar off the roads on a hot summer's day to seal the leaks and hide our "boats" in the bushes, as other kids would pinch them if they could find them...

To read on simply join us TODAY!!!!!
Please take advantage of our latest subscription offer or order a single copy of the January 2011 issue of Seahorse International Sailing

Below: Carl Ryves (facing camera) in Sydney in 1970 on Gretel I with skipper Jim Hardy while the boat was helping her even faster Alan Payne-designed successor Gretel II prepare for that year's America's Cup. 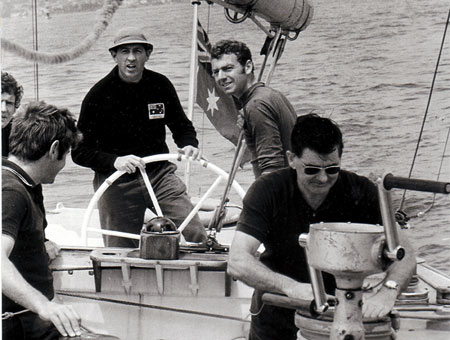