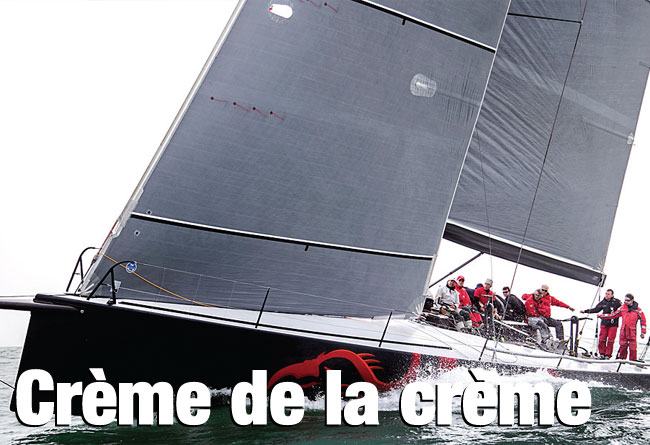 The first TP52 built to the 2015 TP52 Rule is sailing. ‘Phoenix is her name’ and my undoubtedly biased opinion is she is a stunner. First time I will see her for real and be able to go onboard to check out the detailing will be at the Gaastra Palma Vela. The 52s that raced in Key West and Miami are on their way back to Palma to prepare for the four-event Barclays 52 Super Series 2014.

In Miami we saw Quantum Racing win the event and win the US Super Series overall, Azzurra in second for both Miami and overall and a very strong first outing by Sled in Miami for third with 33pt, just overtaking Interlodge – also with 33pt – on countback. Interlodge, however, took third overall in the US 52 Super Series to squeeze Rán off the podium by just 1pt.

Visible change from Rolex Capri Sailing Week onwards will be the 2015-sized bowsprits and corresponding larger kites. Capri, Porto Cervo, Palma and Ibiza should bring the mix of conditions that over around 37 races without discard produces a worthy winner. We start in Capri with a nine-boat fleet and our new title sponsor Barclays, both very positive developments.

Planning for 2015 is to have a five-event 52 Super Series raced in co-operation with clubs and ports in the western Med. I expect a number of new builds – between six and nine boats – and we judge it good policy not to start travelling a lot straightaway but give teams time close to their home bases to sort out these new boats. Next month I hope to be able to announce names, designers and builders and in July event dates and locations.

The commitment to run the Super Series for at least three more years and introduce the 2015 Rule, producing faster and better-looking racing machines, has triggered early interest and planning. Which also opens the door for others to step in relatively late, until the end of 2014, and still be in time to race from May 2015, if one of the by then existing moulds are used.

Meanwhile, at least three very good ‘latest model’ TP52s which are easy to upgrade to the 2015 Rule will have come on the market. To scoop up the best 52s of this moment, like Rán or Quantum, is a rare opportunity. They do not come any better than this. If owning a TP52 and close racing are on your bucket list then this is the moment to join the 2015 Super Series.

Evolution never stops. Also not with TP52s. We manage to stretch their competitive life at the highest level to about seven or eight years by allowing older boats to go outside the TP52 box. But there comes a moment that so much of a boat is dated and tired that making further investments is less efficient than buying a more recent model.

For some the constant tinkering is part of the fun. Vesper is a good example of this. Making the right choices to optimise a boat for upcoming events is rewarding in itself and, for sure, a skill that takes some time to acquire. TP52 racing is good training ground for all involved in sailboat optimisation decisions as there is ‘nowhere to hide’. The box and the close racing format remove all excuses, the playing field is genuinely level.

This can be seen as the main reason why TP52s of all ages and pedigree do well in general handicap racing. They come from a high pedigree, whether design, build, maintenance, optimisation and racing. Honed in stiff competition over years and allowed by the class to follow trends through evolutionary rule upgrades, these boats are as close to monohull perfection as it gets.

At first sight the TP52 Box Rule is a handicap as it does not allow creative spirits to run free but on second thought and proven over the years, there is still so much to play with within the box that, instead of limiting creativity, the box helps to focus on what really makes a monohull of this size tick. And to focus on how to improve those elements that, yes, are limited, mostly in size or weight, but apart from that hardly ever in shape, quality and interaction in a way that makes near perfection a realistic goal.

No better way than to learn from real competition, racing boats of the same dimensions built to the same set of rules. But admittedly we have also learnt much from permitting older boats to go outside the TP52 box. It has given designers and sailors a much better perception of the essential elements of these boats and their rule and how these are balanced against each other.

Like the limits on draft and boat and keel weight. Like the limits on sail area, bowsprit length and rig dimensions and rig materials. It has given the class members the confidence to change the class rule in the direction of a lighter and faster boat, with more sail area, more draft, less headroom, more functional cockpit space and many more details. No need to talk for days and postpone decisions for years, or for ever, if you see boats that were permitted to race with us with those features and the effect they have on performance.

Not that there was never any doubt or scepticism. It is not easy to see a boat next to you on the line with more sail area and more stability. Not easy to realise the value of her being there in the full heat of the race while at the same moment she forces you to tack away. But when you see the first photos of Phoenix (pictured above) and her clean and functional pure performance looks I hope these difficult moments become sweet memories.

Not convinced yet? The only way to find out is to get one of these machines and join the fray. Yes, competition is tough at times, yes, running a team of near 20 sailors takes a good look at the bank account but, man, there are so many floating objects out there that are less purposeful, more expensive, less rewarding and quite frankly not proper race boats if held up to the light of competition, any competition.

The 52 Super Series or the TP52 class cannot and does not aim to be the only competition or boat in town. If I can shine my personal light, we aim to provide proper and fair racing in boats that one can be proud to own or crew, design and build. They are rather exclusive boats because of the size and cost element, but they are great fun to sail for all the right reasons that one became and is a boat owner and competitive sailor.

The TP52 is a boat for those who like team work as well as continuous optimisation. It is a series for those who like well-organised high-level competition in nice places. Not too complicated on the social or glamour aspects, in the sense that camaraderie and proper sailing come first. We like our toys but for their use and for the fun that use gives. Not to show off at the dock.

Which should not be confused with any reluctance to put up a good show on the water. One has to live in the here and now to win races and enjoy life. It is not always easy to mix that with making sure there is a future, whether for the 52 Super Series or in the general sense. As that quite often requires one to worry about where to go next and how to get there.

That can be a less glamorous job, as any tactician will tell you, but I guess somebody has to do it…