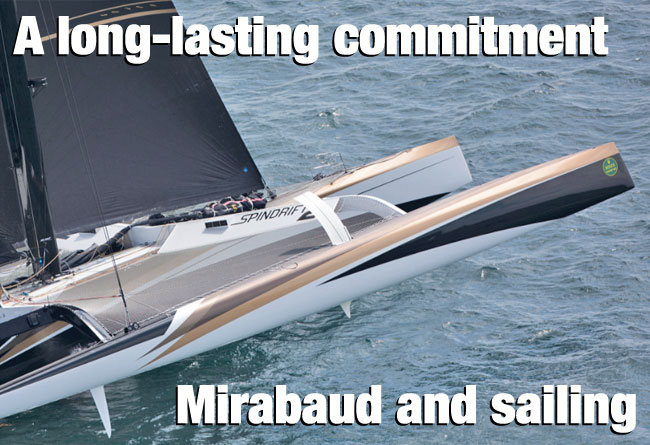 Mirabaud is proud to announce its new relationship as a main partner of Spindrift racing led by Dona Bertarelli and Yann Guichard, undoubtedly one of the Swiss private bank’s most ambitious sporting partnerships to date.

The challenge is very much in keeping with Mirabaud’s century old tradition of involvement in local and international sailing. The banking and financial group also contributes to the grass roots development of this sport and is involved in sailing event organisation.

Mirabaud has been title sponsor of Switzerland’s Bol d’Or since 2006 and has partnered Swiss sailor Dominique Wavre for the last three years, taking in the Vendée Globe, the Barcelona World Race and the Transat Jacques Vabre. Dominique has since become Mirabaud’s ambassador for sailing, and as such will maintain a regular presence at events and projects supported by the financial group.

The private bank is also main partner of the ‘Mirabaud Yacht Racing Image’, an annual professional photography competition that rewards the most beautiful sailing images of the year.

Mirabaud’s involvement in yacht racing dates back more than 100 years and is entwined with the company's traditions... the first boat race in the Mirabaud family was back in 1888.

Racing, and in particular offshore racing, requires organisational skills, discipline and determination. It is these qualities that have led Mirabaud to partner with Spindrift racing, a team that is playing a pioneering role in its quest to raise the benchmark on some of the world's most prestigious sailing records.

Spindrift – a new challenge with a world-class sailing team
Spindrift racing is a top-level sailing team founded in 2011 by Dona Bertarelli and Yann Guichard, who share a common passion for sailing fast. The team, specialised in multihulls, now boasts a three-boat fleet consisting of a Decision 35, Ladycat powered by Spindrift racing, a MOD70 trimaran, Spindrift, and a maxi-trimaran, Spindrift 2. Spindrift racing currently comprises a team of 30 made up of 15 sailors and 15 shore crew. The team competes under the joint colours of Mirabaud (Gold Partner) and Zenith (official timekeeper).

The 2014 season is set to be action packed, with the annual Lake Geneva Decision 35 championship on the cards for Ladycat while her much bigger stablemate Spindrift 2 is scheduled to take on the North Atlantic record during the summer. The record is currently held by the boat’s previous skipper, Pascal Bidegorry, who set a challenging benchmark in 2009, crossing in 3 days and 15 hours at an average speed of 33 knots.

Later this year, starting in November, Yann Guichard, skipper of Spindrift 2, will line up for one of yachting’s most epic sprints when he takes on the singlehanded transatlantic Route du Rhum from St Malo in France to Pointe-à-Pitre in Guadeloupe.

It was only in 2013 that Dona took a rather big step up in her sailing ambitions when she and her partner Yann Guichard acquired the maxi trimaran Spindrift 2 – the biggest and fastest offshore racing multihull in the world. In 2013, aboard Spindrift 2, she took line honours in the Fastnet Race and set a new record on the Route of Discovery. In 2014, with the support of Mirabaud and Zenith Dona plans to take on the legendary fully-crewed North Atlantic record...

Seahorse: How did your passion for sailing start?

Dona Bertarelli: I always loved sailing. I sailed with my family as a child and then with friends as a young adult, but it was always a hobby and in those days I was more of an active passenger than a crew member. I became more seriously interested when Ernesto [Bertarelli] created Alinghi: I followed his progress on Lake Geneva – particularly during the Bol d’Or Mirabaud – with interest and an increasing desire to become more involved myself.

SH: So you started racing a Decision 35 of your own – Ladycat?

Two questions to a proud partner

Mirabaud associate, Antonio Palma, is the man behind this new partnership between the group and the professional sailing team Spindrift racing. A passionate sailor himself, although only for pleasure, he is committed to Dona Bertarelli and Yann Guichard’s project and sees a productive fit with Mirabaud's own philosophy: ‘It exactly matches our commercial ambitions and is a vehicle to promote many of our core values, including entrepreneurship, competition, the pursuit of excellence and the best modern technology.

Seahorse: Why did you choose a relationship with this particular project?

Antonio Palma: Through this partnership, Mirabaud continues its involvement with the pinnacle of yacht racing both regionally and internationally. Spindrift racing has deep roots in Geneva and on the lake, as the team’s Decision 35 will race all the big local regattas this year, but it is also an international project with a global profile. Spindrift is without doubt the most important Swiss sailing project at the moment, and we are proud to be involved.’

SH: Does this project take your involvement in sailing to another, new level?

AP: Yes, certainly. The maxi-trimaran is taking us to the next level, to another dimension in fact! In recent years the Mirabaud group has reported steady growth allowing us to open new branches in several different countries. It follows therefore that our sporting ambitions grow accordingly and today we are delighted and proud to join Dona Bertarelli and Yann Guichard in the Spindrift family and to be integrated into this exciting project.

DB: Exactly. The night before the first regatta I was so stressed I didn’t sleep at all. I was a beginner alongside a crew of experienced girls and I wanted to forge a place for myself through my ability and not as an owner.

SH: What then drew you to offshore sailing?

DB: I have always been fascinated by the sea and multihulls and after a few years on the D35 I wanted to grow and learn a new dimension of sailing. Meeting Yann and seeing him develop on the offshore stage was obviously a bit of a catalyst. We both wanted to set up and share a project built on strong foundations. For him it is a progression of his offshore career, for me it is a turning point.

SH: And the first steps?

DB: I sailed a little on the MOD70 Spindrift, but it wasn’t until last year that I got my first real experience of offshore sailing on the maxi trimaran. This boat best suits my current offshore racing skills because it offers the flexibility I need in order to make progress at my own pace. I am approaching this project with a lot of humility; I am basically in an apprenticeship phase but I am determined to learn quickly and to play an increasingly active role onboard.

SH: So you are progressing step by step?

DB: Yes, exactly. The Fastnet was my first ever offshore race and it was welcome confirmation that I enjoy it and have chosen the right platform. I continued to train and progress as we set our sights on the Route of Discovery record.

SH: From your perspective what were the main challenges?

DB: Firstly we had to learn to master Spindrift 2; it is an incredible and hugely powerful boat. Also, the team had to gel. And finally, I had to make sure that I was coping with the demands of offshore racing, that I didn’t get seasick and that I was having fun. All these elements came together and it was an absolute revelation for me.

SH: And your goals going forward... 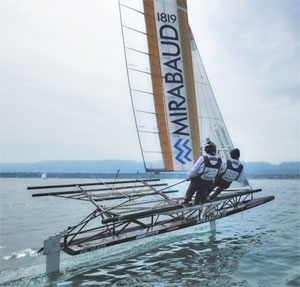 DB: In 2014, we will try to break the outright North Atlantic record. It will be a novel experience for me, as we will be sailing in much rougher conditions than what I’ve experienced to date. After that we have a very ambitious three-year programme that will culminate in a Round the World record attempt. It is an amazing goal and I am working hard towards it – however it is far too soon to know whether I will achieve the level of skill required to merit my place on board. There is no room for doubt when approaching such a long race on a boat that is so physically demanding. Until then, I will continue my apprenticeship and, if I fulfil all the conditions, then I will take part in this record attempt.

Click here for more information on Mirabaud and sailing »