Move on up
Fascinating... ANDY RICE talks to 505 and skiff champion MIKE MARTIN about his new role as the head of America's Cup umpiring for 2013

Masterful evolution
Botín Carkeek designs have dominated the last three years of TP52 racing in the Audi MedCup. MARCELO BOTIN explains the developments that have gone into his latest designs for 2011

Ease... slightly
JEFF KENT is a champion DN ice sailor who also builds some of the fastest boats and rigs in the class; together with fellow champion JAMES THIELER he explains the curious physics of DN development

Textiles to composites – Part 2
Buying into a barely proven technology and having to immediately replace the ingredients... BILL PEARSON on the birth of 3Di production

Original!
Three-time America's Cup winner MATTHEW MASON has not been idle between the big events

Update
TERRY HUTCHINSON gets to grip with electronic flags, ANDY RICE watches ISAF at work, TORBEN GRAEL has some strong views on the continual over-complication of sailing and ANDY HEMMINGS needs a new passport

IRC column
JAMES DADD on why lighter can now be better

Design – A universal hull?
He gave us the tandem keel (as well as numerous books and some very fine screenplays)... and now WARWICK COLLINS has had another new idea

In ritardo!!! It was never going to be easy – as fellow 'rotator' owner Ian Oatley is finding out in Sydney – but the 42ft fully revolving keel lake racer Stravaganza designed by Jo Richards has now finally sailed... albeit quite briefly.

Two deep carbon boards, canted slightly outwards, provide lateral lift, while the fin and bulb 'assemblage' is rotated using a system of internal tracks and tackles; the build accuracy was quite critical... 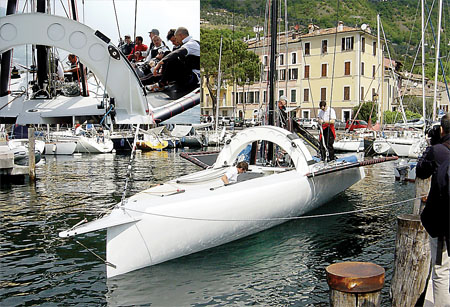