Update
MARK REYNOLDS enters the coach-boat debate, TERRY HUTCHINSON gets a day off, ANDY HEMMINGS is stuck in traffic, (more) changes pay off for Bella, lack of wind but not boats in Croatia. Plus SPITHILL ‘the younger’

Paul Cayard
And keeping it all intact is going to be huge...

Tailor-made performance
Now even your cordage can be custom made...

Design – Goin’ commercial
Since we last visited a couple of years back there has been significant progress at Harbor Wing, as MARK OTT and GINO MORRELLI explain

Sailor of the Month
Two big contributors... on and off the water

Below: the mighty Chimp, Mike Kershaw’s Half Tonner was pipped to Class 4 honours at the 2011 UK IRC nationals by Adam Gosling’s Corby 30 Yes! Remarkably, the little Chimp also has a solo transatlantic on its record, with former (heroic) skipper Richard Hatton in the 2005 Ostar... In a windy series the new Ker 40 Keronimo also shone brightly, losing a good shot at winning Class 1 only after a big face-plant on one particularly wild downwind leg 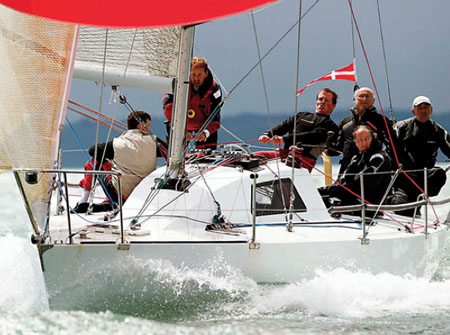