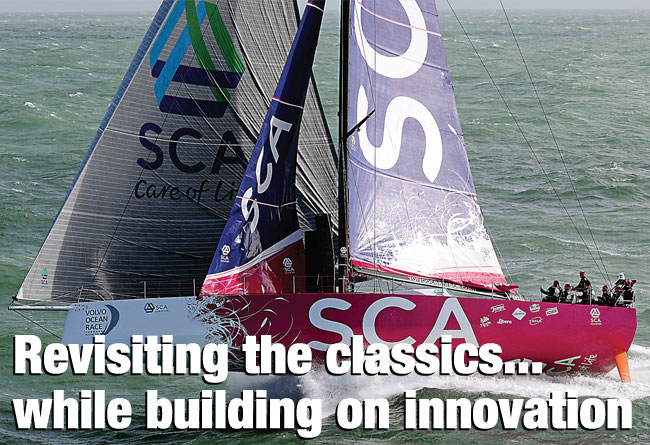 T he course for the next edition of the Volvo Ocean Race strikes the perfect balance between tradition and modernity. With stopovers such as Cape Town, Auckland and Newport, the race makes the most of historical roots and sailing icons, while capitalising on its recent innovations by giving sponsors the exposure they desire in promising emerging markets.

Alicante – Cape Town: 6,487nm
2014 will mark the third Alicante start for the Volvo Ocean Race, and once more the teams will have to cope with the instability of autumn Mediterranean weather; that said, a first leg start three weeks earlier than last time (11 October) should help to some extent. Tactically, coastal effects can make the opening of this game rather tricky while getting to Gibraltar among the leaders is essential to tackling the Atlantic descent from a position of strength. As for the Strait itself, it can be a real struggle with the breeze on the nose, since traffic is dense and the sea state can be very tough on the boats. But lack of wind is not to be ruled out either at this stage, and a regroup of the fleet can also happen.

Once out of the Med comes the first big strategic call: west or south in the race to the trade winds… and where will the best gap be to spend the least time possible in the Doldrums? Despite being a classic, this leg remains full of uncertainty since the St Helena High sits on the way, before which Fernando da Noronha has to be left to port. Then, as race meteorologist Gonzalo Infante points out, ‘The last 2,000 miles to Cape Town are usually windy’, so whoever deals with St Helena best will have a good chance of getting to Cape Town in first place.

Cape Town – Abu Dhabi: 6,125nm
From the South African port, a truly historic stopover for the Volvo Ocean Race, the navigators will need to make their way through strong southeasterlies, and try not to spend too much time suffering the effects of the Agulhas current. It is worth noting that light airs off the Cape of Good Hope can also force the crews to stay in close to the coast. Once in the Indian Ocean, a large zone of calms will probably have to be dealt with, and the goal will then be to get to the SE trades first, all of this with the menace of tropical storms. The final portion of leg two consists of a reach after a transition phase with light patches between two different wind systems: there again, big gains or losses can be witnessed, and racing in this area has proved tough on the nerves. Obviously a big leg for Team Abu Dhabi, who will wish to shine under the Gulf sun.

Abu Dhabi – Sanya: 4,670nm
As Ken Read noted previously, a Chinese stopover is crucial for many sponsors looking to make a name for themselves in this thriving market. But before the teams will be able to enjoy the warm welcome and enthusiasm of the public, as was seen during the last edition, there are many obstacles on the way: fickle winds in the Strait of Malacca, the incessant commercial traffic in the Singapore Channel and the famously bad sea state in the final approach. By then the complexities of rounding Cape Comorin and exiting Hormuz will be a distant memory. This third leg can easily turn into a chess game where the most adaptable and fastestreacting navigators will be rewarded.

Sanya – Auckland: 5,264nm
A deceptive leg which looks rather straightforward in terms of route when plotted on a chart. But strong winds can be expected in the Strait of Luzon, then the trade winds will dictate the approach to take, after which the miles sailed can quickly add up if a northerly route is chosen. As Infante recalls: ‘Last time Puma and Groupama went pretty close to Japan – which was a rather extreme option.’

The crews will have to face yet another Doldrums crossing near the Solomon Islands, with potentially significant tactical differences as the fleet re-enters the trades. Then as the finish draws near there will be an intense period of coastal racing – all followed avidly by New Zealand’s strong sailing community. The Auckland stopover definitely contributes to this edition’s strong essence of tradition; the city remains a boatbuilding stronghold that lives and breathes sailing.

Auckland – Itajaí: 6,776nm
Is everything decided once the words Cape Horn have been uttered? Obviously this leg is made up of legendary elements, and for many it remains the pinnacle of the event. But between the dangers brought about by ice in the south and the constant threat of tropical storms further north, it’s a fine line. Meanwhile, high speeds on furious seas will no doubt keep the media crews fully occupied.

The well-documented rounding of the Horn – after which, as Olivier de Kersauson once said, ‘You can stop fearing for your life’ – will be a key symbolic moment, but the course north along the coast of Brazil will allow little opportunity to relax.

Picking a path between wind holes and thunderstorms in this area has proved very demanding in the past (record chasers have sometimes felt desperate at this stage!) and changes in the leaderboard can be anticipated. Expect the navigators to get increasingly aggressive in the final few hundred miles. 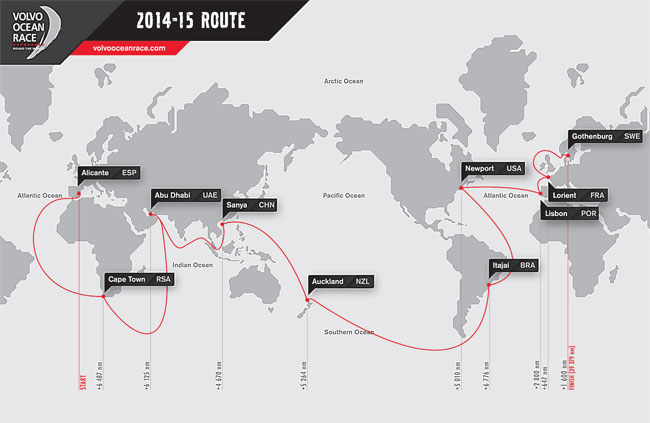 Itajaí – Newport: 5,010nm
Importantly, after Cape Town, Auckland and the Horn, the finish of this leg will add a new layer of historical significance to the event: for the first time in its 40-year history the Volvo Ocean Race will arrive in Newport and the sailing city is bound to put on a fabulous welcome. But to get there it will be a matter of constantly being open to tactical moves between west and east – inshore or offshore – as wind regime variations and influential warm currents play a big role. And, yes, crossing the Doldrums is once more on the road book, most likely after a bit of a drag race… which should prove rather close given the one-design nature of this edition. To wrap up, the big decision will be to know what degree of importance to give to the Gulf Stream, which in turns determines how far one ventures offshore.

Newport – Lisbon: 2,800nm
Who can mention Newport without thinking about those epic singlehanded transatlantic battles? But spring in the North Atlantic is not necessarily a pleasant affair for those tempted by a short route in the high latitudes! Clearly this leg will be a sprint across the ocean, so theoretically not a very complex leg strategically speaking… but the threat of light winds near the finish associated with the excitement of returning to European shores will mean that crews will push hard early on.

Meanwhile, the navigators know only too well that hard-won gains made out in the Atlantic can melt away if the transition to the Portuguese Trades is not negotiated efficiently – and we all remember the merciless battle that took place in the Tagus River last time around, just miles off the finish line with wind holes, localised puffs and strong current.

Lisbon – Lorient: 647nm Let’s not beat around the bush, Lorient absolutely loved the Volvo stopover in 2012, and not only because the city was welcoming home our conquering French Groupama skipper Franck Cammas. If in the 1990s La Trinité was Brittany’s racing mecca, Lorient has grown to become home to most of the big teams and now prob ably has the highest concentration of oceanracers per capita in Europe. Without an Azores waypoint this time, this leg with less than 650 miles to run is almost a formality… on paper of course, as the Bay of Biscay has two faces and can decide either to provide some serious action or to let matters drag on a bit.

Lorient – Gothenburg: 1,600nm As Jean-Yves Bernot once noted, ‘The Fifties can be furious in our neck of the woods too’, so heading north upon leaving Lorient, final leg or not, is not to be taken lightly. And even though these waters can hardly be referred to as unknown, their treacherous nature, notably above the British Isles, is a factor to be reckoned with. Not to mention commercial traffic and all sorts of static obstacles such as wind farms and oil rigs.

The final approach can deliver a few surprises and is most likely to be raced in light airs, but one certainty is that the spectators will give the next event the finish that it deserves.

As Knut Frostad reminds us, ‘Gothenburg is the home of Volvo. It is a city with a long history with this event and a lot of ties to it, after a fantastic stopover in 2002, and another spectacular finish in 2006 and now the finish in 2015. Gothenburg, midsummer, Sweden – everyone knows the race, everyone has a boat. It will be a fantastic finish.’