The second round of the AC45 World Series may have been in chilly England rather than sunny Cascais but the wind - and the show - more than made up for any drop in temperature. Andy Rice reports from Plymouth

After the first two America’s Cup World Series regattas, Cascais and Plymouth, the grand vision seems to be coming together very nicely.

Match racing in multihulls, for example. Anyone still care to argue the case against that one? With the Version 5 keelboats, remember how excited we all got when there was a lead change? In Cascais and Plymouth the lead changes have come thick and fast, not just in the fleet racing but in the match racing in particular. Yes, the traditional dial-up doesn’t exist any more, but the new game is to try to win your favoured side - and what a game it is proving to be.

Sport thrives on uncertainty, the possibility of the underdog sticking it to the favourite. Rarely did we experience that in Valencia 2007. But already in its short life Team Korea are establishing themselves as the giant killer. First it was Chris Draper’s defeat of Russell Coutts in their match race in Cascais. Then the former 49er world champion followed it up with another come-from-behind win against Coutts in Plymouth, having won one of the fleet races the day before. And just to prove that the Coutts defeat was no flash in the pan, the Korean crew took Artemis down 2-0, again in come-from-behind victories... 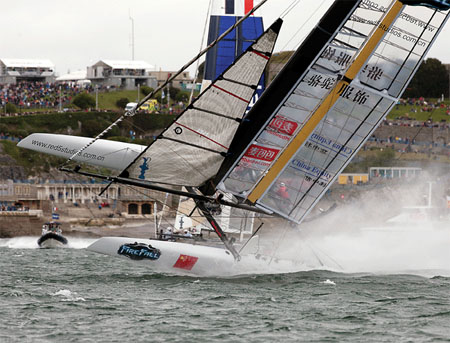