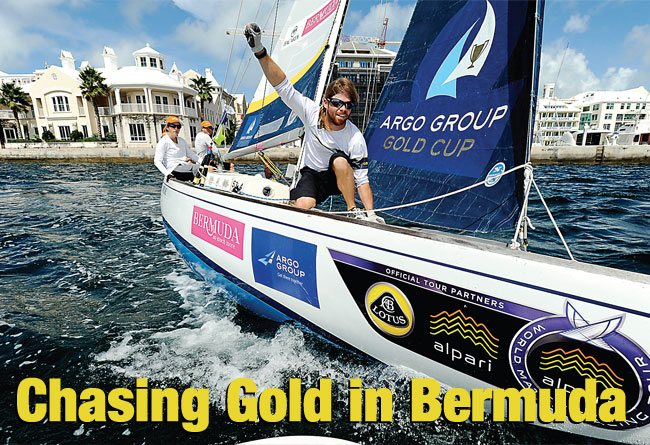 Will the whippersnappers’ role continue?

With four stages of the 2013 Alpari Wold Match Racing Tour (AWMRT) now complete, just 10 points separate the top four skippers on the Tour rankings as the series heads into its penultimate stage at the Argo Group Gold Cup in Bermuda from 7-13 October.

The Argo Group Gold Cup runs on a slightly different format from other Tour events with a 22-team format, as opposed to the 12 teams at the other Tour events. The field is split into two groups of 11 teams for the qualifying rounds with the top four from each group advancing to the quarter-finals.

All eight of the 2013 Tour Card Holder skippers will need to be on their game as they face a higher risk of early elimination with over half of each qualifying group being knocked out in the early stages of the event. 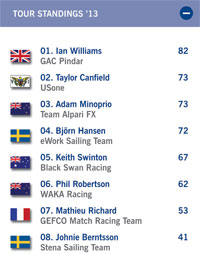 Defending Argo Group Gold Cup champion Taylor Canfield and his USone Sailing Team are heading to Bermuda fresh from their impressive win at the Chicago Match Cup which advanced Canfield to second place on the Tour rankings, just nine points behind current Tour leader Ian Williams of GAC Pindar. Canfield also recently elevated his world status to no1 on the ISAF World Match Race Rankings, placing him and his team in a confident position to extend their winning streak. Ian Williams and his GAC Pindar team are also looking to perform well in Bermuda as he chases his fifth ISAF Match Racing World Championship.

Fresh from the America’s Cup in San Francisco, four-time Olympic gold medallist Sir Ben Ainslie is returning to Bermuda with a renamed Team BART in honour of the Andrew Simpson Sailing Foundation. Winner of the Argo Group Gold Cup in 2009 and 2010, Ainslie has been busy sailing with Oracle Racing in its campaign for the 34th America’s Cup, but expressed his special affinity with the Gold Cup and its traditions.

‘We feel lucky because we love this venue,’ said Ainslie. ‘We like the boats and they are unusually challenging. We are returning this year to focus attention on the Andrew Simpson Sailing Foundation (ASSF) that has been established since Bart’s tragic death in San Francisco this year. The Ben Ainslie Racing Team, called BART, is racing in the Argo Group Gold Cup to raise awareness for this worthwhile cause in memory of our late friend and fellow sailor. Bart and the charity are the reason we are racing, as well as the reason we are getting the band back together…’

As one of the oldest match racing events in the world, the Argo Group Gold Cup never fails to deliver spectacular action in the heart of Hamilton Harbour with the skippers having to master the traditional designs of the IOD boats that are used for the event.

Follow all the action and live updates at www.wmrt.com. »