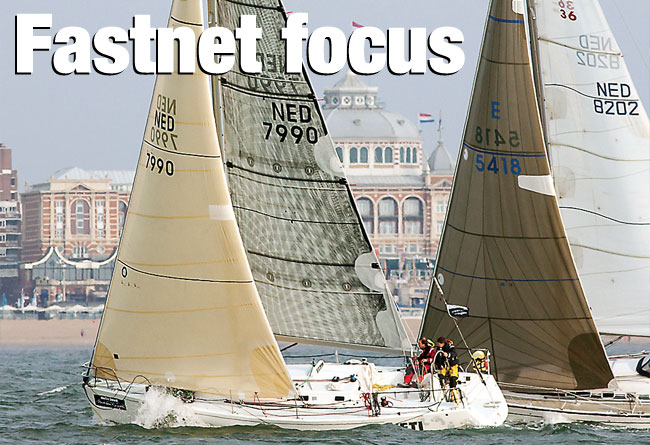 The Rolex Fastnet Race is often a light-wind affair. But as anyone who knows their Fastnet history is aware, the race of 1979 was very different indeed, while the 1985 edition was also no picnic with severe gales and driving rain for more than 80 per cent of the event’s duration. Quantum Germany’s Sven Krause, a veteran of ‘four and a half’ Fastnet races, recalls the ’85 event very well. ‘The “half” was in ’85 when we were caught in Force 10 winds; all our electrics were wiped out and we had to retire,’ he says. ‘We later found out we were just a few miles from where the Maxi yacht Drum had capsized in the same storm.’

Still, Krause’s four and a half Fastnets stand him in good stead for designing sails for those taking part in this summer’s 605-mile classic. ‘We have designed some new sails for a Swan 441 Racing version, Best Buddies. The owners, Kay and Susann Wrede, have put a lot of time and energy into getting as much speed out of her as they can. We have focused on sails that are fast and strong enough for a busy season.

‘The boat competes in Germany under ORCi, but the Fastnet is under IRC. The owners sat down with the designers at Judel- Vrolijk and worked out some different headsail areas to find out which set-up would be best for them. Now they are sailing with a 137% genoa instead of the original larger 150% sail. This allows proper sheeting angles and, with the new mainsail, gives them enough power across the range, as borne out by the fact they have been beating their main rivals on the Swan racing scene.’

The sails are constructed from Quantum’s Fusion M membrane technology. ‘Rather than building the sail on a shaped mould in 3D form,’ explains Krause, ‘we laminate the membrane sail in flat form on a workbench. This enables us to apply more pressure and direct heat and use a thermo-setting adhesive that achieves superior lamination. This means we are able to deliver a better laminate, which results in a longer-lasting product.

Fast horses for courses… Paul van der Pol’s J/109 Yeti (top) with her new Fusion M fully battened mainsail that has been specially developed with a slightly flatter shape for shorthanded use plus a very deep second storm reef. Below: the J/109 Rush at work in the USA with a Fusion M mainsail and jib 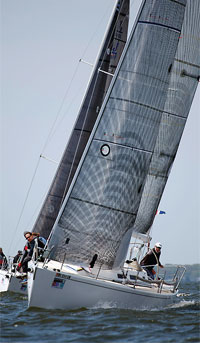 ‘Ultimately, we have more control over the result. Whenever you use a lamination process, the film will always shrink in an uncontrolled manner when you expose it to heat.

‘Fusion M comes in five or six sections which are laminated together to induce shape. We don’t have a one-piece membrane sail; the advantage of constructing it from sections is that the shrinkage has already taken place before we assemble the final sail. This makes it much easier to achieve the shape that the sail was designed to be.’

Bearing in mind that Best Buddies could well encounter another 55kt storm in this year’s Fastnet Race, Krause says an additional set of transverse yarns have been added in the horizontal plane, so the sails will stand up much better to any flogging and flexing. ‘This maybe adds a maximum of 10% of weight to an inshore layout, but the sails are still very light and the added structure will most likely add an extra season to the performance life of the sails,’ he adds.

Added durability for shorthanded racing
For Yeti, a J/109 entering the Fastnet, sail durability is perhaps even more important. Owner Paul van der Pol is taking on the Fastnet doublehanded, and so for long periods of the race there will only be one person on deck. Nic Bol, owner of Quantum Nederland, has been working closely with van der Pol on developing a set of sails suitable for such a specialised purpose.

‘We have built a fully battened main for Yeti, with Fusion M plus single-sided taffeta for durability,’ says Bol. ‘When it’s blowing hard, or maybe while you’re putting a reef in, the sail is flogging badly, but the full-length battens really help to stabilise the sail.’

Paul experienced this in a recent shorthanded race when he moved ahead of another J/109 whose sail was flogging away for the better part of an hour. ‘There is no rating penalty either for full battens, so it’s a no-brainer really.’

Bearing in mind that there will be no weight on the rail compared with a fully crewed J/109, the mainsail was designed to be flatter than standard, and two reefs were added, the second reefing point being a deep reef in case Yeti encounters more fierce conditions during this year’s big race.