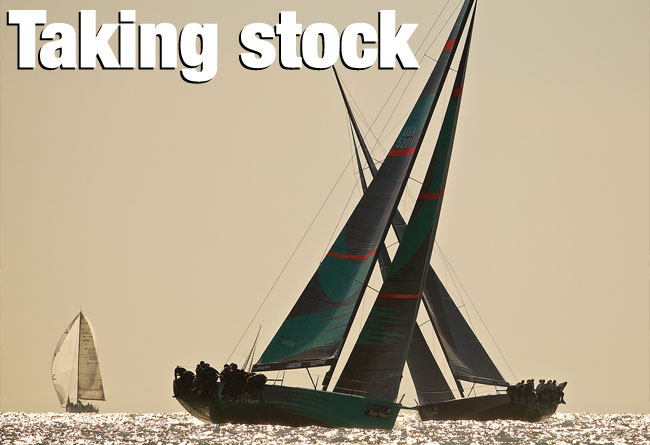 Super Series class manager Rob Weiland has built a healthy career through staying in close touch with his customers...

I am trying to fathom the enormous amount of work that ORC has now put into updating their VPP and the services on their website, with its formidable log-in Sailor Services section giving access to a database with some 61,000 measurement records, copies of certificates and the ability to run test certificates at will. Next step will be offering the content in a number of different languages, starting with Italian, Spanish, Croatian, Greek, Portuguese and Brazilian.

There is no doubt that this organisation currently has the most sophisticated tools in place to rate a boat’s performance potential and to score its performance. ORC now offers more access to information on competitors’ boats and options to optimise your own boat by running test certificates than any other rule in the world. Slowly this is starting to be reflected in the growth in interest in what the ORC has on offer. Even their promotion, at least from the outside, now seems to have moved forward from where the product was expected to sell itself, with active user-oriented promotion of the various dishes on the ORC menu.

The ORC also has a long reputation of chasing its VPP tail at the owners’ expense. Their yearly rating tombola is entertaining, but only if you do not own a boat, or design or build them. And 2013 is no exception. Finally the old patchwork VPP, the result of decades of fixing plumbing leaks, has been replaced by a shiny new model. Resulting in major rating changes between different types of boat; possibly for all the right reasons, but leaving little confidence in future rule stability.

No doubt the new VPP is the best in the business, but a) does it promote (typeform towards) a boat that we like to race (the claim that ORC is not typeforming is of course both false and not encouraging if you plan to have a boat built) and b) if it does, do the administrators have the honest intention to balance longterm stability with VPP improvement?

To date this has never been the case at the ORC. The result is that hardly anybody dares to build a racing boat to ‘the best rating rule in the world’. The parentheses will remain in place until confidence is earned.

The ORC developments put the RORC under some pressure. Traditionally closer to the racing owner and stronger in marketing as well as in understanding the market, based on its heritage, longstanding relations with other leading yacht clubs, and organising high level events, the RORC now looks a bit lost when it comes to its handicap rule activities. My personal view is that their flagship product, IRC, is beginning to lose its shine.

The product and the way it is administered has not changed for the worse, but possibly it has failed to stay in tune with changing demand or failed to recognise that even the best products need to be regularly refreshed? It seems the clients slowly but increasingly feel the need to move on. The spread of high-level events that sport IRC as their (primary) rating system is still considerable, but to me it now looks to have peaked. Any decline is masked by some events now scoring under two or even more systems, but that in itself shows that things are on the move. But there is still more interest in building new boats to the IRC rule than there is to ORC. Trust is hard to gain.

I feel that in the back of their minds the most connected officers and administrators, at both RORC and ORC, were already picking up on these sentiments a few years ago. An attempt was made to streamline ORC and RORC interests to ultimately perhaps deliver one rating system and ideally to work together at administrating the rules. To combine the best of both worlds. From day one this effort really did not have much of a chance as insufficient internal support was mobilised at both ends. If anything it has led us in the opposite direction to what was intended.

At a technical level there is more ongoing contact. In combination with US Sailing the Universal Measurement Form (UMF) has been developed. This basically is a sum of all the measurements required by IRC, ORR, ORC and PHRF. It is promoted as a breakthrough. To me it seems this development underlines that nobody has a clue any more how to promote yacht racing… Surely the aim cannot be that every boat should have two or three certificates and score for two or three trophies for one start, just because those in charge cannot agree on anything!

UMF only works if you get all the measurements done that are on the form, at great expense and for most boats of little or no use. Besides, some of these measurements are plain silly; they are certainly unrepeatable, like the overhangs in IRC or stability in ORC. Some are hard or even impossible to check, hence open to abuse, certainly in top-level international racing.

Hull shape and geometry, inclination measurement, the tools have improved but there is nothing like the accuracy that is being claimed, nor the control on improper measurement practices… let alone deliberate cheating. Of course the form itself cannot be blamed for impracticability and a false sense of accuracy.

A Universal Measurement System might be a step too far but it should be possible to agree on how to measure the important components, like sails. Right now the formulas for calculating sail area are different under the various rules. And they continue to use their own abbreviations and terms, as if the ISAF Equipment Rules of Sailing (ERS) were not in place. So you race ORC and your jib has a different calculated area than when you are scored under IRC, or a different optimum shape.

Of course you will optimise for each of these rules if you are even half-dedicated… So, at least at the top level, you will race with different sails for ORC and IRC. But, no, we are not typeforming!

I would say that the time for a secret rule for international high-level racing is over. Transparency is the way of the future. Then the misconceptions, mistakes and inaccuracies are there for all to see.

For high-level racing, with custom-built boats to one-off designs, rule stability and trust in both the rule and the regatta management are a must. Rule stability and quality of racing have to be given priority over scientific nitpicking and politics. Strong management has to keep all the players in balance, involved and interested. And that works only if the competitors and organisers feel responsible for the product and have the opportunity to voice opinions in an organised manner. To really merge and break down some of the walls of tradition might require new faces in key places. Who is up for pulling the rabbit out of the hat?

If you feel this all has little to do with the TP52 class and the 52 Super Series, just step into my shoes for a few months and try to discuss with owners how to race, what to race, what to expect for rule and event development, what to buy, what to build…

We have been streamlining the 52s within IRC for five years now. It has saved the owners tons of money and produced better racing at a wider range of events, as well as supporting a relatively healthy secondhand market for boats. With the changing landscape we are now looking into streamlining with ORC and HPR. Because it is silly to waste buckets of money on optimising between races scored under different systems – and we feel that there is not going to be one international rule in the immediate future nor proper streamlining of IRC and ORC.

We continue to improve the 52 on the basis of research and the daily experience of racing and refining what is almost certainly one of the most optimised classes in the history of sailboat racing. At the same time we continue to plead from every available platform to give international yacht racing direction.

The first 52 Super Series event in the Med this year will be the Trofeo Conde de Godó, in co-operation with the Real Club Nautico Barcelona. Perhaps I will see you there?