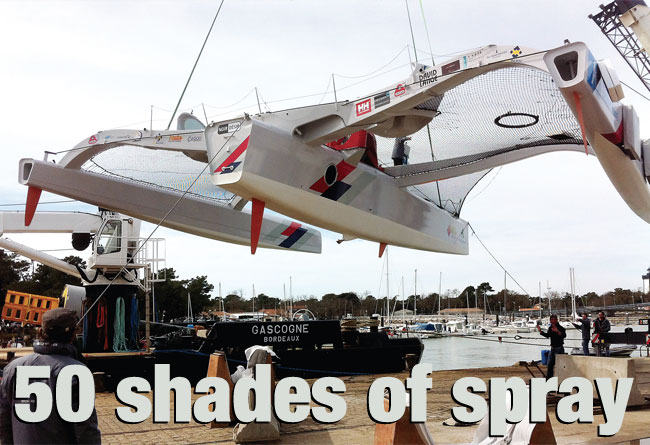 When Romaric Neyhousser was asked by Lalou Roucayrol to design him a new 50-foot trimaran, he drew in his friends Guillaume Verdier and Benjamin Muyl who had had a successful experience with Yves Le Blévec’s Actual. ‘So it’s been a family affair,’ says Neyhousser. Roucayrol’s sharp-looking new tri now has her sights set on classics like the Transat Jacques Vabre and the next Route du Rhum…

I t was a quiet, low-key affair but the sun was out, quite an event in itself this March. Lalou Roucayrol’s new 50ft trimaran was launched in Port-Médoc, where final assembly took place after the main build phase at Thierry Eluere’s facility, in a ‘casual, friendly and pleasant manner’, says designer Guillaume Verdier. ‘It makes such a difference when a build is carried out in a positive atmosphere, without any tension. You feel the boat gets a good start when everyone’s happy to work towards her completion together.’ And when she gets to hit the water on a glorious day in the middle of a notoriously horrid ‘springter’, even the fiercest of rationalists could be tempted to think that good fairies have been at work over that baby’s cradle.

But maybe this strange karmic take on things also has a bit to do with the fact that Roucayrol hasn’t had the smoothest of rides himself. The new boat could then simply be the sign that things are looking up… Both for the man and for a multihull scene that not everyone has finished mourning for quite yet.

When Lalou was appointed skipper of the Lombard-designed Banque Populaire Orma 60, just before the 2000 Europe 1 New Man Star race, one has to remember that he was replacing Francis Joyon, unceremoniously kicked out due to suboptimal results at grand prix events (interestingly, Francis kept the old boat which led to a dispute with his former employer, but nevertheless managed to win the Transat despite a complete absence of both budget and any technical support).

Roucayrol eventually ended up suffering the same fate at the hands of the ‘bankers’, as they are sometimes referred to when a compliment is not on the cards, and so did his successor, Pascal Bidégorry… ousted because he was blamed for the maxi BP5’s slow start. All this is really just to say that Lalou has been ‘beneath the radar’ over the past decade, still managing to race but never quite having stepped back up a ladder that, incidentally, has itself gradually faded away.