Back in the 1960s the British Amateur Yacht Research Society (AYRS) publications edited by John Morwood provided the rest of us spread around the globe with the most up-to-date information available on developments in multihull sailing craft. A number of us who were sailing Malibu Outriggers at the time became enamoured with the development opportunities offered by the then IYRU’s new C-Class cats. We avidly followed British sailor Reg White’s exploits with his little group, first with Emma Hamilton and later on using their magnificent wing-masted C-Class Lady Helmsman, as in succession they trounced two Australian and three east coast USA challengers for the International Catamaran Challenge Trophy – already better known as the Little America’s Cup.

Since 1961 the eastern USA C-Class enthusiasts had been building their boats out of wood, during which time they had competed unsuccessfully for the trophy three times; now we on the west coast decided it was our turn to have a go. But right from the start we knew that we would be building our boats in composite.

My good friend Bob Noble, a resident of Costa Mesa, CA (at the time the world’s FRP/GRP boatbuilding mecca), was responsible for building the first FRP C-Class hulls in 1968 to a design by Bob Reese – who had previously designed the wildly successful D-Class cat Wildwind (the same hull design was used for Dave Bradley’s Whiplash, Steve Dashew’s Beowulf IV, Lee Griswold’s Taku, Alex Kozloff’s Aquarius I and II and others).

It didn’t take us long to work out that in the smaller C-Class it was best to put the entire allowed 300ft2 of sail area into one sail. Most of us started out using standard mast sections with triangular mainsail profiles; however, it is notable Bradley and his crew, Gary Marlotte, were already using a square-topped sail on their D-Class that was decades ahead of its time. When the Danes finally broke the British stranglehold on the ICCT in 1969 with the FRP-hulled Opus III, Lee Griswold ordered a set of the beautiful Danish Opus hulls for a new Taku II; now there were two players on the west coast C-Class scene.

Even after closely monitoring C-Class development in Europe, at this stage (1970-72) we were still giving remarkably little thought to the weight of our early platforms; we were convinced that daggerboards and rig configurations were much more critical to performance. That would soon change... 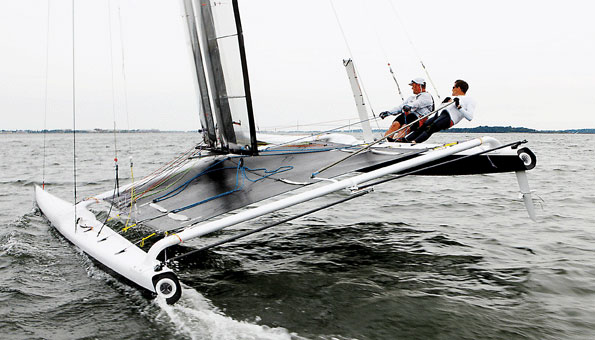