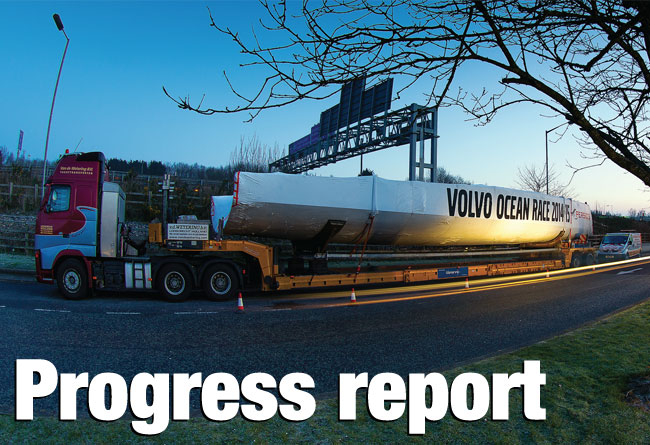 Above: nail-biting anticipation as the eagerly awaited hull and primary structure of the first Volvo Ocean 65 arrive at Green Marine in Southampton, ready then to be mated to the deck – from Multiplast – and then fitted out before a launch in June.

Britton Ward, Farr Yacht Design’s lead designer on the one-design Volvo Ocean 65 programme, looks ahead to the completion of boat no1

The past few months have seen a flurry of activity on both sides of the Atlantic. At Farr Yacht Design our team have been furiously producing construction drawings and details in Annapolis, Maryland while construction of all the tooling and components for the first boat are completed. As we write this the first hull with a significant amount of internal structure installed is on a truck making its journey north from Persico in Bergamo, Italy to Green Marine in Hythe, UK, and the lamination of the second hull is advancing.

Meanwhile, the deck of the first yacht, having had a full dry-fit of deck hardware, and complete with winch and structural supports, plus steering pedestals, is also on its way across the English Channel to Green Marine where final systems fit-out and assembly will take place over the coming months. Lamination of the second deck is well underway at Multiplast in Vannes, France. Manufacture of internal structural components is also ongoing at Décision in Ecublens, Switzerland, on schedule to be installed as the next hulls and decks are produced.

Machinery, electrical and hydraulic systems and their various penetrations have already been verified using the fullscale VO65 mock-up at Green Marine to ensure actual system installation will be as efficient and consistent as possible.

The first keel fin and bulb are in advanced stages of final machining while the first rigs are in an advanced state of construction at Southern Spars in New Zealand. Final designs for the pre-race sails are also all actively in the process of refinement. It’s all happening.

Alongside this the race organisation has been working to fine-tune the course of the 2014-15 event, putting in place agreements with ports and teams and refining the details of the Notice of Race and the numerous commercial agreements.

Under the leadership of Nick Bice significant planning for the new shared shore-support programme is underway. This is a new feature for this race but one that is critical to constraining the overall costs of the campaigns and ensuring the boats retain their one-design status throughout the race.

Designed for a broader appeal
The move to a one-design format is driven by the desire to significantly bring down costs, and to give teams more time to prepare a campaign, so that more teams will be on the startline of the next race. We have previously discussed [Seahorse, November 2012] how the choice to move to one-design has a multiplier effect on cost savings when you consider not just hardware and spares costs but also the logistic and personnel costs that comprise the larger part of the team budgets.

The Volvo Open 70s were widely regarded as the most physically demanding class of boats ever to compete in ocean racing and this placed a premium on selecting crews with exceptional athletic ability for the Volvo Ocean Race. While this serves to reinforce the formidable challenge that is the Volvo Ocean Race, it may also have discouraged some prospective teams from entering due to the perception that the VO70s were simply too demanding.

One of Farr Yacht Design’s many challenges in developing the VO65 was to incorporate features that would make the new boat more manageable for a broader demographic of sailors, without significantly impacting the performance that this market demands.

At the broadest level FYD has improved the manageability of the boat by addressing key factors including:

Global parameters
While the VO65 is a one-design, it is still a grand prix racing yacht, capable of breathtaking speeds and engineered and built to be pushed to the limits in the toughest conditions on earth. Although marginally heavier for its length than the VO70 it is still a very light-displacement yacht with a powerful sailplan and the high stability afforded by the canting keel.

We have worked very hard to balance the boat’s parameters in an attempt to limit the performance impact of safetyrelated weight gains. We’ve also worked hard to creatively add relatively inexpensive features to enhance the boat’s handling and performance, such as increased keel draft, the inclined keel pin axis and water-ballast trimming tanks. Compared to a VO70 the boat is smaller with less sail area and stability, all of which will serve to reduce high loads in key areas, making the VO65 less physically demanding.

Crew protection
Crew safety is a core value of the Volvo Ocean Race and the VO65 incorporates a number of features with the objective of improving crew protection. FYD’s Volvo 70 designs have been at the forefront of water-management developments through clever cabin and cockpit geometries. On this project the dangerous waterflow over the bow has been addressed by having a relatively high sheer line forward (similar freeboards to a VO70 despite being a smaller boat), a hard sheer corner and fullwidth cabin geometry.

High-speed longitudinal water ingress into the cockpit will be reduced by having the relatively taller cabin extend athwartships all the way to the sail stack. The cabin itself is tall enough and broad enough in its shoulders to provide substantially better protection than the VO70s.

Sail inventory
The sailplan inherits the best concepts from the VO70s while simplifying the rig as much as possible. Unlike on the VO70, the rig’s chainplate base spans the entire width of the new boat. Beyond simplifying boat construction, the increased chainplate width lightens the basic rigging components.

Masthead and fractional code 0s are flown from the bowsprit, as well as an allpurpose masthead furling A3/A5 for broad reaching and running. 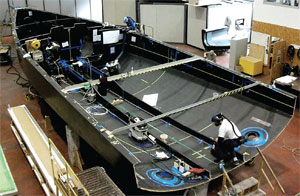 Above: rewind a couple of weeks and this was the same hull at Persico in northern Italy with the longitudinals, mast and keel bulkheads already in place. Note the flange to which the deck will be bonded

Control of stackable gear and equipment
One of the most demanding tasks on the VO70s is the shifting of the gear and sail stacks with each manoeuvre. The VO65 addresses this directly by reducing the number of sails carried and decreasing the size of the sail stack on deck. The over - lapping upwind headsail and a small, specialised staysail have been removed from the inventory, while all the storm sails are now sealed in place down below. The combination of the smaller physical sail area and reduced sail inventory brings the total weight of sails to be stacked down by the order of 30-35 per cent.

Meanwhile, the addition of forward centreline and aft water-ballast wing tanks gives the sailors more ability to vary boat trim for given conditions and in some cases should mitigate the gains associated with aggressive sail and gear stacking.

But stacking and ideal gear placement will always provide some performance benefit, so a full review of which equipment items can be sealed in place is being undertaken. Controls to limit the amount of extra stackable weight are also being finalised. All these steps should help reduce the premium placed on exceptional physical strength.

Deck hardware
The expected winch loads are in the order of 10-15 per cent lower than a VO70. Despite the reduced loading, the winch package is similar in size and gearing to the VO70. Three grinding pedestals have been retained, specifically for hoisting and furling manoeuvres where they will be filled even in reduced crew scenarios. For more common manoeuvres a female team with higher crew numbers will be able to have more crew members actively grinding than on an all-male boat.

The winch drivetrain has been set up longitudinally to provide clear and unobstructed access to the twin companionways which will make moving sails onto or below deck more straightforward. The aft-most grinding pedestal has been placed behind the main traveller for high-speed reaching and running trim optimisation.

Mechanical advantage has been added wherever possible to provide a range of line speed/load possibilities for a wide audience of users. Additionally, the VO65 makes extensive use of hydraulic sailing controls including use of a rotary pump. This permits centralised management of the rig setup and provides a mechanism for implementing overload relief settings employing a natural fuse type solution.

Summary
We are tremendously proud of the effort made by our whole team here at FYD. The enormity of the task has never been more obvious than now. The challenges associated with supplying the four collaborating boatyards with information for a component build process, all in parallel, with a constant stream of evolving input and with several layers of third-party review, have been truly amazing.

That the project largely remains on schedule is a testament to the incredible desire and effort not only internally to FYD, but throughout the whole substantial team. Seeing the various components reach completion and eagerly awaiting the final assembly of boat 1 make this a very exciting time. Spring is upon us and so is the imminent arrival of the first Volvo Ocean 65.