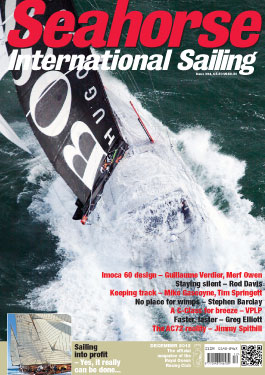 Case study
… While one of the designers trying to knock VERDIER off his perch, MERFYN OWEN, looks in detail at the background to his new Acciona

Can you afford not to… – Part 2
MIKE GASCOYNE expands on his rationale for toughening up offshore reliability, plus contextual framing from TIM SPRINGETT of McLaren F1

Update
TERRY HUTCHINSON and Artemis start to unlock the puzzle, Sun journalist BOB HARRIS sees a potentially bright future for sailing and it was all going so well for JIMMY SPITHILL…

Rod Davis
Sailing is just like any other sport in terms of the coach’s job… only it isn’t!

ORC column
Those sail designers are getting very testing…

Design – Downscale, upmarket
VPLP and HERVE DEVAUX have moved into the ephemeral world of the C-Class with Hydros