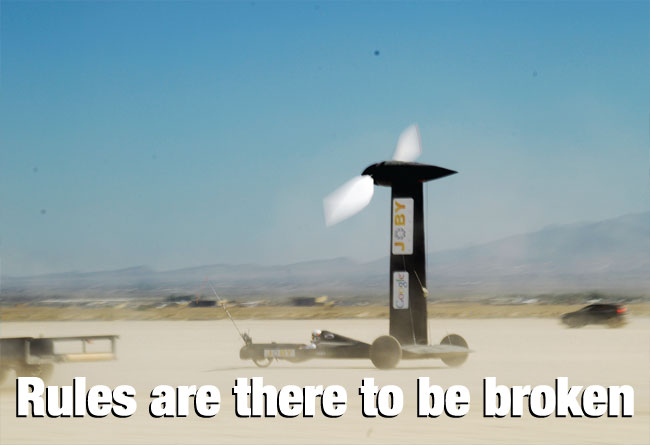 A couple of years back we saw how Rick Cavallaro was sailing directly downwind significantly faster than windspeed. Now he has achieved it again... but the other way

It all started out so innocently. I was asked by a friend whether a sailboat could tack downwind fast enough to beat a free-floating balloon to a point directly downwind. We both knew a sailboat could sail faster than the wind, but this was a new one on me. I drew up a quick vector analysis (page 41) and concluded that it should be theoretically possible. This struck me as surprising, and potentially the basis of a good brain-teaser.

As it happens, I should have known that ice-boats and land yachts have been routinely managing downwind VMG (velocity made good) much faster than windspeed for some time as, more recently, have an increasing number of high-performance sailboats.

Nevertheless, I got to thinking how I could fashion this as a good brain-teaser. If I could think of a way to make this principle work on a vehicle that goes directly downwind that should prove sufficiently brain bending.

Good enough in concept, but hardly a practical answer – and frankly a little too easy to believe. I had to think of a way to reduce this to a vehicle that someone could imagine building. It’s easy enough to imagine placing a propeller on a coarsely threaded rod to follow that same path; given the right propeller pitch, thread pitch and sufficiently high efficiency, this would go directly downwind faster than the wind (with the wind blowing along the threaded rod). But still not quite the answer to the puzzle I was trying to pose.