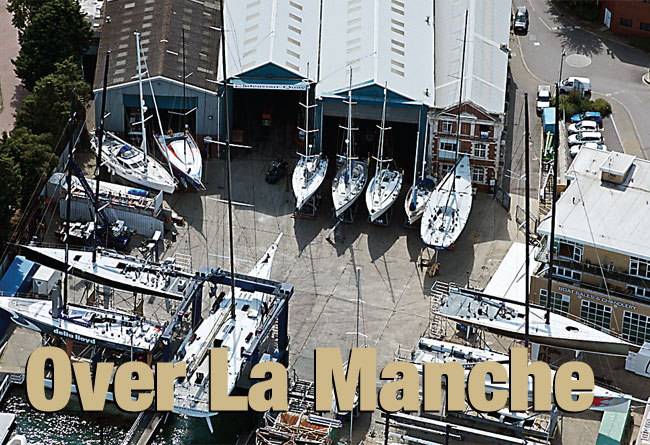 Like many other Seahorse readers I have been following the current Vendée Globe with an almost obsessive level of interest. As a competitor in the 2008/09 edition, I know that only the fastest sailors with the highest degree of seamanship skills can win. It’s also still evident that even though the winning boat will have been designed and engineered with painstaking care, and built with incredible expertise and dedication, it can never be anywhere near ready for an event as gruelling as the Vendée Globe, ‘straight out of the box’.

From initial launching each boat will have been in a perpetual cycle of testing, development and refinement, both in terms of performance and reliability. So clearly the quality and dedication of the technical shore team are critical in this preparatory phase, as is the choice of technical base and boatyard for the project. There is a multiplicity of factors to be accounted for in deciding on that base.

In France the benchmark locations, where most of the top Vendée entries have traditionally been prepared, are Lorient, Port La Fôret and La Trinité. In the UK, perhaps surprisingly to some, the epicentre for Imoca 60 teams has been Gosport, at the western entrance of Portsmouth Harbour. Endeavour Quay in Gosport has been the boatyard of choice for many teams including Alex Thomson Racing, Dee Caffari Racing and my own 08/09 Vendée Pindar campaign.

Endeavour Quay is now the principal facility in Gosport and no fewer than nine Imoca teams have used the yard for recent refits. Four Volvo Ocean Race teams have also operated short-term bases there, as have high-profile private visitors including Rán, Rambler, Alegre, Beau Geste and of course the classic J Class.

I know Lorient and Gosport well. I have spent long stints in Lorient with both the maxi trimaran Banque Populaire V and our MOD 70 Oman Sail, so they bear interesting comparison. Both are former military towns forging a new identity and developing a more mixed economy, with marine businesses and sailing teams playing an increasingly important part. And they each have singular advantages, in their respective areas, for big boats.

Both ports enjoy all-weather and all-tide access, and both have well-protected docks. Similarly, they both have rapid access to open water for testing and large islands protecting their entrances – Isle de Groix and the Isle of Wight – so flat-water testing is possible almost every day of the year.

Although one could argue that the food is more interesting in Lorient... it’s also true that Gosport has benefits that its French cousin does not. It’s very close to the central Solent, where most of the major races start in the UK, and it’s only 90 minutes from London, which is important for corporate hospitality, a crucial element of every modern-day commercial campaign.

A growing number of marine trades and services also now base themselves in and around Gosport, but one cornerstone facility, Endeavour Quay, originally the Camper and Nicholsons yard, has been there since 1782. And with a satisfying closing of the circle, the same yard that built many of the most iconic J boats of the 1930s, including Velsheda, Shamrock and Endeavour, now plays host to them again some 80 years later.

However, today Endeavour Quay is a bustling and thoroughly contemporary place… more than 200 years after its inception. At any time you will find an impressive array of raceboats in a fully modernised yard, still as relevant as ever, with the unique advantages of the site itself plus the energy and experience of a great team led by Boatyard Manager Tim Newell.

Tim’s professional team is flexible, helpful and experienced – particularly when it comes to moving around our large and rather precious pieces of hardware. Another important feature is that Endeavour Quay operates an Open Yard Policy allowing outside contractors to work on-site. Tim’s finger on the pulse also extends to the surrounding area, from where he frequently conjures up contacts for anything a team might require, from unusual heavy plant to crew accommodation.

Meanwhile, the yard itself provides deep-water mooring, undercover storage, complementary wi fi throughout and a travel lift that can take boats as big as Rambler 100 and Velsheda… Recent upgrades also mean that the facility’s on-site mast crane can now comfortably handle spars of up to 34m.

The 2011 Fastnet Race saw many racing teams based at the yard, bringing in numerous containers and other large items of equipment. It’s a great location for regatta preparation; the J boat Rainbow was also based at Endeavour Quay for much of last summer for its regatta programme. And 2013 being another Fastnet year, Endeavour Quay will again be hosting projects from all over the world preparing for this ocean racing classic.

As Stewart Hosford, head of 5 West, and running the wellestablished Hugo Boss Imoca campaign, puts it, ‘The bases, the suppliers and the networks that exist in Gosport are part of the reason we are here. The machine shops, the rope and rigging guys and the transport links are all part of it; but Endeavour Quay plays a really significant role. We have done the majority of our refits here for the past 10 years since we became an Imoca team. The facility and the guys working here are an important part of who we are… and why we are successful.’