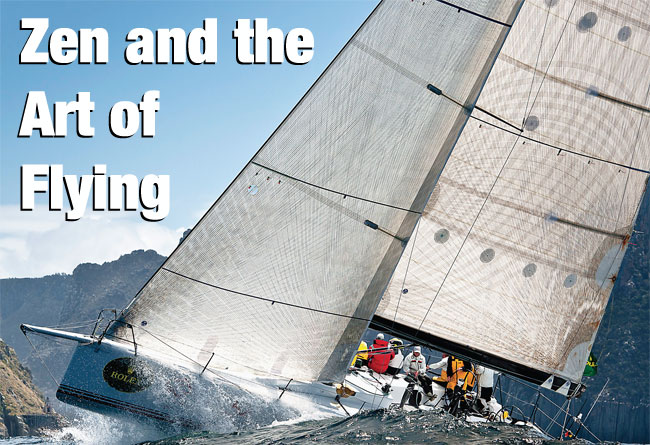 Top-level yacht racing appears to be literally lifting away from the element to which it was until recently firmly stuck. As more hull volume rises above the water so boats go faster and faster. This evolution takes the fish directly from the water to the sky, without wasting any time on land – other than for construction and storage.

I believe Grant Dalton when he says that it was by accident that Emirates Team New Zealand stumbled on the ability to foil. Not all accident of course, the potential to foil was never far away and for sure they knew what to look for; but to foil with such ease and balance at the first attempt required a combination of intuition and creativity beyond what is rational.

Dalton is definitely no romantic, banking upon the irrational as a good source for boat design. From what looks to be mostly chaos, the upcoming America’s Cup has produced a craft that catches the imagination. And other teams with more resources still seem far from getting it right. Cynics might say it is logical the Kiwis are a step ahead… to them the flightless bird is familiar territory.

Kiteboarding is another attempt to fly that has a mystery quality – and therefore the potential to appeal to every living soul. This potential has been recognised by many including ISAF, albeit initially in a rather clumsy manner.

But it can be argued that governing bodies are about technical control, the rational, with little eye for the romantic. Kiteboarding was probably gifted the Olympic shield too quickly, but it created the buzz that now and then we all need. Taking it away again was more the ISAF we expect to see, the body that you love to hate! But it will not hurt kiteboarding, it has too much potential.

Monohull racing yachts are getting nearer to lift-off as well. Watch the amazing averages of the leading boats in the Vendée Globe. That a major contributor to these great speeds is much improved autopilot quality is a bit sobering… bad for Zen addicts. Speed is certainly not essential to defying gravity, but current opinion is that modern racing craft need to be fast to inspire. Modern times require more spectacular failure and more frequent drama.

Risk of total failure, as in a boat fragmenting like Oracle’s AC72, one typically associates with the young and daring on a small craft that is easily put back together, or with a larger craft funded by a sponsor who measures return only in terms of publicity. This is not a criterion for private owners of million-dollar craft. 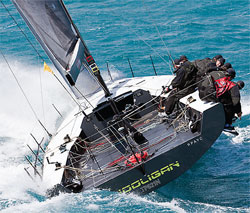 By contrast our next 52 Super Series, featuring six events in Key West, Miami, Barcelona, Ibiza, Palma and Porto Cervo, is based upon close racing between the most perfect of ‘traditional’ monohulls at multiple-race events hosted by some of the world’s greatest yacht clubs. We firmly believe there is a market for this activity.

And the Super Series is attracting increasing attention; 2013 sees an increase of around 30 per cent in the number of teams, along with growing praise from owners, sailors and sailing fans. Some try to ignore the fact that we have just completed our first year and draw comparison with the ‘old days’. But really there is only one way… forward.

Forward offers many options. One is to mimic others in the search for competitors and attention. Pro events like the America’s Cup, Volvo and Extreme Series all struggle if measured by the number of competitors. Less professional events for substantially smaller boats fare better. As do events that focus largely on having a good time, the after-sail.

The logic is that it is lonely at the top and less lonely lower down, but this is hard to accept. At regular intervals the box rule concept – used in the Super Series – is also questioned, the type of boat it produces is questioned, the event structure and marketing are questioned. And costs… they are always questioned. The grass is often greener on the other side, but to hop over a fence is another matter. So far we have been careful to only move our fences in those directions supported by our class members, through evolution. Those who pay the bills rarely preach revolution.

The America’s Cup chose to go multihull, Volvo chose to go for less boat and one-design: revolution. Time will tell, but the first signs – especially in the Cup – are not encouraging. Most others, classes or events, are in no position to choose. They hang on to what is there.

The TP52 Class has a tradition of boat evolution based on member consent. The best compromise seems a good choice. A current question for the members is whether a more spectacular approach will help the class and the 52 Super Series to grow?

For marketeers this might be the obvious choice. Heart-stopping action sells well in sport. Burning bridges, however, and crash-bang sailing other than slamming into big waves require a change of attitude. Sailing never has been without risk, but it always has been about seamanship and getting home in one piece. Crash-bang probably suits pro circuits and paid-driver sports better than owner-driver competitions.

Monohulls get closer and closer to flying. Canting keels are already established, though mostly still attached to a relatively traditional hullshape. But new concepts like Murnikov’s Speed- Dream are appearing. It will only take the right mix of technology, funding and imagination.

But to think that it only requires a boat that goes fast to attract sailors and fans is too simplistic. First of all, no matter how extravagant the revolution, the novelty soon wears off. Secondly, it is very expensive to have a revolution every five years or so… financial reality quickly catches up. Thirdly, the boat is just one part of the magic. An important tool, but still a tool.

And for sure there are other reasons to be interested in a TP52. The most common is that it is a versatile craft that can be raced to great effect in most if not all inshore and offshore arenas, under class rule, IRC, ORC, PHRF or HPR. Also, never underestimate the attraction of tinkering with boats. Planning a new boat, upgrading an existing boat, optimisation, some enjoy this more than sailing itself.

The 52 Super Series for sure is about quality. That indefinable mix of love of sailing, rational choices and hard work. We have just taken off in 2013 and hope you enjoy the flight.