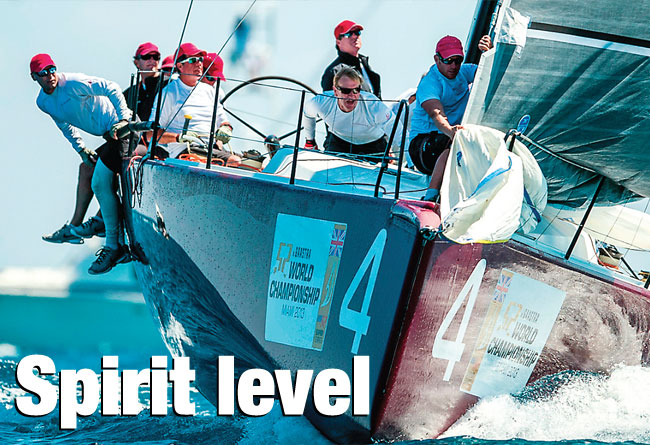 Just returned from the Palma Vela and our first 52 Super Series event in the Med is coming up quickly now. Barcelona, Trofeo Conde de Godó. Seven teams are getting ready for that, the six that we started off the year with in Key West plus the Turkish TP52 Provezza, owned by Ergin Imre, with 470 Olympic medallist Nick Rogers at the helm and Tony Rey on tactics.

Our class measurer Pablo Ferrer will have weighed and checked each boat before the event. Also, so-called trim points will have been measured for distance to the water in measurement trim. These predefined points give us a quick and reliable reference to check displacement and trim. Good rules should be easy to check – it’s not much use having rules that you cannot police.

Typically we try to weigh our boats at least twice a year and rigs at least once, plus we take the VCG of the rig. Sails are checked randomly during events – each race day about five to 10 sails are taken off and measured. Pablo is also out on the water during racing, checking that the sails hoisted have the buttons they should have and that sail limit bands are respected. He also hops onboard boats between races to check the inventory and positioning of heavy items.

I like to think that we deliver fair racing in our class – and there are two aspects to that. Firstly, you should not invite problems by having measurements that are tempting to play with or that are hard to check for conformity. Second, you should be prepared to check daily as well as be alert for things ‘that do not feel right’. In a small society like the 52 Super Series there is also quite a bit of social control; you rarely carry out any work on a boat without someone knowledgeable watching you. That helps keep things in line.

Hardly anybody is aware of all the rules that govern yacht racing, but that is not usually a problem. It is perfectly possible to race a boat without ever having read the Racing Rules of Sailing, on the basis of having crewed for a couple of years and learnt how to race by doing it. I would suggest the large majority of racing yacht crew haven’t read the complete RRS for a while… if ever.

My experience is also that those who are fully aware of every twist and turn of the RRS turn into rather average readers when it comes to other rules, like the Offshore Safety Regulations, class rules and Equipment Rules of Sailing. And please don’t mention the ISAF Regulations! You must be bored stiff to get anywhere near those.

And there are more rules. Depending on where you race there will be local variations on safety rules, local regulations and then a whole lot more if you race under a handicap rule. Between Pablo and me, our umpires and Maria Torrija, our race officer, we manage to stay up to speed with most of it. Although the sail designers still come up with ‘interpretations’ that lead to some heavy chewing.

Normally there are no referees or umpires in yacht racing. The guiding principle is that observance of the sailing rules relies on the obedience and honesty of the competitors. For the 52 Super Series we aim to have six umpires spread over three RIBs at each event. It is an experienced team. Our chief umpire Miguel Allen heads off to the AC after Barcelona, leaving us in the capable hands of Bill O’Hara.

Other MedCup and 52 Super Series longstanding faithfuls are Andrez Perez, Sofia Truchanowicz and Manuel Santos e Silva. They are not just the police but are also very helpful when it comes to writing the event’s NOR, sailing instructions or new class rules. They know so many people at the clubs that wherever we go it helps to smooth our journey. Working with ISAF Addendum Q has also made life more enjoyable for umpires and sailors.

The calls will not always be perfect, but I am sure that on average we have less drama on the water as there is less risktaking with the police watching closely. And it certainly is great not to have to listen to the lies in the jury room and waste time waiting for results. It is well worth the money for the boats and fuel.

Deliberately breaking rules, some prefer the term cheating, is always happening and at every level. From my own experience, spanning nearly 40 years, cheating was at its peak during the 1980s. At IOR events it was the norm rather than the exception that the measured displacement and the sailing displacement would differ. And not by a few kilos, but by hundreds of them.

Moving weight around when racing was and remains another favourite pastime. The simplest remedy is to permit it, but when I see the Volvo boats with their sails stacked on the weather rail I cannot help but feel uncomfortable. In the early 90s we saw One Tonners returning from a Solent race without a single top bunk in its original position. Loaded up with bottles of water the bunks simply ripped off their mountings when crashing about in waves.

In the US some famous names were nailed for cheating with weight and trim, like Williwaw and Acadia. But when the former UK boat Victory was remeasured in the US a whole new can of worms was opened up. The hull measurements were found to be badly off (by about 5cm at all the major depth stations), the errors accumulating to reduce the boat’s rating by rather a lot.

Victory’s stability went up by just over 13 per cent. Her previous Admiral’s Cup (1981) rating of 33.1ft jumped to 34.5ft. Unpleasant questions were asked about the measurement process, but as far as I know it never led to formal charges or changes.

Measuring equipment is neither easy to use nor is it straight - forward. It is hard to repeat any measurement and come to exactly the same figure. Equipment shrinks, expands… especially when you help it a little.

And you can help your luck a lot in an endless variety of ways. Most stick to simple methods with a proven track record. As if the simple ones, the ones that we all know about, are any less of a foul.

I hope when ‘my guys’ read this they do not chuckle too much. We are again going to try to produce the level playing field that the 52 Super Series claims to deliver. So that the winner gets his name on a real trophy. One of the best trophies to have your name inscribed on.