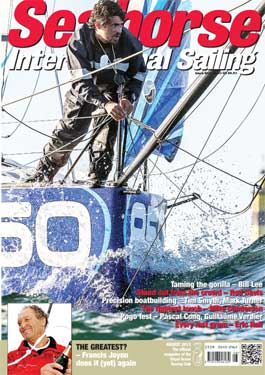 Gravitating eastward
ROB WEILAND is starting to look to the Adriatic

Building the wee beasties
Amid all the drama of the 34th America’s Cup, boatbuilders TIM SMYTH and MARK TURNER have been hitting both their weight targets and their deadlines with an incredible degree of professional rigour…

The wizard of Santa Cruz – Part II
How could you ever write a story about BILL LEE without looking at the mythical tales of Merlin...

Update
TERRY HUTCHINSON is glad to be back out there racing 52s, BILL LEE addresses ‘that’ gorilla in the room, RODNEY PATTISSON is cautious about ‘inshore’ attempts on ‘offshore’ records and NIKLAS ZENNSTROM goes for the treble…

Sailor of the Month
This one is going to be hard…