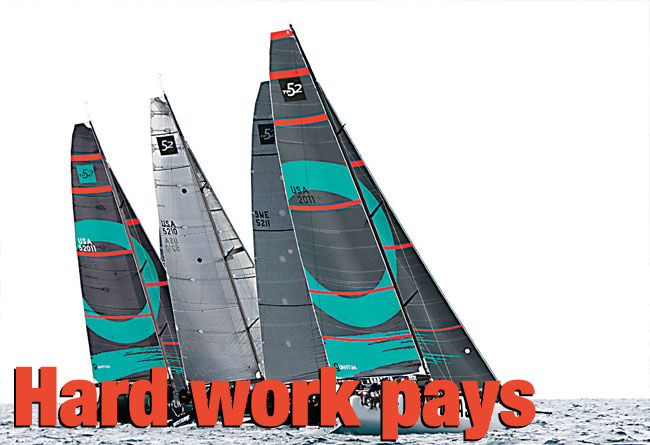 A number of existing TP52s have been modified to race under the IRC handicapping rule; but Austin Fragomen of Newport, RI, who purchased a 52 project started by the late Dick Oland of Canada, decided to see what could be done if the optimisation process began before the boat was launched. As it turns out, the TP52 known as Interlodge 3 has proved to be extremely successful on the IRC circuit.

Dr Robert Ranzenbach, a consultant working with Quantum Sails on the project, says the only initial constraint was the use of an existing female mould designed by Botín Partners from which a pair of TP52s had already been produced. ‘This would ultimately prove an excellent starting point as one of these original TP52s, Quantum Racing, would later go on to win the 2011 Audi MedCup Series,’ notes Ranzenbach.

Exploring options
According to David Flynn of Quantum Sails, hull shapes in the TP52 fleet had become optimised to the point where there was only limited further potential. ‘So rather than focusing on optimising hull shape, Botín Partners proposed a study to identify an alternative mainsail planform that might offer upwind performance advantages under the IRC rule,’ says Flynn.

Adolfo Carrau of Botín says: ‘With the Interlodge project we proposed departing from well-known sail plan dimensions to explore what would happen if we designed the boat with a taller rig and a mainsail with shorter girths. This would be a big challenge for Quantum but, having worked with them closely for six years, we had a high level of confidence in their design tools. On Quantum Racing they employ VSpars, which enables them to check the real flying shapes of the sails as they are sailing on the boat.’

Early-stage communication
Whereas in the vast majority of racing projects sails are designed once the boat is built, the Interlodge project brought Botín and Quantum together from the very beginning. ‘It’s critical to begin at this early stage,’ says Carrau. ‘When we design a new hull shape or set of appendages we need to know if sails can be designed to work in a way that will justify a more powerful hull form or new appendage sizing and position. At this level, where we’re searching for tiny gains in performance, it’s critical to have early dialogue with the sail designer.’

Top: with a taller spar and reduced mainsail girths the latest higher aspect sail plan on Interlodge (second left) can be clearly distinguished when compared with her TP52 rivals. Not only is the higher aspect rig more efficient, it also saves rating… 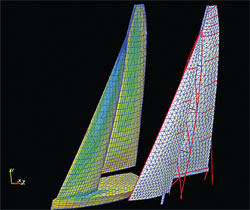 According to Flynn, creating this interaction between boat and sail designers is moving from the rare exception to the norm, certainly at grand prix level. ‘On almost every big project we’re beginning to interact with the boat designer on the front end.

‘More often now project managers are getting the sailmaker involved early to work with the mast maker to look at things like stiffness of the tube and discussing fundamentals with the boat designers. Even if the rig height has been settled, sometimes we look at the positioning of it in the boat. For example, how big should the foretriangle be relative to the boom length? That’s a question that we can help answer by providing better aero models for the designer.’

A double win solution
In the case of Interlodge the analysis identified a critical opportunity: build a mast 600mm taller than a standard TP52 rig and a taller mainsail with shorter girths. ‘Bottom line is we got a taller rig with a more efficient mainsail planform,’ says Flynn, ‘and the boat received a rating reduction! That’s what you can do if you have sophisticated computational tools. If you don’t have these kind of tools you really can’t play the game.’ For Interlodge the result is a boat that’s faster through the water and slower on handicap – a double win.

For larger yachts the benefits are even more significant, says Flynn. ‘The integrated aero forces acting on the boat are one aspect impacting performance, but the aerodynamic forces acting upon the sail also form the basis of the next step in sail design, which is to use finite element analysis and hang the sails on a rig. This gives you the means to accurately predict the loads and strains that will go through the sails.

‘We can then place the fibres in the sail with much greater confidence,’ explains Flynn. ‘Conservatively this allows us to save 10-20% of a sail’s weight without compromising strength or durability. And if you can take a couple of hundred kilos out of a superyacht rig then the designers are pretty happy because they can take much more weight out of the bulb to reduce drag!’

The success of the Interlodge optimisation project, adds Flynn, shows why there’s a new world order where designers, mast makers and sailmakers are working together at an increasingly integrated level from the very start of a project. The result: everybody wins.