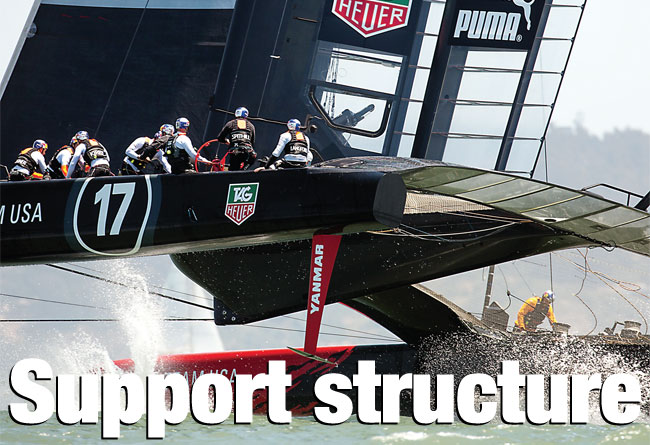 In the second part of our look at the prodigious output of Core Builders Composites in Warkworth, New Zealand, Ivor Wilkins talks to Tim Smyth and Paul Bieker about the creation of the elegant and highly loaded lift foils that are carrying virtually the entire mass of this year’s America’s Cup contenders

When the AC72 catamaran class was conceived for the 34th America’s Cup most of the initial attention went to the massive wing sails and the race was on to learn as much as possible about their design and development. Fairly quickly, however, it transpired that the real game-changer was going on under the water in the form of the daggerboards.

It was always understood that these boards would generate considerable lift, in effect reducing the displacement of the boat at speed. As originally drafted, the AC72 rule was intended to discourage full hydrofoiling and at least some of the early investigations headed in the opposite direction, looking to the windward foil to generate downforce and thus increase righting moment.

That line of thinking was quickly stamped out with a specific ruling against it – leaving the design groups to turn their attention to lift. And despite the rule’s discouragement in this regard, nothing is quite as seductive to an America’s Cup design team as an opportunity to beat the rule. If some lift was fast, more lift would surely be faster and total lift faster still. It wasn’t long before teams were experimenting with full foiling on smaller catamarans and once that genie was out of the bottle there was no going back. Every effort would be made to get the big cats up and out of the water.

In broad terms the foils have to present two different planes to the water: a horizontal plane to generate sufficient lift to levitate and support the seven-tonne structure in flight above the waves; and a vertical plane to limit leeway and provide directional stability through the water, all of which exerts considerable side force.