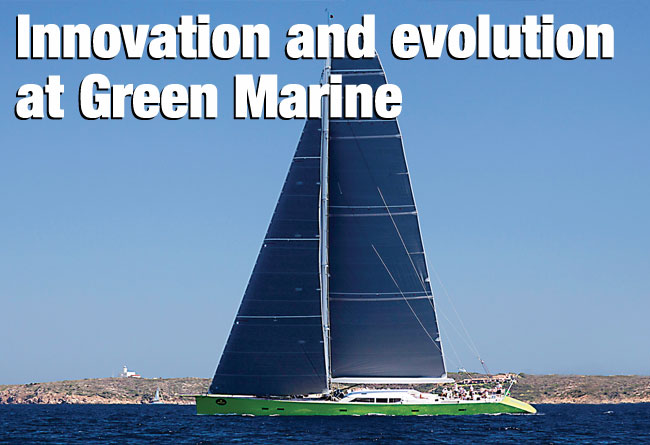 In the summer of 1983 a 43ft racing yacht called Panda took to the water and with her was launched a boatbuilding company that has since built 215 boats including seven Volvo racers, five America’s Cup contenders, seven TP52s and more than half the UK’s all-weather search-and-rescue fleet.

Back in 1983 epoxy and carbon were still regarded as exotic boatbuilding materials; expensive and difficult to use. The build of every boat was a challenge. There was an obvious and absolute need for the materials and processes to improve, and for boatbuilders to learn and innovate.

The development of such a culture is a powerful force; it has been the defining feature of Green Marine for 30 years and is the reason that we became and remain at the top of the racing yacht industry in 2013.

Epoxy resins and unidirectional carbon, Kevlar and S-glass were a huge step forward in the early 1980s, and the replacement of PVC foam by Nomex honeycomb was an equally big step for us in 1984. Honeycomb was tricky to use with wet lay-up, so the arrival of wet-pregs in 1985 was quite a relief. Over the following five years epoxy resins improved: working times lengthened from four to 48 hours and specialist adhesives took away the hit-and-miss operation we called core bonding. By the time ‘proper’ pre-preg was offered to us in 1989/90 we’d had more than enough of long working time epoxy hard eners which were proving to be both toxic and corrosive.

The marine industry was very much an after-thought for most materials suppliers, who had the much larger aerospace industry in their sights. In the 1990s we worked with every pre-preg manufacturer who would talk to us. Our challenge was to devise ways to use inherently unsuitable materials for the purpose of building ever lighter and faster racing boats. 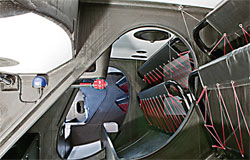 Main picture: Green Marine built the all-carbon hull and deck for the latest Briand-designed super - yacht Inouï, which was then completed and launched at Green’s parent company Vitters. Green Marine built the hull for François Gabart’s Vendée Globe winner Macif (above) and are also the prime contractor for the new VO65 one-design round-the-world race fleet (below) 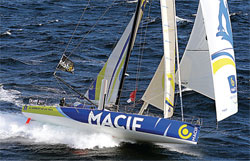 Time went on – we continued innovating and learning. We were building hull ovens the size of apartment blocks, learning to control temperatures and ‘cooking’ some alarmingly large structures. We were starting to generate enquiries from non-marine industries that were seeking a fresh approach. We built sub marine masts with 70mm-thick laminates and learned to control resin exotherms. We built fire and blast-proof enclosures and walls for the offshore oil industry and learned about a whole new category of fire-resistant materials. We built five America’s Cup yachts and (thanks to a quirk of the rules) learned to bond skins and honeycomb with practically zero adhesive. We also started working with resin film infusion and learned to reduce laminate void contents to autoclave levels in structures that were far too big to fit in any affordable autoclave.

Throughout the 1990s composite engineering was emerging from the ‘last-year-minus-one’ method. Structural engineers started to apply a more precise science, and as yacht structures became better optimised we took onboard a new imperative: control. The need to control critical build processes led to the implementation of ISO9001 quality standards throughout the yard.

By the mid-1990s three watchwords lay at the heart of everything we did: innovate, learn and control. More recently we have learnt the value of a fourth: collaborate. Since 2000 we have built carbon hulls for some of the finest shipyards in the world: cruising yacht hulls for Vitters Shipyard, such as the 32m Ghost and the 42m Sarissa; and racing hulls such as Macif and Banque Populaire – two Imoca 60s for CDK Technologies. We have learnt to collaborate efficiently with the best designers and innovators in our industry, and as a result we have worked with many of the world’s most knowledgeable owners and racing teams.

In October 2013 we will start a new project. Hull number 217 will incorporate all the experience gained during construction of numbers 1 to 216, and it will be built by a more experienced and skilled workforce than we have had at any time over the past 30 years.

The R&D programme that follows the build of every Green Marine yacht delivers more controlled building solutions for each new project. Increased control delivers greater consistency in yacht structures; greater consistency delivers less parasitic weight and greater reliability. With the success of the Imoca 60s Macif and Banque Populaire, and the TP52 Rán IV and Mini Maxi Rán II, Green Marine hulls have demonstrated their speed and reliability in 2013.