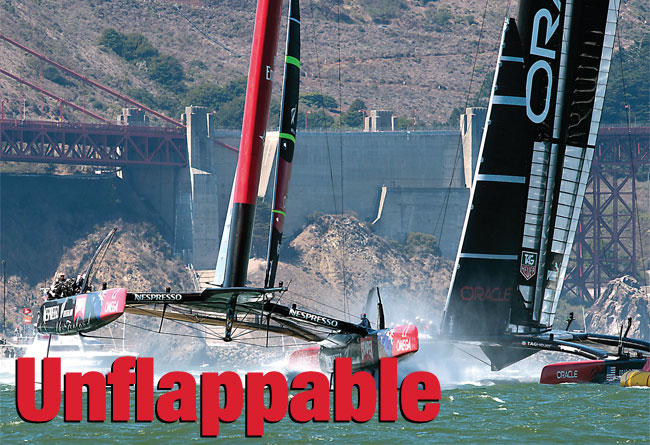 The 34th America’s Cup is done and dusted. It’s history now: the ‘mug’ stays in American hands, more like clenched fists. Everyone has an opinion of the racing – often the strongest opinions are from people who watched it, not lived it. In the end the winners write the history, but for the next 10 minutes bear with me as I tell it from the other side, as afterguard coach for Emirates Team New Zealand. The disappointment still cuts deep and will for a very long time. Maybe for ever, hopefully not.

Both teams were plenty apprehensive about their boat’s performance. They watched us, we watched them. But no one was confident they had it right. The common thought was Oracle were faster upwind, tacking and in lighter winds. Emirates Team New Zealand owned the windy stuff and downwind. Much of this was based on educated guesswork and observation. And was totally wrong! Mind you, both teams plus most of the world thought that, so we were all as mistaken as each other.

From the ETNZ side, we had made some huge gains in the weeks leading up to the Cup. In part driven by fear that Oracle had a better package upwind and tacking. We got a scare back in July when Oracle were in the same piece of water, going upwind; they cut our seven boat-lengths lead to four in a quick-fire exchange of tacks. As a coach you knew, or surely hoped, there were nice wind shifts associated with the loss. Still it was clear at that time they accelerated better out of the tacks than we did, and that was unacceptable.

So we went to work on our tacking, endlessly and tirelessly, developing the ‘roll’ tacking for a foiling catamaran. That is where you lift the old leeward hull out of the water (foiling) as you start the turn into the tack. And it never goes back into the water until it becomes the leeward hull again after the next tack. This eliminated the hull drag all the way though the tack, the lowest boat speed was much improved, making a marked improvement in our tacking.

We got another ‘fear of God’ moment when Oracle were experimenting with foiling upwind. We had tried it, way back, but could not get it right. But Oracle seemed to master it. Or so we thought! Wrong on that one, at least at that point! It would be halfway though the America’s Cup before they would start mastering foiling upwind. Again we set out to counter their move. What we found was that a blend of foiling and skimming, where the front half of the hull was out of the water, and the back half just kissing the water, was the consistent winner.

After two days of intensive training with Luna Rossa, just five days before the Cup, we knew we had made significant gains but questioned if it would be enough.