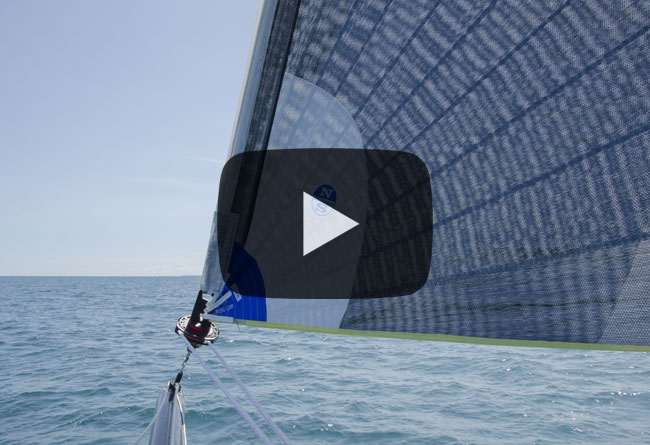 The ability to furl sails has been something we’ve taken for granted for at least 40 years. In fact, the influence of furling has been so widespread that it’s easy to imagine that everything that could be achieved has already been achieved. Except now we are finding out that it hasn’t and the next step in the evolution could represent another huge step forwards for the sport as a whole once again.

For Harken, the route began with the development of their Reflex Top- Down Free-Flying Sail Furling System for downwind sails. From the start, this was a system that was aimed at the broad sailing market and intended to enable recreational racers and short-handed cruisers to furl their asymmetrical kites and code-style sails completely and reliably so that they simply used them more often.

The system uses a torsion cable constructed from a standard polyester core (subsequently augmented by a Dyneema-cored version) and sheathed with a unique, covered stainless steel mesh, around which the sail is furled and unfurled as the control line is operated.

Pulling the furling line rotates the compact drive unit and the torsion cable, which in turn transfers the torque immediately to the head. The head swivel reacts instantly and the sail is furled around the stay.

One of the key design features was to create a system that had low friction ensuring that furling could be an easy manual operation. Utilising Harken’s famously free-rolling openrace Delrin bearings provided the perfect solution.

Meanwhile, in the sailmaking world, Doyle and North were investigating whether it was possible to remove the luff cable from their downwind furling sails. Both could see the advantages of dispensing with the need for a torsion cable by designing and building code sails that could carry the dispersed load from the tack to the head within the structure of the sail.

Main picture: Harkenʼs new Reflex Top-Down Free-Flying Sail Furling System has been developed in parallel with the latest code sail designs by Doyle and North, which donʼt have luff cables. Together, these major advances in sail and furler technology enable sails to fly and work more efficiently with much less load on the boat and rig while remaining easy to furl by hand

At the same time, the shape of their sails saw more pronounced luffs that are projected to windward to create a straighter luff for a fraction of the load that would have been required in conventional systems using cables under tension.

The increased performance of the sails took little time to confirm, while the reduction in loads was dramatic. Depending on the sail and specific boat, reductions in load at the tack of between 30-50 per cent were being reported.

It was at this point that the technology around these sails and Harken’s Reflex furling systems started to converge.

‘I was at St Barth’s Bucket sailing on Blue Too with Richard Bouzaid and John Baxter from Doyle Sails and I was picking their brains about cable-less code sails,’ said Harken’s head engineer Steve Orlebeke. ‘It became clear that this technology was starting to trickle down into smaller boats. That got me thinking about how we could adapt our Reflex furlers to accommodate these sails.’

One of the key points that Orlebeke brought back from St Barth’s was that tack loads had come down considerably to a point that it was possible that the low friction Reflex furlers could be used without the torsion cable.

From there, a small batch of custom-made tack plates were built to trial 75 per cent mid-girth sail designs, sized for a group of raceboats in the 32ft-50ft range.

Testing went well from the start and the system has now been rolled out and is currently aboard a range of boats including a J/145, J/109, J/99, J/97 and a Swan 42, which have used a variety of sails from both Doyle and North to great effect. 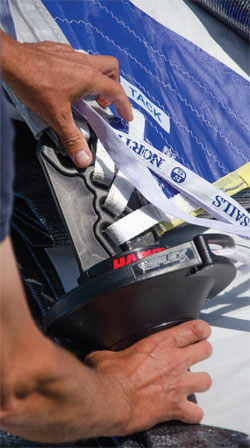 Above and below: a key feature of the Harken Reflex furling system is a tack plate that is sewn into the sail and slots into the Reflex drive unit. This allows a variety of reaching and broad reaching sails to be used with the same drive unit while also maximising the sailsʼ luff length. A small, lightweight top swivel unit is also sewn into each sail. Apart from the major performance boost when deployed with sails from Doyle and North, Reflex delivers easier sail handling and stowage 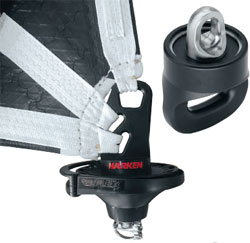 ‘Our J/145 has a very long retractable pole – almost nine feet – and there is no bobstay which is a problem,’ said Sailing magazine’s publisher Bill Schanen. ‘We wanted a code sail with a 75 per cent girth measurement that we could fly off the end of the pole. It had to furl, but we didn't want the hassle or the weight out there of a conventional torsion cable. When we heard about the Reflex we called North Sails and talked about making a sail. We were delighted to see that it flies and furls with very little luff tension.’

But it’s not just about easy furling and deployment of a code sail. Early reports from the racetrack point to a new style of sailing where crews are able to use the sails in different ways across a wide range of wind angles, especially in light weather, to enhance performance. In some quarters, the sails are already being referred to as “tweeners” as they span critical gaps in sail wardrobes.

‘This is the biggest step forward in the sailmaking world for a long time,’ said Orlebeke. ‘People here on the Great Lakes, who’ve been using these sails for distance racing, say that if you don’t have one it’s difficult to compete, it’s that big a step forward. In particular, they are proving unbeatable combined with the ability to transition quickly back and forth to headsails…which efficient furling makes possible.

Meanwhile, for the sailmakers, the ease of deployment enabled by Harken Reflex is starting to influence the shapes of the sails themselves.

‘The cable-less technology really focuses more on the load distribution in a sail and what this does to the overall loading,’ explains Doyle Sails’ Richard Bouzaid. ‘What we have done, and our goal with this technology when we started to develop it, was to have sails fly and work more efficiently with less load on the boat and supporting structure.

‘This has allowed us to put big reaching sails onto boats that in that past could not have them due to the high loads: cruising code zero sails on superyachts, racing sails on prods where the prods were engineered to low loads, and so on. This is where the real gains are and it has a significant impact on not only sail design but rigs and boat structures.’

North Sails are also clear on the benefits and refer to the new concept as Load Sharing Technology, which has led to their range of Helix sails.

‘The big gains with Helix and Load Sharing Technology, especially on reaching and broad reaching furling sails, is overall weight reduction and the ability to really adjust the leading edge of the membrane’s shape with a very small luff cable or rope, not the large and heavy torque cables that have become commonplace,’ says North Sails’ group president Ken Read. ‘We are very excited about all the avenues this has opened for the use of 3Di in this process,’ Read adds.

But it’s not just the racing scene that is seeing the advantages. One of the objectives with the Harken Reflex project was aimed at encouraging recreational sailors to get the A-sail out of the sail locker. The ease with which downwind and reaching sails can be handled was the primary attraction with Reflex, but now their cable-less system, means that the sails can be moved around and stowed more easily too as they take up less space.

And then there’s the big picture further down the track. Taking loads out of stays reduces the compression loads in the rig and the bowsprit. Reducing compression can then potentially reduce loads throughout the rest of the boat.

It’s the kind of design spiral that engineers and sailors love and one that frequently sees big leaps in both performance and handling.

So while the broad concept is a familiar one across the sport, there are those who think the future of furling is on a roll.