For all the right reasons... 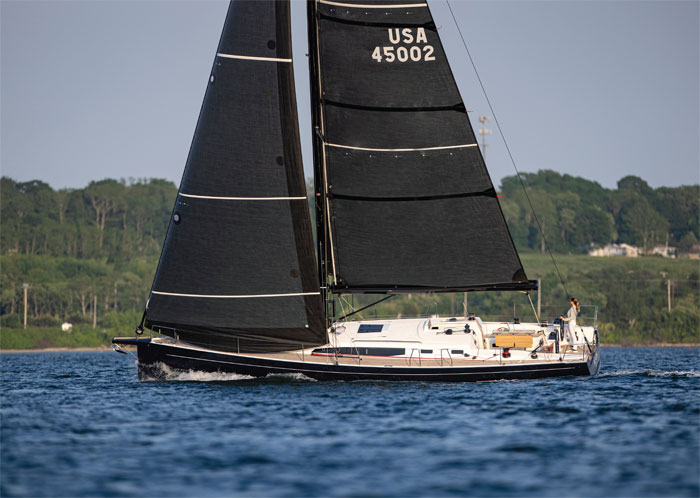 Excellent and reliable all round performance, safely and easily driven in bad weather, unremittingly well-built and with those legendary resale values... when J Boats step up into the long distance cruising market it’s always going to be good...

J Boats is so well-known for building racing yachts that it’s easy to forget they also produce a lot of cruising boats with the same well-defined character. The original J/24 is the world’s most successful onedesign racing keelboat with about five and a half thousand launched worldwide, but it was initially conceived, designed and built as a family boat, primarily intended for fast coastal cruising. And the J/112E, which won the last ORC/IRC combined World Championships, is another cruising boat that just happens to be a brilliant performer on the racecourse as well as a comfortable, easy-to-handle offshore voyager with a fully fitted interior.

Throughout the four decades that separate those two designs, J Boats has introduced a dozen pure cruising models (as well as a lot of cruiser-racers and racer-cruisers) and launched more than 500 purpose-built offshore cruising boats in North America alone, with many more built by the J Composites shipyard in France that now plays a major role in the development process as well as building the boats under licence. The most recent pure cruising model, currently in production in France, is the blue water-focused J/45. 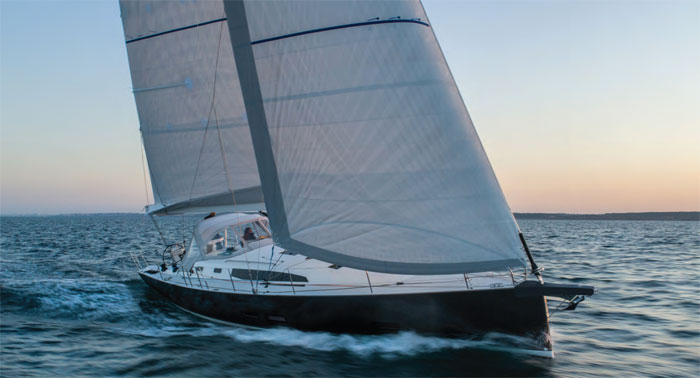 The J Boats philosophy is not about trying to achieve the highest possible top speed. It’s about maintaining consistently high average speeds in a wide range of wind and sea conditions

‘Ever since the beginning of the brand in 1977, cruising yachts have been part of the J Boat range and cruising has been an important part of the brand’s DNA,’ says J Composites’ commercial manager, Fréderic Bouvier. ‘People often assume that J Boats are stripped-out racers but many of them aren’t. When we hear people saying this at boat shows, we invite them to take a look down below and they are always amazed.’

Over the years J Boats have gradually evolved with new features added but with great effort made to preserve the marque’s distinctive character. ‘All new models are designed completely from scratch, not adapted from a previous model. Each one represents at least two years (and often three or more) of design and development work. The devil is in the detail, quite often there are heated discussions within the design team and between the US and French partner companies about tiny details like a centimetre of headroom or beam.’ Crucial strands of the brand’s DNA include high righting moment and good performance in light airs. The design office’s rule of thumb is that in five knots of breeze, a J Boat should be able to sail at least as fast as its cruising speed under power.

‘Every sailor in their heart loves a bit of extra boatspeed but very few cruising sailors will buy a new boat just because it’s half a knot faster. It’s not about that. For most of us performance is about the pleasure we get from sailing. It’s about speed but also about achieving a superfine balance. On most cruising yachts when you adjust the mainsheet by 30cm you won’t notice any difference. On a J Boat you feel it instantly through the helm.’

Having a single rudder is a key factor in optimising helm response but it’s not the only one. ‘It’s also important to have a balanced hull shape and sailplan,’ Bouvier says. ‘And we do a lot of work on steering system alignment. Even with self-aligning rudder bearings attention to detail is needed.’ This includes sourcing top-quality bearings, minimising friction throughout the system, using precisely balanced rudders custom made by a specialist rudder builder, and a carefully judged ratio between the quadrants and the size of sprocket behind the wheel. ‘From stop to stop is not much more than one turn of the wheel – it’s very direct. The risk when you do that is the wheel gets too heavily loaded. Getting it right requires engineering and a lot of time spent.’

Below: boat show visitors are often amazed when they look inside a cruising J Boat 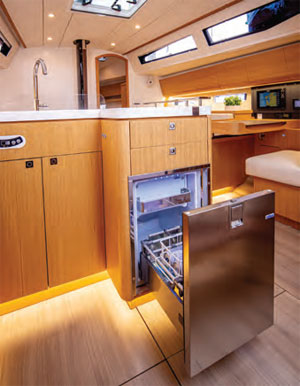 Another important part of the J Boats formula is that the yachts should be able to sail through difficult conditions with relative ease. ‘Most boats, especially cruisers, can’t sail upwind effectively in 35kts, you need to motorsail or run downwind. In a J Boat you can, you just need to reduce the sail area. All J boats have super high stability – their STIX numbers are far higher than a typical offshore cruiser that relies on form stability. And in heavy weather the quality of the infusion in the hull makes a difference: the hull doesn’t deform under load which improves the boat’s sailing ability.’ All-round performance in the full range of conditions and all-weather seakeeping are regarded as critical safety features.

Most cruising yachts currently on the market are optimised for sailing downwind, yet only a tiny minority of cruising sailors spend most of their sailing time reaching or running in trade wind conditions. ‘Upwind VMG is very important in normal cruising use,’ he adds. ‘In crowded sailing areas like the Mediterranean you can’t always go where you want. In high season many harbours are fully booked up a month in advance so the reality is that you go where you can. And that often means you have to sail upwind.’

Light air performance is also important, he says. ‘For a typical cruising sailor, 90 per cent of sailing is done in winds of 5-15kts. Most cruising boats, when heavily laden, are simply stuck and rely on their engine in less than 10kts of breeze. J Boats are among the lightest in displacement and have the smallest wetted area, which ensures that they perform extremely well in light airs.’

Why care about how a cruising boat sails in winds above 15kts? ‘It’s important because you do get caught out from time to time in a rising wind and sometimes you simply have to get around that headland. Hull stiffness becomes a key consideration in stronger winds. When the hull doesn’t distort under load, the sails will keep their shape more effectively in 20kts-plus.’

The shape of the hull also dictates sailing ability and motion comfort in waves. ‘That’s why J Boats have a fine entry and narrow beam. There is no slamming and less pitching, both of which compromise the boat’s sailing ability as well as being uncomfortable.’

Low freeboard is an asset when cruising – it makes berthing and mooring easier as well as reducing windage – and it doesn’t necessarily mean the crew gets wet. ‘The shape of the hull and especially its forward sections have a much greater impact than freeboard on the amount of spray that reaches the cockpit,’ Bouvier says. ‘A blunt, high-volume bow and a shallow forefoot will make a boat wet as well as uncomfortable when sailing close-hauled in stronger winds.’

Hull shape also has a significant impact on load-carrying ability. As ocean racing hulls have got progressively beamier, super-light displacement has become ever more crucial to ensure good boatspeed. Cruising yachts have followed a parallel trend of increasing beam and as a result, their load-carrying ability has diminished.

‘For a family cruising long distance in a 45-footer, the payload of equipment, provisions and gear is often as much as 2.5 tons. That weight will have a far greater impact on the boat’s performance if it has a wide, shallow-bodied hull than if it has a relatively narrow, deeper-bodied hull shape. For the moderate hull of a J boat the effect of payload on performance is basically linear; for a more fashionable modern cruiser the effect is exponential.’ ‘For a yacht with a wide, shallow-bodied cruiser with a full payload the solution is to add more sail area, which increases the loads on the rig and deck hardware and makes trimming the sails more complicated and difficult,’ he says. ‘In light or moderate winds you’ll need a big code sail to keep up with a J Boat with a standard genoa and mainsail.’

Below: cruising J Boats, like this J/45, have a good standard of interior finish but the brand’s build quality is primarily focused on long-term durability and strength 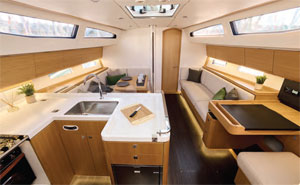 For ocean racing there’s a big benefit in a hull shape that generates a lot of form stability, hence the trend for powerful aft quarters and hard chines. For this configuration to work efficiently, upwind or reaching, you need to sail the boat with at least 20° of heel. ‘For offshore cruising that's not comfortable for the crew,’ Bouvier says. ‘Instead of relying on form stability J Boats have more ballast in the keel. They’re designed to sail efficiently at a less steep angle of heel.’

The downside of moderate beam is less interior volume. ‘That’s true, but we offer a similar size of living space by building our interiors with everything tabbed directly to the hull. Most shipyards tend to leave big gaps to ensure that the furniture fits easily, which also speeds up the installation of systems. The way we do it is more labour-intensive for our workers but it’s a more efficient use of space.’

The brand’s approach to build quality is also a bit different. ‘We achieve a good standard of finish but our interior fit-out is primarily focused on long-term durability and strength,’ Bouvier says. ‘In Cannes this year we exhibited a one-year-old J/45 that has competed in various regattas, cruised long distances and seen quite a lot of hard offshore sailing use. After a bit of careful cleaning it was indistinguishable from a brand new boat.’

J Composites has a general philosophy of sourcing equipment and hardware separately for each model, rather than the simpler and more usual approach of buying in bulk from a small number of suppliers for the entire range of yachts. ‘Some of the boats’ technical systems are assembled in house from individually sourced components rather than being bought in as complete systems,’ Bouvier says. ‘And where whole systems are supplied ready to fit, they are often customised by the supplier to our own specifications.’ This level of attention to detail might seem over the top to some cruising sailors. But to a racing sailor that’s how it should be.