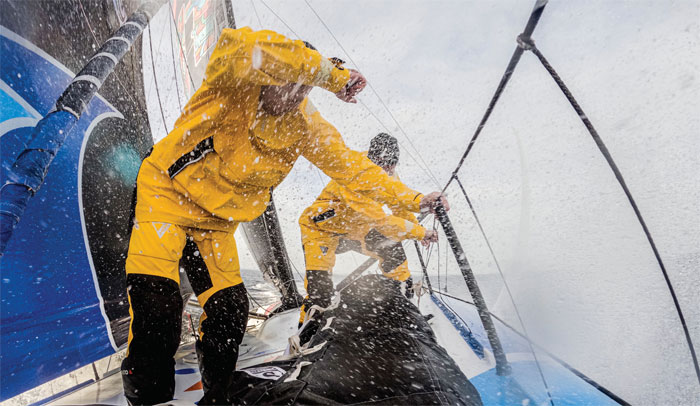 Racing Imoca 60s fully crewed around the world has never been done before. In the 2023 Ocean Race these boats will be under a whole new world of pressure. So will the technical clothing protecting the crews...

Musto’s iconic HPX technical clothing has been fully redesigned and redeveloped ahead of the latest edition of The Ocean Race. A lot of testing and feedback from Imoca 60 sailors, especially 11th Hour Racing Team, has informed the design process which was underpinned by four key pillars: durability, safety, adaptability and sustainability.

The jacket, smock, salopettes (both men’s and women’s) and drysuit are all completely new, as are the fabrics, while both mid and base layers have been fully integrated into the HPX system for the first time.

‘We always believe we can make something better,’ says Musto’s head of product Chris Holliman. ‘For HPX it started with the transition to foiling Imocas, which resulted a change in the way our kit is used. In early 2019 we caught up with Charlie Enright, Mark Towill and the rest of the 11th Hour Racing Team in France to discuss the initial designs for their new foiling boat that was launched in 2021.’

‘That process led us to go back and understand where we could make tweaks and evolutions to improve the product,’ says product marketing manager and former Figaro sailor Hugh Brayshaw. ‘Even during Covid we kept close to the sailors to continue to understand their changing needs.’

Main picture: A lot of testing and feedback from Imoca 60 sailors and especially from 11th Hour Racing Team has informed the redesign of Musto’s iconic HPX technical

In any domain the best products are usually a result of long-running collaborations. As well as working with its ambassadors – including eight in the Imoca 60 fleet – Musto’s partnership with Gore-Tex now spans almost 30 years. Equally, Musto has a huge in-house knowledge base. For example, technical production manager Shaun French has been with Musto for 25 years. ‘He’s a font of knowledge and we worked very closely together throughout the development and testing,’ says lead designer Lucy Davis.

The new fabrics have a slightly finer yarn with a very dense weave. ‘It's woven so tightly the little divots on the surface of the fabric, where water can sit, are much shallower than before,’ says Davis. The fabrics now wet out more slowly and are less reliant on the DWR (durable water repellant) coating. Gore-Tex also has a new and more durable breathable membrane that retains the high level of breathability and waterproofing of the previous version.

The Cordura reinforcement on knees and seat of trousers and drysuits, plus the back of smocks and jackets, is also key to durability. ‘It has been round the world many thousands of times,’ says Davis, ‘and is still the best way of providing this sort of reinforcement. We trust it and know it works. It passes 100,000 rubs in lab tests and we know it stands up to aggressive deck surfaces.’

‘We work very closely with Sam Davies,’ adds Brayshaw. ‘She gives regular feedback about the grip on her deck, which is quite extreme and can wear knees very quickly. If we can make it work for her it will work for everybody.’

The need for garments to be as adaptable as possible was a core requirement for 11th Hour Racing Team. The hood of the smock and drysuit can therefore be removed when conditions allow and stowed in the garment’s front pouch, yet it’s easy to put on, even when hiking on the rail. The hood is shaped to sit as neatly as ever on your head, yet there’s enough adjustment to accommodate a helmet. 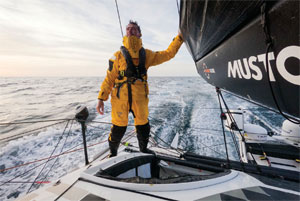 The HPX drysuit (above) and smock (below) now have a removable hood, which stows in the front pouch. The pockets have been repositioned to improve access when worn with a lifejacket

Musto also works closely with the Clipper Round the World Race, which helped develop new safety features. Crew are required to wear lifejackets on deck, which has a bearing on hood design, as these tend to sit in the same part of the neck as the hood of foul weather gear.

‘This can cause multiple layers of material to form a lump that pushes into the back of your neck, pushing your head forwards,’ says Davis. ‘HPX hoods therefore now stow about three quarters of the way up the collar, above where the lifejacket sits. Lifejackets also have an important bearing on the position of pockets, which have been repositioned so it’s easy to get your hands into them’.

The HPX jacket retains the same features as the smock, with the exception that the storm collar and hood aren’t removable. It also has a secondary collar made of stretch PU with hook and loop adjustment tabs.

The drysuit also underwent major changes, including a horizontal zip which makes it much easier to put on. ‘Imoca sailors can take the top off if they want to when inside the cockpit,’ says Davis. The fabric boots gain an abrasion resistant film to improve longevity, while the unique inflation tube is retained.

Musto has women's salopettes in the HPX range for the first time. The drop seat is of a unique design, with a horizontal waterproof and airtight zip similar to that of the drysuit.

The D3O impact kneepads are now inserted in a pocket beneath the Cordura patch, so they won’t catch on boots when putting salopettes on. Their shape has been modified and they are now held in place with hook and loop tabs, so they can easily be positioned perfectly for each person.

Throughout the range, where hook and loop tabs are used, a hole is laser cut in the main fabric, allowing the hook and loop tabs to be stitched on from underneath, eliminating sharp edges on cuff tabs and other elements. Other neat touches include new photo luminescent reflectors that, as well as reflecting a light source, glow in the dark for four to six hours after dusk. The Musto logo is also reflective, as are the hanging loops and owners’ labels, so it’s easy to find yours when going on watch. 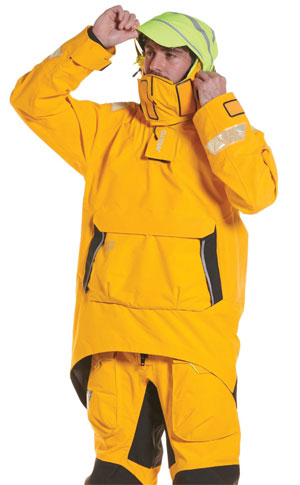 For the first time the HPX range includes mid and base layers that are a perfect technical complement to the outer layers. As the kit is aimed primarily at ocean racers who may wear it for weeks at a time, odour control is critical. ‘The feedback from all sailors is that merino wool is the only material that doesn't smell terrible after a few days,’ says Davis.

The bacteria that produces body odours can't grow on merino yarn. However, it is not a durable material, especially in the micro weaves that create a smooth, comfortable fabric. The solution is to reinforce the base layer knees, seats and elbows with a four-way stretch Cordura with a longlasting DWR coating and a soft feel.

‘It feels nothing like the Cordura that you'll be familiar with on foul weather gear,’ says Davis. ‘It's very light, very smooth and incredibly stretchy. Water beads and rolls off fast and because it’s used only in areas where you don't sweat there’s no problem with odour control.’

Effective mid layer systems are a difficult balancing act. The idea of a waterproof, breathable mid layer is enormously appealing but often counterproductive. Body heat pushes water vapor through a breathable membrane and out to the surface of the fabric. But there’s often not enough heat to push water through two membranes, which results in condensation inside the outer layer.

Musto therefore uses the most breathable Gore-Tex membrane, Infinium, for mid layer HPX. ‘It delivers the perfect combination of air permeability and high water resistance,’ says Davis, ‘so you can dash out on deck without getting soaked. We insulate it with PrimaLoft Gold Active, which has a fantastic warmth to weight ratio.

‘Both the lining and the outer shell are super breathable, which is very unusual for an insulated garment. That means you don't get condensation building up inside foul weather gear, which can make you think that your kit's leaking because you’re wet inside.’

Mid layer salopettes have stretchy shoulder panels for comfort and tapered legs, so there’s no excess fabric inside your boots. They also have a drop seat, which works both for women and for men.

HPX is designed to cross oceans and go around the world. However, another outcome of the work Musto has done with the sailors in France is that the HPX, MPX and LPX product families are now all interchangeable. For a race like the Rolex Fastnet you might choose an HPX trouser for maximum protection, an MPX jacket for routine use, plus an HPX smock for sailing upwind in big breezes. Similarly, many of the Imoca sailors in September’s Defi Azimut race wore HPX trousers, with an LPX jacket for 70 per cent of the time, while keeping HPX products to hand for ultimate protection in really tough conditions.

The combination of HPX base layers, mid layers and outer layer promise warmth and comfort over long periods in extreme environments. Charlie Enright and the 11th Hour Racing Team have tested a lot of iterations over the past three years. Equally, many other professional sailors contributed valuable feedback, notably Sam Davies, Sam Goodchild and Jérémie Beyou, who took a prototype set of HPX salopettes on the last Vendée Globe. These new Musto HPX products have therefore already successfully covered many thousands of miles at sea.