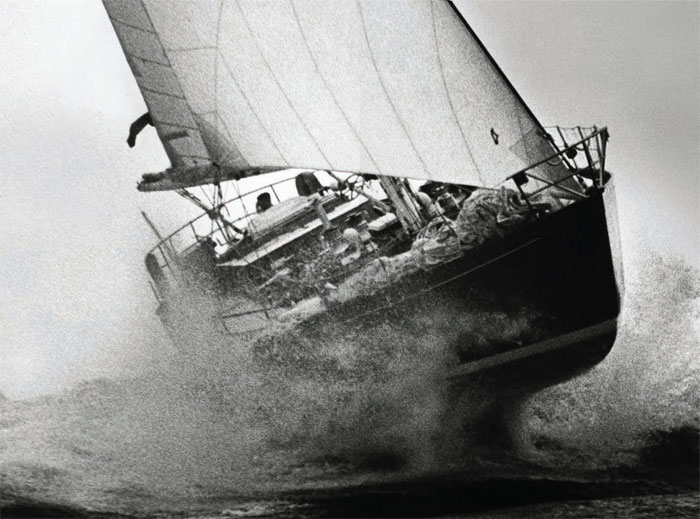 Germany’s North Sea Week is celebrating its comeback to the international race calendars. Once a major hub of the international offshore elite and a unique stage for spectacularly exciting One Ton Cups and Admiral’s Cup trials, Germany’s only real offshore regatta series in the North Sea today has developed into a multi-faceted event with a modern face. The 100-year-old “Nordseewoche” is back on course for a bright future.

Part of its success is the sailing marathon Pantaenius Round Skagen Race. Held every two years, the challenging 510-mile course is among the oldest and most popular offshore races the sailing world has to offer. Just seven years younger than the famous Rolex Fastnet Race and 13 years older than the Rolex Sydney Hobart Race, the course of the Pantaenius Round Skagen Race takes its fleet through three completely different stretches of water. Starting against the backdrop of the red rock of Germany’s only true high seas island, Helgoland, the race also tests its competitors in the notorious Skagerrak and finishes in the Baltic Sea port of Kiel, the “City of Sails” and the home of Kiel Week.

Those who were involved in the North Sea Week’s glorious heydays between the 1960s and the 1990s, will certainly remember the high caliber of racing at the time. Superpopular were the One Ton Cups in 1968 and 1969. In 1968, Hans Beilken’s crew on the Dick Carterdesigned Optimist won the fiercely contested championship. In 1969, Chris Bouzaid’s Sparkman & Stephens 36 Rainbow II left the fleet behind. The waters off Helgoland also became famous for the toughest German, and sometimes also international, Admiral’s Cup trials and training ground. Any crew training here was more than well-prepared for the Solent and the Fastnet Race. 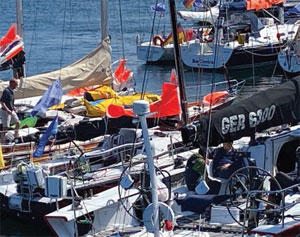 In 1973, Helgoland marked the summit of German offshore racing. The crews were unfazed by force eight and the steepest of seas. Some crews did not even drop their spinnakers at night. With that endurance test in their bag, a German team consisting of Albert Büll’s Saudade, Dieter Monheim’s Carina III and Hans-Otto Schümann’s Rubin won the Admiral’s Cup for the very first time.

Remember 1995 when the Kiwis robbed the America’s Cup from Dennis Conner? Young superstar Russell Coutts barely had the time to celebrate victory in San Diego before the always imaginative German owner, Thomas Friese, persuaded Coutts to fly immediately to the small German island of Helgoland, together with some of his Kiwi comrades-in-arms, to support Friese’s two-boat campaign. In a fierce exchange of blows in the German trials for the 1995 Admiral’s Cup, it was Thomas-I-Punkt against the superior Daimler-Benz campaign AeroSail. The final German team then consisted of Willy Illbruck’s Pinta, AeroSail’s ILC 40 Anemos and Friese’s Mumm 36 Thomas-I-Punkt. Once again, the Germans were the bookmaker’s favourites to win the Admiral’s Cup. In the end they had to line up in third behind Italy and the United States. ‘But the Germans were world class in preparation’, said Alan Green, director of racing at the Royal Ocean Racing Club at the time, and who had a good understanding of how valuable training and racing in the North Sea had always been. 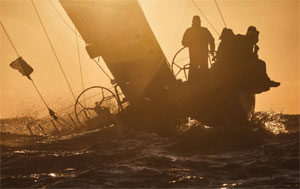 Above: sailing into a North Sea sunset, the quality of the light is spectacular.
Below: the classic S&S Swan 48 Elan, owned by the Baum family of Pantaenius Insurance, has won the Round Skagen Race three times 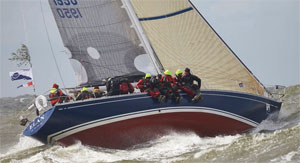 In the years that followed, the North Sea Week felt the consequences of the dying IOR scene and the fading light of Admiral’s Cup. The face of the North Sea Week slowly changed reflecting the European development in big boat sailing. The number of participants went up and down.

In 1994 the famous Round Skagen Race had a new sponsor, the international yacht insurer Pantaenius. Its boss Harald Baum has competed in more than 30 editions of the race, always relying on his Swan 48 Elan, built in 1973. This year, the well-maintained warhorse won the offshore race for the third time in the history of the North Sea Week, skippered by his son Daniel Baum. Family tradition is an important facet of the regatta series. Father Harald Baum has always described the Pantaenius Round Skagen race as the “race of his life”. In 2010 he said, shortly before the starting signal for his 27th participation was given: ‘the Pantaenius Round Skagen Race is anything but an ordinary longdistance race. It is the only real offshore race that Germany has to offer, and it passes through three very different sea areas.

‘The North Sea from Helgoland to Hanstholm is a shelf sea, rarely deeper than 20 - 30 metres, with correspondingly hard swells and bottom seas in the prevailing westerly winds.

‘The Skagerrak is the tongue of the Atlantic with water depths up to 1,000 metres and shallow bays on Jutland’s coasts, such as the Jammer Bucht which does not have its name without reason: “Jammer” means “whining” and refers to the many seafarers who ran aground on the lee shores of this area. ‘I have experienced wave heights of up to 18 metres, as well as the most peaceful pastel colours that only the North has to offer. Unforgettable.

‘Finally after rounding the Skagen buoy is the Baltic Sea, moody but never boring with many opportunities and options for tricky tactics as at Læsø, and in the Great Belt under Langeland, until Kiel lightship is finally passed on the port side. Each time, a unique challenge,’ Baum concludes. 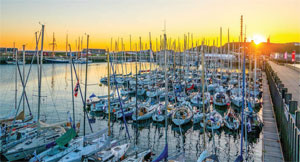 Above: North Sea Week is once again drawing a very large and diverse fleet of competitors.
Below: the iconic red sandstone sea stack Lange Anna provides a dramatic backdrop for many of the start and finish lines 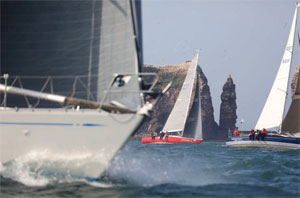 The Pantaenius Round Skagen Race as well as the North Sea Week itself are once again attracting more and more record chasers and international participants. This year, Jens Dolmer’s crew on the VO70 L4/Trifork were the pre-race favourites for the Round Skagen record. They sailed a promising course for a long time before they were slowed in the windless Baltic. So the 22-year-old record continues to stand.

In 2020, Dr. Klaus Murmann's Baltic 67 Uca mastered the course in only one day, 19 hours and 26 seconds. Since then, many elite crews have cut their teeth on it. The next chance to break it will come in the super-sailing year of 2024, when Olympic medals will be contested off Marseille in the summer, followed by the America's Cup off Barcelona and the Vendée Globe starting in the fall. Why not open the season with a special record attempt?

The North Sea Week organisers will be well prepared. Today, their rejuvenated and strong team of 50 organises the series and the biannual Pantaenius Round Skagen Race. The team is led by the experienced event director Marcus Boehlich and race director Albert Schweizer, who himself competed in the North Sea Week a recordbreaking 36 times before he swapped sides in 2017 and now ensures good sport for the wide range of competitors. Fifteen very different races to and from Helgoland as well as beautiful racing around the “Long Anna”, as Helgoland people and everyone else call the 47- metre high red sandstone sea stack at the northwest tip of the German North Sea island – it all adds up to a multi-faceted event which is the cradle of the German ocean sailing.

Competitors of all backgrounds can choose between racing in the family cruiser division, being part of the beautiful classic fleet or living out their ambitions in one of the ORC club groups. More than 100 yachts and more than 1,000 sailors were part of this year’s emotional and captivating comeback of the North Sea Week after two years of forced pandemic pause. The euphoria was contagious.

The organisers have their ears to the ground. They never stop creating new formats in reaction to the latest developments on the scene. The 2022 anniversary edition saw the first and successful tests with a remote-controlled Smartmark buoy, which is also used in the leading TP52 circuit. The North Sea Week team is now looking into additional concepts for opening the week to more international competition.

‘We’d love to welcome more participants from the Netherlands and Belgium, the UK and also Scandinavia. Helgoland offers highly attractive racing and a great spot to get together as a European sailing community and enjoy the sport together’, says Albert Schweizer.

While the 2022 North Sea Week marked the 100th anniversary of the series, plans for the next edition are well under way. Among the ideas to combine North Sea sailing with high-class and exciting racing is a new North Sea offshore format that will be staged in the odd-numbered years while the Pantaenius Round Skagen Race is held in even years. With the new ORC multihull rule already in sight, it won’t be long before the first multihulls show up off Helgoland and attack the Pantaenius Round Skagen record.