We’ve got it covered 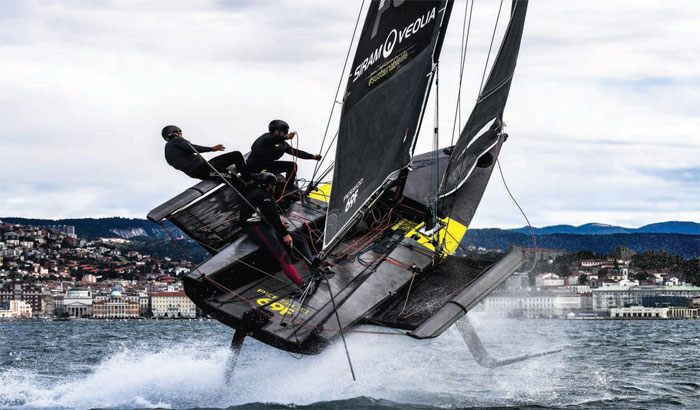 Development classes have always and always will be a place for innovation in our sport. For far too many years it has felt like the top end of yacht engineering was an area limited to refinement of established practices. But there is a point where the level of refinement in itself is a revolution. The current development classes of main focus in our sport are Imoca and AC75. Persico Marine is currently working hard at balancing the calendar of these two classes, as well as some intriguing in-house developments, to ensure that the company is centre stage for all that the classes and their designers and teams can come up with.

The AC75 build is still some way into the future. But the planning is well established with Luna Rossa Challenge. Persico Marine was heavily involved with the first outing of these machines, with the contract to build all of the supplied foil arms to the strictest of tolerances, as well as the first two Luna Rossa designs to meet the new class rules. There is much talk about the new developments from the defender requiring challenging teams to compete in the AC40 in events and training prior to AC37. However, the management of Persico Marine has seen, through the now well- established Persico 69F fleet, that the interest for racing fully foiling machines goes way beyond the rare atmosphere of the America’s Cup, and has had the development of the Persico FLY40 ticking along for quite some time now.

It is important to now see the Persico FLY40 as the standalone development that it is. It is not intended as a rival to the AC class, but as a class very specifically aimed at the owners and teams who want to race these machines rather than watch them race. As you would expect from a company seated in the foothills of northern Italy, a lot of thought has gone into the styling, with Pininfarina being a partner in the project and developing the look of the fleet. This is further enhanced with the enthusiastic involvement of Peter Harrison, CEO of the Swiss watchmaker Richard Mille and the palpable excitement of Pierre Casiraghi, Yacht Club de Monaco’s vice-president, who are both eagerly awaiting getting their hands on the wheel. The focus here is very clearly on being a step up in size and speed from the Persico 69F.

Here is where the Persico Marine experience comes into its own. The idea is not just to create a strict one-design, but a management structure for the class, circuit and maintenance of these complex machines. Persico Marine knows full well that the learning curve is still steep for this style of sailing. If the maintenance and servicing of the fleet can be centrally managed, it allows owners to focus on getting out racing and helming their steeds, not watching them from a tender. This means that resources can be pooled and costs controlled as we saw in the VO65 fleet, which Persico Marine was also heavily involved with. But none of this takes away from the fact that the engineering of these yachts has to be precise.

Main picture: the Persico 69F established the template for a tightly managed one-design racing circuit for foiling boats.
Below: the same concept has now been scaled up for the FLY40 – a big step up in size, speed and technical complexity – with logistics, maintenance and events management included in the package 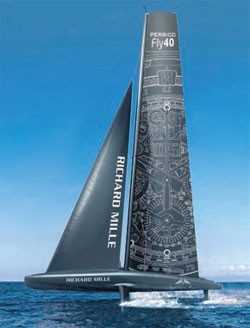 Traditionally, if you wanted to make sure that something was strong enough, you engineered it to what you expected to be the maximum loads, then added a bit. More weight, but necessary. This extra was there to compensate for not only the unexpected, but also any imperfections in build and calculation. Now yachts are flying, the extra weight is no longer an acceptable value in the equation. So, the alternative is precise engineering and perfection in manufacturing. Here Persico Marine has made huge strides in recent years, seeing the developments occurring elsewhere within the Persico Group. If you want consistency and tight tolerances, it can only be achieved through striving for perfection. If one part of the structure needs adjustment to fit, then the same has to be done for all of the builds. Much better to get it right and accurate first time, and stick to that.

Now, looking at the far more mature class that is the Imoca 60, this is a class that dipped its toes in the water with foils when the idea of a flying monohull was little more than science fiction. The initial development was an addition to the existing platforms, with little full understanding of the increased loads that the hull and structure would be asked to cope with, particularly as the foils got bigger and bigger. Whilst structural failure in the class 12 years ago was a pain, and often resolvable through a chat on the phone between the sailor and the engineer, finding a makeshift repair from what was on board, the refinement of the engineering over recent years has meant that often what may appear to be a small structural issue can actually be a fundamental show stopper for a campaign. As such, again, quality, consistency and a full knowledge of the accuracy of build becomes the focus. For Persico Marine, this was shown to a large extent with the last Imoca to come out of the Nembro yard doors, LinkedOut. The Verdier design that started life as the Volvo Super 60 was soon developed into the racing steed for Thomas Ruyant, who, along with Morgan Lagravière, stormed to victory in the 2021 Transat Jaques Vabre. In a class so closely fought and with such great names on the start line, this comprehensive victory was only possible because the team could press and press, knowing that they had full trust in the yacht. 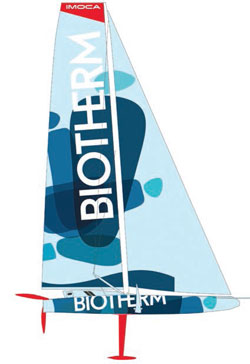 Above and below: Paul Meilhat’s is one of two Imoca 60s in build at Persico’s Nembro yard. While some components are now built by robots to a higher specification than any human could achieve, skilled composite laminators still play a crucial role in Persico’s raceboat production 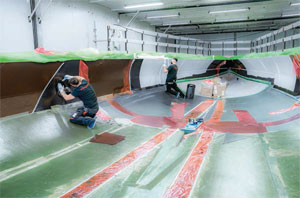 Persico Marine is now in the final stages of assembling Biotherm, a near sistership to LinkedOut, using the same, slightly modified tools and the same meticulous approach. Persico Marine are very proud to be working with Biotherm and reusing the tooling as far as possible, with the approach of refining even further what has been learned to date with this evolving design. As with the Persico FLY40, the Imoca builds today cannot afford to carry around extra weight as a backup. Engineering has to be precise, with a true knowledge of the limits and the build has to meet the engineering precisely. The Imoca class has even given specific permission for Persico Marine to manufacture components using a robot with lighter weight laminates than normally permitted within the class. With precision in mind, the robot is far better suited to laying down multiple layers of lower weight tapes than the normal hand-laying methods. Thus, and since it doesn’t take coffee breaks, it can efficiently and accurately lay the fibres exactly where needed and in less time than it would take a highly skilled team to do so with the normal heavier fibres that the class rules envisaged.

In theory there is no performance advantage as the same total weight is needed in any one direction to replicate a 300gsm unidirectional laminate. But as the robot completes this in two layers of 150gsm material, the precision is where the benefit is truly seen. And the robot really comes into its own when manufacturing the structures for the foils. Where hundreds of layers of unidirectional fibres are needed to all follow in exacting paths, what better way to ensure accuracy and no distraction than through a robot?

Interestingly, Persico Marine is also applying itself to what might be considered a more traditional Imoca. During the previous Vendée Globe, many were surprised to see Jean Le Cam maintaining his position and nearly getting onto the podium with a non-foil assisted, older design. The theory being that higher top speed will never beat higher average speed around the planet. Jean demonstrated this well. But many were left asking “what could he do with a current generation version of the same idea?” Persico Marine is currently completing the tooling for a boat to answer just this question.

With Jean Le Cam firmly behind the project and a hope to build multiple boats from the same tool, Persico Marine is at the heart of answering whether simplicity, when pushed to the same levels of accuracy and quality of build as the high fliers, can beat them at their own game. Maybe the latest weather models will help or hinder. But the one certainty is that the theory will be put to the test without the normal caveat of it being a second-tier campaign with an inferior boat. The engineering and production will be of the level now expected from Persico Marine, so we will be able to see a true comparison of approaches.

The years of gradual refinement in boatbuilding seem to now be behind us. There is now a revolution in quality that is allowing engineers the freedom to work in a realm that they used only to dream of.