And with their new flagship Grand Soleil 72 Cantiere del Pardo have truly excelled themselves...

Grand Soleil has a new flagship. Or arguably two, because the Performance and Long Cruise versions of the Grand Soleil 72 have distinctly different decks. It’s a significant move by Cantiere del Pardo, scaling up to maxi yacht production. This isn’t their first foray into that market (witness the GS 80) but rather than being a full custom project, the GS 72 is designed and engineered for series production.

The concept took shape in discussions between the shipyard and Nauta Design. ‘It started with the idea, shared between us, to realise a top-of-the-range project,’ Nauta’s co-founder Massimo Gino recalls. ‘A beautiful, fast, modern sailing yacht with excellent performance, yet comfortable and elegant, a boat that is all-Italian and that exudes in every detail the luxury that distinguishes Italian design, offering a high-level lifestyle to its owners and guests, in the tradition of Grand Soleil.’

Is this a potential Maxi 72 racer? Not really, but sort of. ‘Yes, the boat can race with very good performance in the maxi class,’ says project manager Franco Corazza. However, it is primarily a performance cruiser and the main reason for its 72ft LOA is a practical consideration. ‘That’s the ideal size to fit a pullman crew cabin in the stern with a separate bathroom,’ Corazza explains. ‘You can have a threecabin layout with the crew in the stern or a four-cabin layout with the crew in the bow.’

Matteo Polli is the lead naval architect with another of Grand Soleil’s regular design partners, Marco Lostuzzi, in charge of structural engineering.

Hull design
The GS 72 stands out from the rest of Grand Soleil’s current fleet because the naval architecture of the Performance and Long Cruise versions is identical, rather than being designed specifically for one or other of the marque’s two parallel ranges. ‘The larger size of the GS72 allows us to combine the peculiarities of both lines on the same hull,’ Polli says. At a smaller size the compromises would be too significant.’

‘The hull has a very wide maximum beam that extends to the stern, although the beam at the waterline is quite narrow,’ he says. ‘It has a long overhang and soft, high chines. The volume distribution longitudinally and vertically is designed to reduce wave drag as much as possible and to maintain optimal longitudinal trim across the full range of heeling conditions.’

Below: Two semi-custom interior options are offered. This three-cabin layout with the crew’s quarters in the bow or a four-cabin version with the crew in the stern 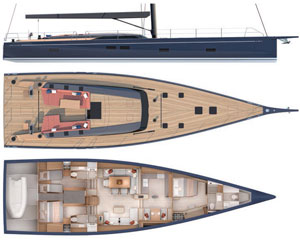 Doesn’t the stern overhang affect performance? ‘Thanks to a plumb bow and very straight buttock lines, the dynamic waterline length can reach the overall hull length very soon as the boat starts to heel,’ Polli says, ‘whereas the static waterline is relatively short. These features make the hull shape morph across the wide range of sailing conditions.’

The hull has a very fine entry and a deep forefoot, which might seem at odds with the current trend of putting more volume, rather than less, into the bow. ‘This choice fully reflects the main aim of the concept,’ Polli says. ‘The combination of fine entry and deep forefoot guarantees a very soft ride in head seas and also helps performance in light to medium conditions. More volume in the bow may help in some specific sailing conditions but at this size of yacht it is much less beneficial than at a smaller size.’

‘The GS72 is designed as an all-rounder but special care has gone into the light-tomedium wind range since that is always the most likely range of use in cruising mode,’ Polli says. ‘It has a very small wetted surface for the given displacement and the waterline when upright is very narrow. Transverse sections are well rounded below the waterline to allow symmetric waterlines for a wide range of heel angles. Above a certain heel angle there is a steep increase in waterline beam and therefore stability that confers the power needed to carry the large sailplan.’

The soft chines come into play at 18° of heel, so 18-20° is the angle to aim for when sailing upwind. Hard chines increase drag, he says, and only give a significant boost to dynamic stability when surfing at very high speed, which rarely occurs on a boat with the GS72’s D/L ratio. Twin rudders were discounted for similar reasons.

The five-ton maximum payload should be plenty for a round-the-world cruise. ‘The difference in performance between half load and full load will be noticeable only in very light wind,’ Polli says. ‘The hull lines have been designed to work on a range of displacements and thanks to the low and central position of the tanks, longitudinal trim will not be affected in different loading conditions. Moreover, when loading the boat, the stability will increase and offer more power to carry sail in upwind and reaching conditions.’

Polli made his reputation with world championship-winning handicap racers but the GS72 has not been designed to any rating system. ‘Nevertheless I have been looking at both IRC and ORC to avoid any major rating penalty, but of course without compromising on the main intended use of fast cruising,’ he says.

Keel and rudder
The hydro package is the same for both versions but five keel options are offered. ‘A 3.7m fixed keel is standard,’ Corazza says. ‘3.2m and 4.2m are options along with a 2.7m-4.4m telescopic keel and a lifting keel too.’

The single rudder blade has a high aspect ratio and is positioned very far forward in the hull. ‘These characteristics make the steering reliable and efficient at high heel angles,’ Polli says. ‘The blade area is relatively large, preventing dangerous “out of control” situations even when reaching fully powered.' 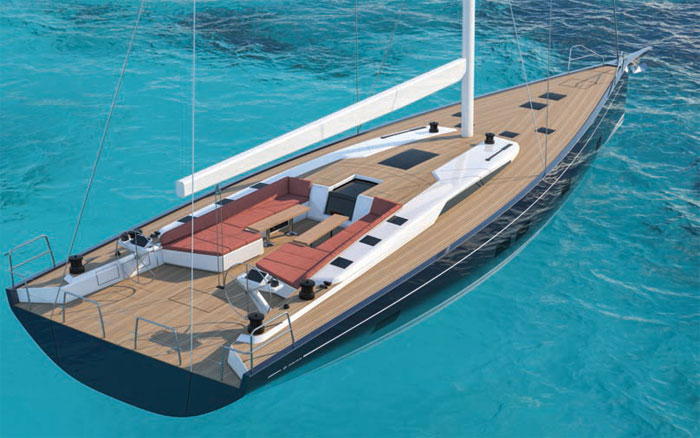 Nauta Design is well known for innovative deck and cockpit plans, which gradually evolve over hundreds of projects. Key refinements on the GS 72 include fully teak-clad cockpit coamings on the LC version, and the Performance version’s aggressively sleek, ultra-low profile coachroof. ‘Both versions feature a big manoeuvring cockpit aft and a large, comfortable central cockpit for guests with two coffee and dining tables that can be used separately, just aft of the coachroof,’ Nauta’s Massimo Gino explains. ‘These two cockpits are connected by a relaxation area, where two magnificent sunpads dominate the scene. The LC version has a sleek, modern coachroof with a full-beam raised saloon beneath (as it’s not bound by the width of the coachroof), allowing guests a panoramic 270° view on the surrounding seascape.’

The interior design of the GS72 takes the familiar Grand Soleil style to a new level, with a superyacht standard of fittings throughout. ‘There are several improvements in the finishings and we emphasise the use of white and pale colours,’ Gino says. ‘You can see that in the white lacquered panels on the bulkheads and on the internal hull sides, which create brighter and fresher interiors. The interiors are rich and light; they convey feelings of peace, serenity, physical and mental freedom. The design and the various palettes of the materials make for sober, fresh, elegant, cozy and welcoming style.’ 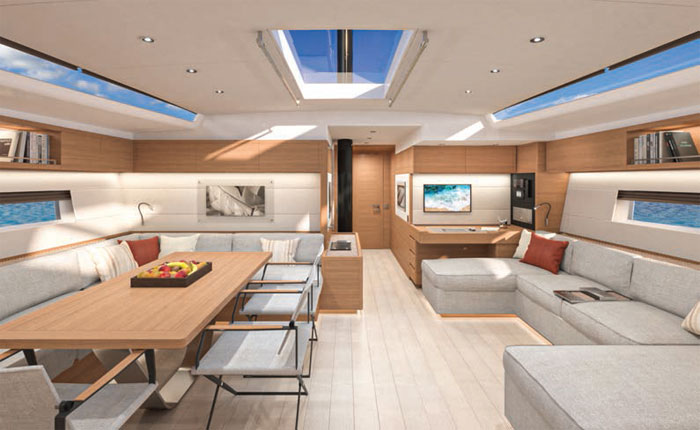 White lacquered panels on the bulkheads and hull sides help to freshen up the interior, combined with pale upholstery and a bleached hardwood sole

Sailplan and rig
The standard sailplan is 9/10 fractional with a 130sq m self-tacking jib or a 145sq m genoa, a 180sq m pinhead mainsail with in-boom furling or slab reefing, a masthead code zero on the bow with an under-deck furler and a 500sq m gennaker flown from the end of the bowsprit. An inner staysail on a furler can also be fitted. The foretriangle (and hence the self-tacking jib) is notably large and the swept-back spreaders allow a 112% J1 on longitudinal tracks.

Aluminium spars with rod rigging are supplied as standard and a carbon upgrade is available. Runners are only required for the inner sail. The sail-handling systems are electric, with three-speed Harken primary winches as standard and the dedicated mainsheet winches.

The rig is large enough that a pinhead mainsail will supply ample power even in light winds, but changing the main to a square-top should be relatively easy with the central mainsheet winch.

The sailplan calls for three reefs. ‘The first reef is taken when sailing upwind at 16-17kts TWS thanks to the high stability of the hull shape,’ Polli explains. ‘The second reef will be taken in combination with the use of the staysail at about 24kts TWS. The third reef will only be needed well above 30kts.’

Construction The LC version is just 500kg heavier than the Performance version, with identical construction techniques and materials used in both. The emphasis here is on tried-and-tested technologies. 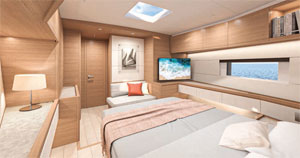 Above and below: The master suite is in the bow, far removed from the noise of the boat’s sailing and hotel systems with a king size berth, large lateral windows and the en suite heads up forward. It’s an ideal arrangement for daysailing between anchorages and general short-range cruising use 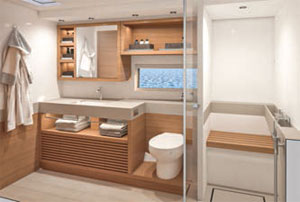 ‘The GS72 is a fast cruiser with high levels of performance and comfort; with that idea in mind we made some precise choices about the construction of the boat,’ Lostuzzi says. ‘The whole boat is built as a composite sandwich with vacuum infusion to obtain a rigid, lightweight and high-quality construction. ‘We decided to use epoxy vinylester resin which has a very good cost-benefit ratio, and also because in the case of dark hull or deck painting it is very resistant to heat, even when post cured at low temperature.’

‘We opted for E-glass fibres all over the construction with key areas reinforced with unidirectional carbon fibre to improve its rigidity. Again this choice was made to match the characteristics of the design. A full carbon build for sure would be lighter but at the same time much more difficult to soundproof.’

How fast? Polli’s VPP suggests more than 10kts upwind. ‘Reaching is more difficult to state precisely but we can expect to achieve well over 20kts,’ he says. ‘In light wind the boat will be reactive and fun to sail both upwind and reaching, with a target speed of 6.2kts upwind and 7.5kts on a beam reach with 5kts TWS (at 10m height).’

Under power, the standard engine and tankage should give the Performance version a range of 750nm and the LC version about 900nm. A diesel-electric hybrid option will soon be available.

Construction of hull no1 is well under way and the GS72 is due to make its début – industry-wide supply chain issues permitting – at the Genoa and Cannes Boat Shows this autumn.