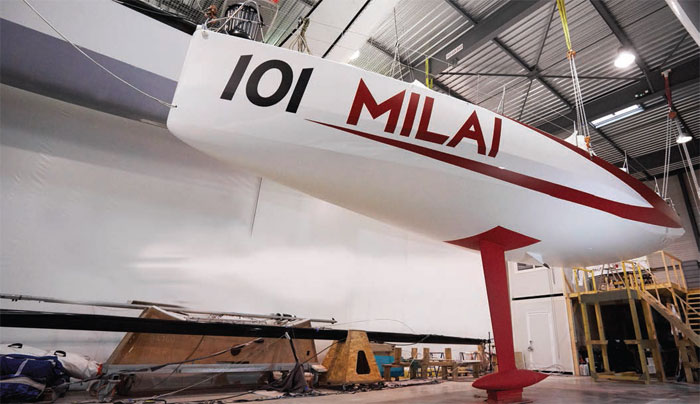 Most sailors know Nautix antifouling. They’ve built a great reputation for that in the last 40 years starting from scratch – good going for a small business in Brittany with just 26 staff and a background in windsurf accessories, competing against multinationals. But they don’t just make antifoul. They’ve also developed a wide, innovative range of complete hull protection systems, above and below the waterline, for virtually all hull materials and types of boat.

The full range includes adhesion promoters for GRP, carbon, steel and aluminium, impregnation resins for composites, wood and cast iron, primers for waterproofing and abrasion resistance, undercoats, epoxy fillers for fairing and finishing, thinners, top coats, varnishes and non-skid deck paints. Nearly all of these are optimised for a specific purpose.

‘A key success factor is our close relationships with skippers and boatyards,’ says Matthieu Taburet, co-CEO and commercial director. ‘We develop really specific products, quite unique, which makes our reputation. The development of a Nautix product never stops, it’s always an evolution in research, in development, in formulation.’ A large percentage of turnover is invested in R&D every year, both in-house and in partnership with the University of South Brittany.

Their first paint product, A4T Speed, a hard matrix antifoul with very low drag, initially designed for grand prix raceboats, has been in continuous development for 30 years (and counting). A specialised variant, A9T Speed, was also born out of discussions with ocean racers who needed high-vis fluorescent antifouling for keel fins and rudders to aid rescue after a capsize. A9T Speed also makes it much easier to inspect appendages for flotsam during a race, and its use is now mandatory in some classes.

The inspiration for another pair of game-changing products, PO and PA primers, was the often relentlessly rainy Breton weather. ‘Local boatyards were facing a problem,’ Taburet says. ‘They couldn’t paint in bad weather.’ Epoxy primers must be applied in a narrow band of temperature and need low humidity, but no alternative was available. ‘For 20 years we’ve been the only supplier offering a one-pot PU primer for adhesion and protection against corrosion or osmosis,’ Taburet says. ‘It’s unique in the market and it’s so easy to use: a no sanding solution.’ It’s also the only one-pot primer that can be overcoated with two-pack epoxy or PU paints.

Main picture: many of the world’s best-known and most successful racing yachts rely upon Nautix’s range of complete hull protection systems; in fact several Nautix paint products were originally developed specifically for individual skippers.
Below: Nautix primers solve a range of problems, from adhesion on masts and keel fins to dealing with osmosis and corrosion 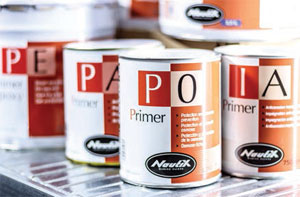 PA and PO are two in a range of seven Nautix primers including universal one-pot, three different two-pack epoxy systems and spray paint for propellers and saildrives. The two-pack primers were developed for boatbuilders who needed a cure for porosity in carbon hulls, but are now used widely for osmosis prevention.

Major production boatbuilders feed their own needs into Nautix’s R&D, but so do individual skippers. ‘We got a phone call from Roland Jourdain who had a huge problem with non-slip during the Vendée Globe,’ Taburet recalls. ‘He had to call his team whenever he went on deck, telling them if he didn’t call back in 10 minutes, that meant he was in the water.’

To solve that, Nautix developed transparent non-slip deck paint, so sponsors’ graphics are clearly visible without compromising sailors’ safety. ‘It’s now a standard product used on many boats and we have adapted it for different parts of the deck,’ Taburet says. ‘In the cockpit you need very hard non-skid paint; on the side decks it’s a bit softer to avoid rope abrasion.’

Another unique and functional product is CoolBlack, developed with BASF on behalf of Alex Thompson Racing. With any other paint system, black decks are impractical due to extreme heat absorption. BASF had an infra-red transparent black pigment and an infra-red reflecting white, which when used together reduce the heating effect by 30 per cent, ‘but they didn’t have experience in marine paint application, so Alex Thompson’s team introduced them to us and we helped with the formulation.’

Metapox and Metathane adhesion promoters are the key to the remarkable success of Nautix paint systems on surfaces that were once widely considered impossible or impractical to paint. Again, the initial requests came from racing teams who were struggling to paint their stainless steel keel fins but a growing number of professional applicators are using them on aluminium masts, and others have discovered a technique with Nautix PO primer that works equally well.

‘Whether you’re a pro racer or an amateur skipper I’m always happy to talk by phone or email because it’s our job to explain and to be close to our customers, to offer the right solution,’ Taburet says. ‘We’re always learning from skippers who use our products and thus we improve them step by step.’