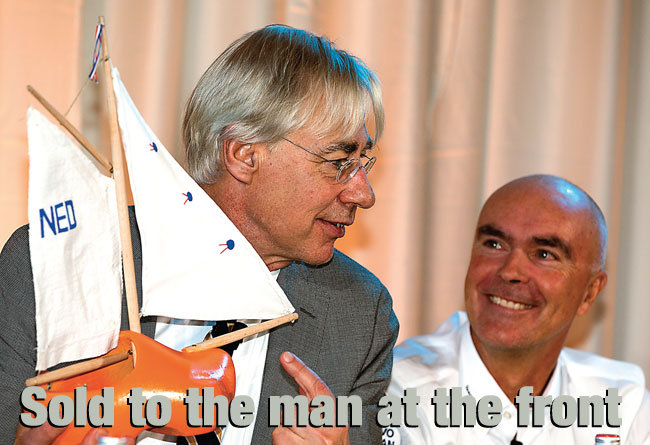 Enthusiasm flows from every pore of this Dutch legend of ocean racing. Well beyond the first flush of youth, Bouwe Bekking is about to tackle the upcoming Volvo Ocean Race, his seventh involvement, at the age of 50. But he shrugs off the years by saying: ‘I’m feeling young!’ He looks it too.

Bekking’s international sailing career started as a helmsman for a Dutch boat at the 1983 Admiral’s Cup, at the time a pinnacle of the sport, but two years later he was back in Cowes as a driver aboard Philips Innovator in the Whitbread Round the World Race, finishing second overall on handicap. Bouwe’s next foray into the race would come eight years later, when he was one of Dennis Conner’s crew on Winston in the new 60ft water- ballasted class.

By this time Bouwe was hooked on the race and in 1997 he raced with Grant Dalton to finish second aboard Merit Cup. In the new millennium he stayed with Dalton to race Amer Sports One to third place in 2002 in what was now the Volvo Ocean Race following its change of ownership. The race changed three years later with the introduction of the Volvo 70 class and this time Bouwe, as skipper of Movistar, tackled a start- studded fleet in a race summed up by one crewman, who declared: ‘I left my girlfriend, good food, a dry bed and a hot shower to hang around out here struggling with wet sails and 12 smelly guys and a pretty fragile raceboat…’

For Bekking the discomforts don’t detract from his enjoyment of this epic race. As he says: ‘Sailing is usually good, but then again I think every leg has points where you think “Oh, this is maybe not so nice, I’ll never do it again”, but the reality is you forget the bad parts so quickly… maybe too quickly.’

Of the family’s involvement, skipper Bekking considers it very much part of his campaign. He says that his wife, Rikke, does not know any different: ‘There are choices she has to make and, of course, we discuss it before it gets full steam ahead, but it is very much part of our life. Just like my 15-year-old daughter, Laura, she “lost” the last race (with Telefónica Blue in 2008/9). ‘But she comes to all the different places. It is always tough on the family, we know that, but we have been coping very well. We still love each other very much, that is the most important thing.’

On the suggestion that the pressure on the family might be fairly intense, Bouwe showed his understanding: ‘There is always pressure on them, especially during the harder parts of the races. It’s getting and reviewing all the news reports. I think it is sometimes harder on the people sitting back at home than the people onboard because we know exactly what we are doing, and they are getting all these horror stories about the boats. Sometimes they get more worried than they should be.’ He agreed, however, that it was hard on the family, but was adamant that it was a choice, saying: ‘But once you make the choice you go at it 100 per cent.’

Nevertheless, this family man is about to advance to another race around the globe. And this one promises to be different from its predecessors as it will be held in boats that are exactly the same as each other in all respects – the only way of telling them apart is by the colour of their paint jobs (Bouwe’s boat will be orange and black). This has made a huge difference in terms of the costs of the campaigns compared with the races that went before. There is no longer any need for a boat design programme, nor for appendage research or dozens of shore-crew. Gone too is the sail development programme – this time the sails too are all one-design.

This comes as a considerable relief to the Dutch skipper: ‘I am looking forward to it a lot,’ he said. ‘With the one-design concept I feel sure the racing will be just as interesting – most likely more interesting. That is my opinion.

‘We almost certainly wouldn’t have found the funding over here had the race not gone one-design; the funding right now is substantially less than what you needed to make a campaign successful previously.’

The new boats are 65ft overall, the same size as the winners of the first two Whitbread races (Bekking’s first race was on a 63-footer), but they were very different boats. Bekking believes that since the boats now are all the same this race might be more demanding in terms of navigation and strategy than previous races. ‘I believe it will be bloody important. That is my opinion. But I also know that some other people have different thoughts.

‘Personally, I think strategy will be absolutely crucial. Of course, you still need the fast drivers, the good trimmers – the whole package has to be right.’

Top: Brunel CEO Jan Arie van Barneveld offers design suggestions to his new race skipper Bouwe Bekking…
Below: the control ergonomics of the new VO65 follow more of an Imoca 60 theme than anything seen on previous VO70s, with a large line tunnel, multiple clutches plus a powerful multi-purpose pit winch 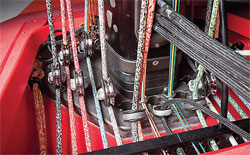 One of the options that some teams are considering is dispensing with a full-time navigator in favour of an extra hard-pushing helmsman. When questioned on taking a specialist navigator, or relying on his own skills, Bouwe admitted: ‘I am looking around right now and of course that is one of the options that we have, but I think it will be pretty rash to go without a skilled navigator.’ He did hint, however, that the navigator would have to share in the sailing duties much more than before.

Interestingly, looking back at his previous races, Bekking considers none of the sailing to be particularly headachemaking, it has been the arrivals in port in the past that have been his biggest bugbear: ‘You would often arrive in port to find that nothing was properly organised,’ he said. ‘This time, however, we know that all the stopovers will be very well organised, particularly with much of the shore crew shared between the boats. Before, the sailing was always the easy part. As soon as you hit the shore, that was where the problems were – especially for the skipper.’

For the 2014-15 Volvo Ocean Race, as all the boats and their gear are identical, it makes commercial sense for the organisers to arrange the bulk of the shore facilities. ‘In the past there were so many people in the shore team, 20, 30, sometimes 40 people. Now the team is much smaller,’ he says. ‘All these were things that you had to worry about. Basically, thank you, Mr Volvo, it is your problem now. Make it happen. And they can make it all happen, I know, because they must.’

This will reduce the team’s size dramatically – in addition to the nine sailors, in the case of Brunel there will be a total of six who are working ashore, less than half those required to keep a Volvo 70 team in business. Several others will also be working directly for the sponsors Brunel and Volvo. ‘This makes a massive impact on the overall budget – the payroll is a fraction of what we spent previously – all thanks to the one-design concept.’

When it was suggested that because he was the most experienced of the skippers so far announced, Bekking would be confident of his chances of winning, he demurred: ‘If you don’t believe in yourself any more you are not doing the racing properly. But, on the other hand, we know as well that there will be some other good teams in the race, and we just have to make sure we are as good as the other ones. It comes down to us to perform.’

Far from being a late starter in his preparations, Bouwe sees his entry to the battle ahead as no disadvantage. ‘We still have every chance to do well, he says, ‘The girls [in SCA] have a head start, we just have to work hard and use the experience we have to transfer our considerable knowledge from big offshore designs into these new 65-footers.’

Bekking also believes that the new boats will prove to be similar in overall performance to the Volvo 70s. ‘They will still be soaking wet but structurally stronger and easier to steer and drive hard in a seaway.’

So far only his partner in Sailing Holland – an organisation to establish a Dutch team for this race – Gerd-Jan Portman, has been confirmed as one of the nine members of the Brunel crew, but many of the rest are expected to come from Holland. This is very much a national effort and Bouwe Bekking appears extremely comfortable to have widespread support from the Dutch people already.