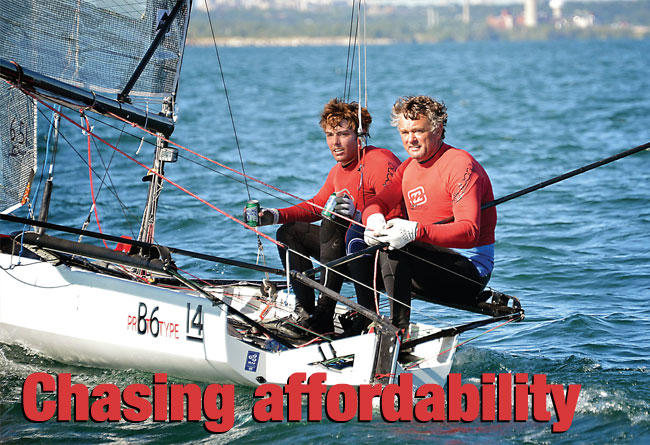 The International 14 has never been a cheap boat. Twenty years ago, not long after the introduction of twin trapezes and asym - metric gennakers, a Morrison-designed 14 built by Jon Turner cost £14,000. £1,000 per foot of carbon fibre raceboat. Twenty years later the price of a top-flight 14 has almost doubled – a professionally built, ready-to-race 14 costing around £25- £27,000. This is probably not that far out of line with inflation, but numbers in the fleet have dwindled compared with the heyday of the late 1980s and early ’90s.

It was in the late ’80s that the International 14s joined forces with the Australian 14ft skiff class, organising a combined world championship in San Francisco in 1989 before the Aussie 14s were fully merged into the International 14 fleet. Despite the high cost of the boat the 14 class’s pioneering move into twin-trapezing and asymmetric gennakers attracted huge numbers to the startline of major regattas. If you wanted high-performance thrills the 14 really had no competition.

But since then we have seen a massive growth of one-design twin-trapeze classes, starting with the Laser 5000 and Topper Boss which have since fallen by the wayside, and later with the 49er, the RS800 and a few others besides. The 14 has also lost its mantle as the biggest thrill ride in dinghy sailing, with the International Moth claiming the kind of numbers and high profile that the 14 enjoyed 20 years earlier.

So what to do? Take the bold step of turning the T-foil ruddered 14 into a fully foiling beast like the Moth? The Moth is not a cheap boat, but as a foiler it is virtually unchallenged. Apart from a few oneoff experiments with foils on 14s and 49ers, there is no doublehanded foiler on the market. The 14 could claim that space. But would it make a challenging boat too intimidating for all but the bravest of sailors to contemplate?

For the time being the class has decided to stay away from full foiling and is focused on incremental developments such as weight reduction, with wider wings and taller rigs also being discussed. Recent years haven’t seen any major changes, with Archie Massey winning the last four world championships in a modified Bieker 5 design that he first sailed in 2006. But Massey’s boat was from a short construction run of just a few boats, and the UK fleet decided it needed a new ready-to-go package at an affordable price.